Home Autos Plugging into the future: Next stop is electric vehicles – Gulf Business 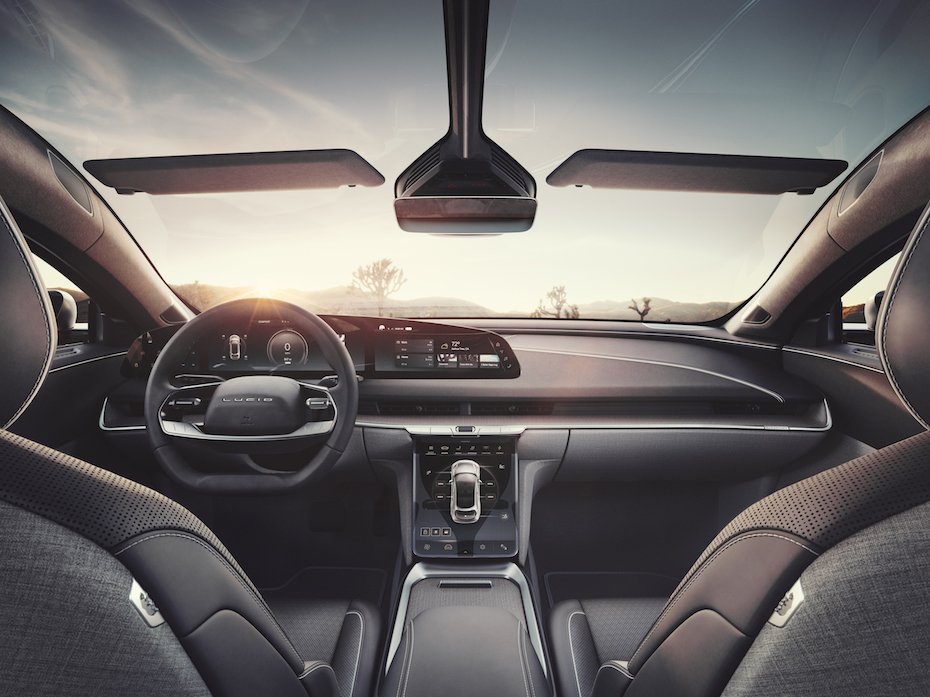 Where the sovereign wealth fund of one of the richest countries in the world chooses to pump in over $1bn, rest assured there is a bountiful harvest to reap. In 2018, Saudi Arabia’s Public Investment Fund backed California-headquartered Lucid Motors – a relatively new American company which is now baiting one of the world’s most valuable carmakers, Tesla.

Lucid isn’t just shooting its lip. At its helm is Peter Rawlinson. Remember the Tesla Model S? It’s impossible not to, considering it has become the most successful electric sedan manufactured to date. Rawlinson was the chief engineer on that car, and reportedly a confidant of Elon Musk.

“It’s a testament to the vision of the kingdom of Saudi Arabia and to the vision of the Public Investment Fund that they have the foresight to invest in the future of not just mobility, but the future of energy and energy use,” Rawlinson tells Gulf Business, while adding, “and to recognise that oil will not be there forever. This is a very shrewd move on the chessboard for them.”

A study by Allied Market Research suggests that the electric segment is expected to record a compound annual growth rate of 9.7 per cent from 2019 through to 2026.

Carmakers have scrambled to electrify their fleet. The Porsche Taycan is a full-electric car, Mercedes EQS is in the advanced stages of being realised, and Audi recently showcased its Q4 Sportback E-Tron concept.

But while the future of the luxury auto sector will undoubtedly belong to electric cars, the present is dominated by ozone layer denting internal combustion-powered machines. Take, for example, Rolls-Royce – a 116-year-old marque that still has a minimum of 12 cylinders in a car. It’s a carmaker that shifts the goalpost from electric to craftsmanship around its wood, paint and leather – all of which the Goodwood manufacturer has excelled in.

“At Rolls-Royce, there is no full-option car – it doesn’t exist. There is always something more you can do with a Rolls-Royce,” says Mamdouh Khairallah, general manager, AGMC at Rolls-Royce Motor Cars in Dubai.

“When it comes to us in the Middle East, our most expensive Phantom was in the range of $4m. We had one car we built in the factory where we crushed diamonds into the paint. The price of the paint alone was almost Dhs1.5m.”

But even Khairallah agrees that it is impossible for the luxury car industry – Rolls-Royce very much included – to ignore the writing on the wall.

“The future is electric cars. Internal combustion engines will not sustain the future. Rolls-Royce engineers are busy at work on future electric cars.”

Stunningly, even Rolls-Royce CEO Torsten Müller-Ötvös said during a television interview in January that Rolls-Royce will transition to electric this decade and will become a “pure-electric propelled” brand in the long-term.

The long-term couldn’t arrive sooner for countries like China, the world’s largest auto market since 2009. The government wants ‘new-energy vehicles’ to make up at least 15 per cent of the market within the next five years by 2025, and double that a decade later. Legislation is already coercing the transition.

In Shanghai, for example, car buyers have to pay an additional $13,000 for the licence plate of a combustion engine car, whereas that amount is waived completely for electric vehicles.

“For us, it is the grand prize,” says Rawlinson, referring to the China market, where he intends to take the all-new Lucid Air sedan in late 2022, months after it enters production at the Arizona factory in spring 2021. For now, Lucid is focused on getting the price right.

“The biggest area where the price point of electric cars is going to be influenced is in two areas: battery technology, and global efficiency of the complete system.”

Addressing the former, Lucid has claimed a 517-mile range on the Air (far more than a Model S’ 348-mile range), and with regards to the latter, it has tied up with Electrify America charging network for its cars that will be sold in the US.

The International Energy Agency said earlier this year that the number of public charging spots were 862,118 worldwide, with China accounting for 60 per cent of that figure. But not all luxury carmakers see China as the grand prize.

“China will stay as an important market, but the US, Europe and Middle East are still doing well. I would not see the Chinese market as singlehandedly taking the [luxury car] business forward,” cautions Khairallah.

At the start of the year, Rolls-Royce said that it had its most successful year ever in 2019, with 5,152 deliveries spread out across over 50 countries. Apart from China and the US, the Middle East is one of the strongest markets for luxury carmakers. And there’s innovation rising from the region too.

Dubai-based W Motors, which manufactured the $3.4m Lykan HyperSport car, said in January that it had begun work on a Dhs370m manufacturing facility in Dubai’s Silicon Oasis. Its founder Ralph Debbas confirmed to Bloomberg in February that investment bank Guggenheim Partners were hired to assist in raising up to $100m to help it begin manufacturing electric cars within the next 4-5 years.

Making a more rapid entry will be Lucid, which plans to enter the region via Saudi Arabia next year, followed by other regional markets by 2022, alongside a near-simultaneous rollout in Europe.

But with EV sales in Europe, surprisingly, exceeding China in the first six months of 2020, according to global automotive research firm Jato Dynamics, it may even be Europe that will leap ahead of the Middle East, China and the US for electric cars.

BloombergNEF revealed recently that although the sales of EVs fell 15 per cent globally in Q2 2020, it is forecast to expand around 7 per cent for the full year of 2020, led by Europe.

“Who knows which markets can be penetrated with the sudden availability and advent internationally of a true luxury car which is pure battery-electric – the sky is the limit,” says Rawlinson.

To drive into those markets, carmakers are also carefully considering the kind of vehicles they’re pushing – especially SUVs.

“Many people were surprised that we didn’t start with an SUV. The Lucid Air is a car that is smaller on the outside than a Porsche Taycan, and yet it’s got more space than a long-wheelbase S-Class Mercedes. We’re going to take that to a whole new level with Project Gravity,” says Rawlinson of Gravity, Lucid’s first SUV, set to enter into production in Arizona in spring 2023.

Mamdouh agrees that within the Rolls-Royce electric future, SUVs will be a mainstay, mainly because of the success of its current gasoline-powered Cullinan. “The [Cullinan] SUV is now the most successful car in the entire family of Rolls-Royce. It is our bestseller. Rolls-Royce has enhanced that by adding the Black Badge Cullinan beginning this year.”

Apart from the products themselves, luxury carmakers are also rethinking their retail strategies. Rolls-Royce, for example, ties up with other luxury product manufacturers – watchmakers, jewellery artisans, carpet weavers, etc – and displays their creations alongside the cars in the boutiques, creating an all-encompassing sense of curated luxury.

For Lucid motors, there is a comprehensive digital push when it comes to its retail strategy augmented with an online configurator. “No other car company – BMW, Mercedes, Porsche, Jaguar, Lexus, even Rolls-Royce – has got that level of a digital configurator which we’ve got that places the car in a three-dimensional moving environment.”

He quickly adds, “I still believe, paradoxically, that even in this digital internet super connected environment, there’s still place for bricks and mortar. Personal interaction is crucial in the luxury space and you want to aim to control it. We own all our stores and we aren’t going to have dealerships.”

Lucid’s newest store opened in Beverly Hills, just along Rodeo Drive, at a site which was formerly occupied by a Rolls-Royce showroom.

Not all carmakers are equally sold on the idea of an imminent and immediate need to go electric. Aston Martin, for example, which received a $663m infusion of capital earlier this year and a new executive chairman in Canadian billionaire Lawrence Stroll, has not only indefinitely suspended plans for its Rapide E electric car, but has postponed the launch of its all-electric sub-brand, Lagonda, from 2022 to 2025, at the earliest.

Unconfirmed media reports from September this year indicated that VW is mulling selling Bugatti to Croatian electric supercar manufacturer, Rimac Automobili, showing Winklemann might eventually have got more than he initially settled for.

While carmakers course correct, the Covid-19 pandemic has launched an altogether stark assault on their businesses.

“When it comes to the luxury segment, we are in a U-shaped curve,” says Khairallah adding that factory closures or the pandemic worsening could very quickly change that situation. “But the recovery is definitely going to be more Ws all the way.”

Rawlinson makes a different point altogether, while saying that focusing on the academics of the recovery pattern is really a futile exercise.

“This is a myopia about short-termism. It doesn’t matter if it is U-shaped or V-shaped. A lot of those car companies are going to be dead in 10 years, because they aren’t adopting electric fast enough. There is an existential threat to their very existence and they can’t even see it.”

A carmaker which has seen, and acted, on that threat before most others is Tesla. In October, it revealed revenues of $8.7bn and profits of $311m for Q3 2020. At the time, its share price had already climbed over 400 per cent since the start of this year alone.

COMMENT: An unbalanced approach to EV infrastructure is doomed to fail – Automotive World