Back in March 2019, I noted that the consumer VR headset market was becoming overcrowded and confusing — the result of a glut of questionable new offerings — while the enterprise VR market was becoming interesting. “If you’re in the C-suite and looking to buy some cutting edge gear, this is an especially exciting time for VR hardware,” I said, “though I expect a lot more innovation over the next year.”

Flash forward to today, and the real and virtual worlds have both changed even more than I expected. On the predictable side, some of the aforementioned VR headsets have already fizzled out, and Facebook’s Oculus Quest has won kudos as a standalone VR platform. Unpredictably, the COVID-19 pandemic shut down conferences, offices, and movie theaters, suddenly making VR a viable medium for both social gatherings and entertainment.

While Quest has become the go-to VR headset for general consumers, Pico is challenging Quest’s enterprise bona fides with similar but higher-end models called the Neo 2 and Neo 2 Eye. With the $699 Neo 2, you get the same 128GB of storage and Qualcomm Snapdragon 845 chipset as a $499 Quest, but a noticeably higher 4K resolution per eye. For a further $200 premium, the Neo 2 Eye adds dual-eye Tobii gaze tracking. Yes, $899 isn’t cheap, but it’s less than Oculus’ $1,000 Quest for Business platform. And like Quest, each Neo 2 can be used as a standalone device or connect to a PC; for the latter, Pico uses Qualcomm’s wireless “Boundless XR” over Wi-Fi 5. 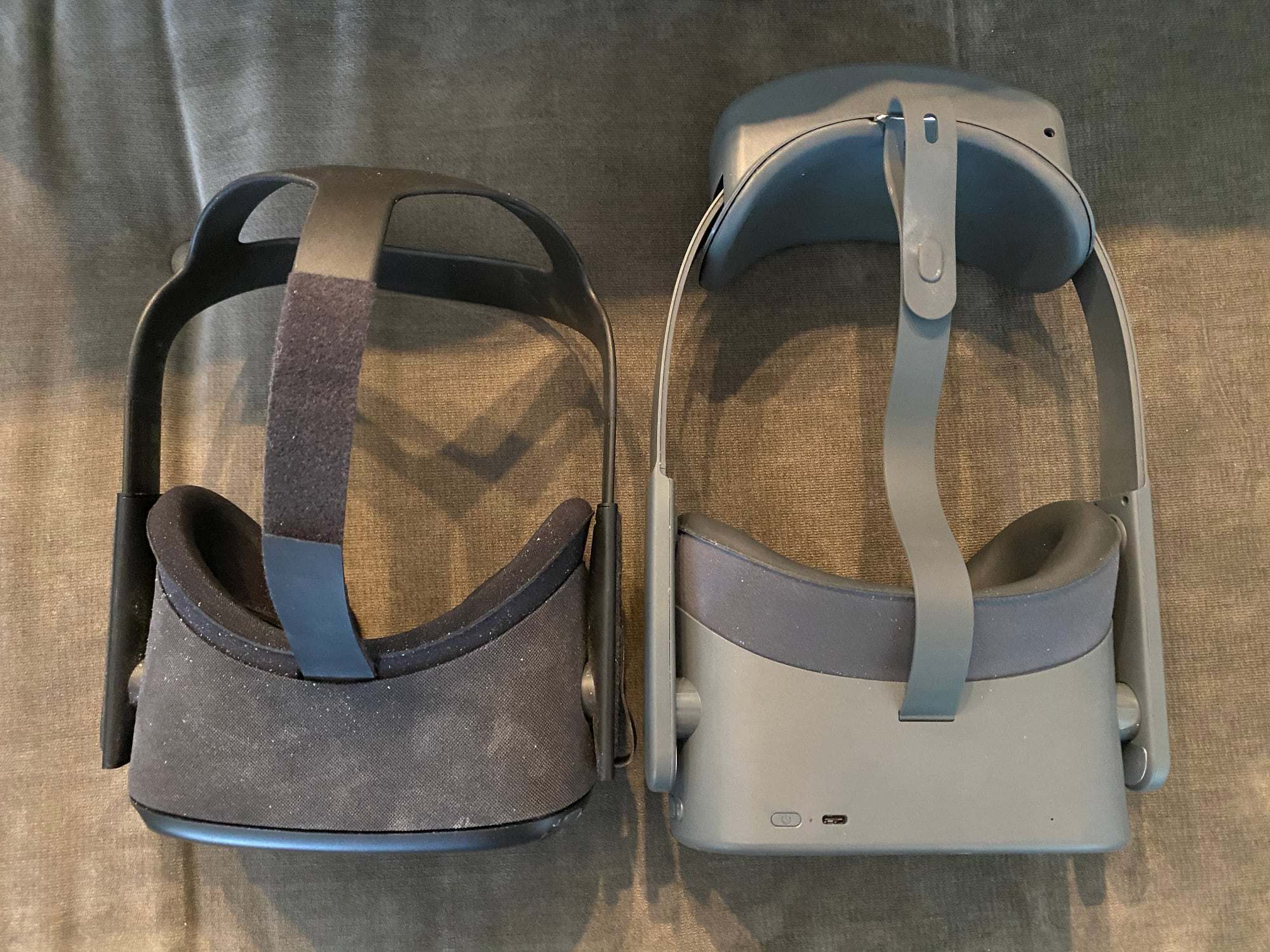 In short, Pico is giving enterprises early access to some key next-generation display and eye control technologies today, when Facebook appears unlikely to ship a standalone headset with either feature in 2020 — perhaps not in 2021, either. The key question is whether enterprises will be willing to pay Pico’s non-trivial premiums for the superior hardware and deal with the Neo 2’s ergonomic rough edges.

I’ve been testing the deluxe Neo 2 Eye since last week, and the experience has been simultaneously surprising and interesting. At first, I was shocked by how similar the Neo 2 and Quest experiences feel, if Pico customers don’t mind losing some of Oculus’ design flair and polish. After turning the headset on, Neo 2 users see a version of Oculus’ protective virtual perimeter-defining Guardian, which lacks the fancy UI and branding, but includes the same basic dialog boxes and a black-and-white passthrough mode. 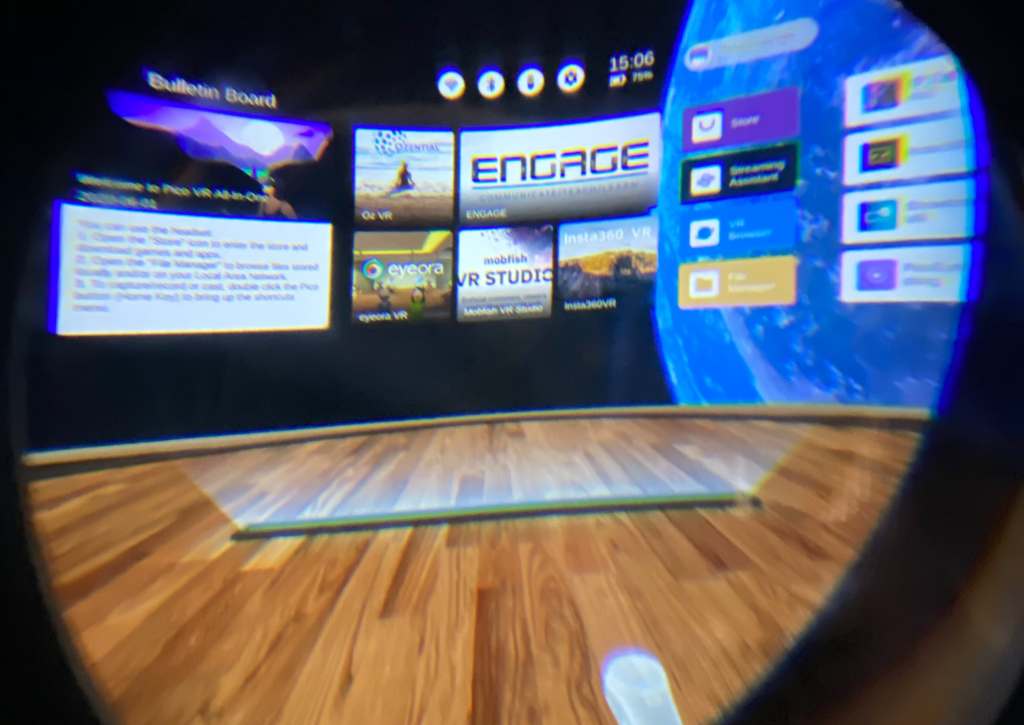 Above: A view through the Neo 2 Eye’s lens at the home screen.

Then there’s a home screen interface that might as well be the same as the one on Quest, but higher in resolution. Assuming you align Neo 2’s Fresnel lenses properly with your eyes, you’ll instantly notice a markedly higher display resolution than the Quest: 1,920 by 2,160 (4.1 million pixels) per lens, up from Quest’s 1,440 by 1,600 (2.3 million pixels). The difference in detail is striking; it’s much harder to see individual pixels, and there’s no obvious “screen door effect” when using Neo 2. This is particularly impressive given that Pico is using the same processor found in the Quest, just equipped with more RAM to assist with the visuals. 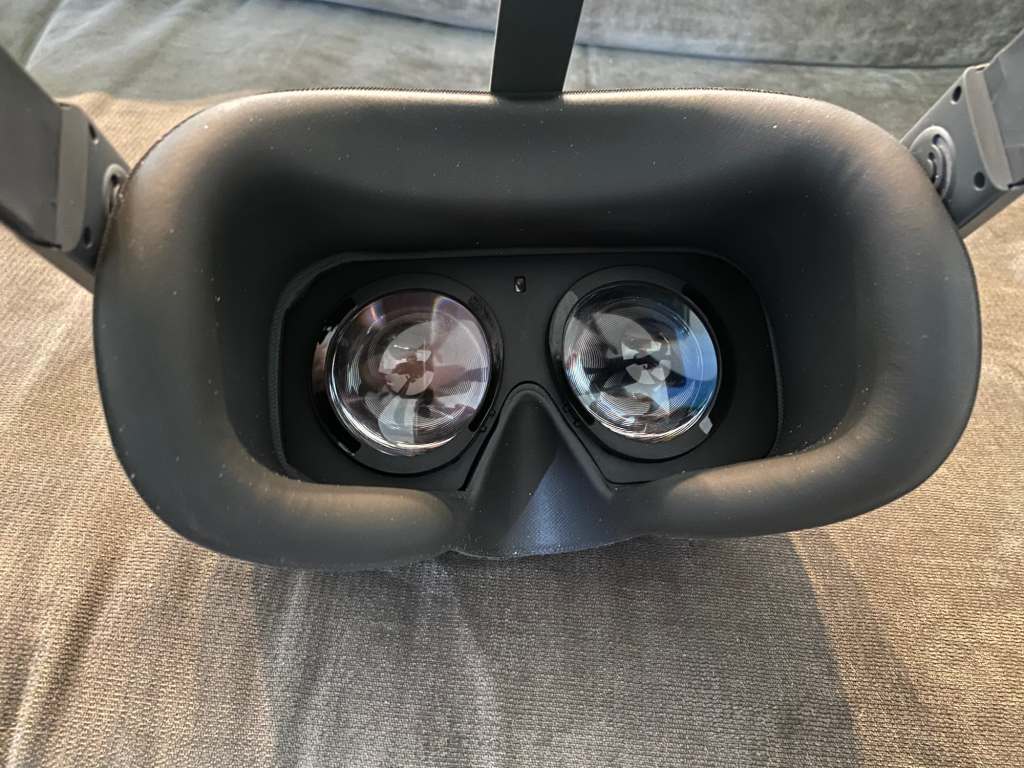 The Neo 2 includes some demos that show off how the higher resolution will work in practice, and after seeing one of them — a plausible virtual movie theater where the screen actually had the crispness I’d expect from currently shuttered cinemas — I was sold on the headset’s ability to deliver not only a next-generation viewing experience, but something that mid-pandemic/post-pandemic consumers would appreciate. Putting ergonomic considerations aside, I could see myself enjoying a full theatrical movie in this headset, and becoming more immersed in less pixelated 360-degree content. That said, it remains to be seen whether enterprise users will care, and how Neo 2 will perform with more processor-taxing 3D applications.

Resolution aside, the standard Neo 2 isn’t a wholesale or even major reimagining of Quest. Pico’s 75Hz refresh rate isn’t perceptibly different from Quest’s 72Hz, and there are plausible rumors that the next Quest (Quest S) will move to 90Hz in 2021, reducing nausea potential for users. Additionally, I hunted through Neo 2’s settings and couldn’t find the software-based IPD (inter-pupillary distance) adjustment tool that Pico claims to include; Quest has an IPD adjustment lever built directly into its housing. 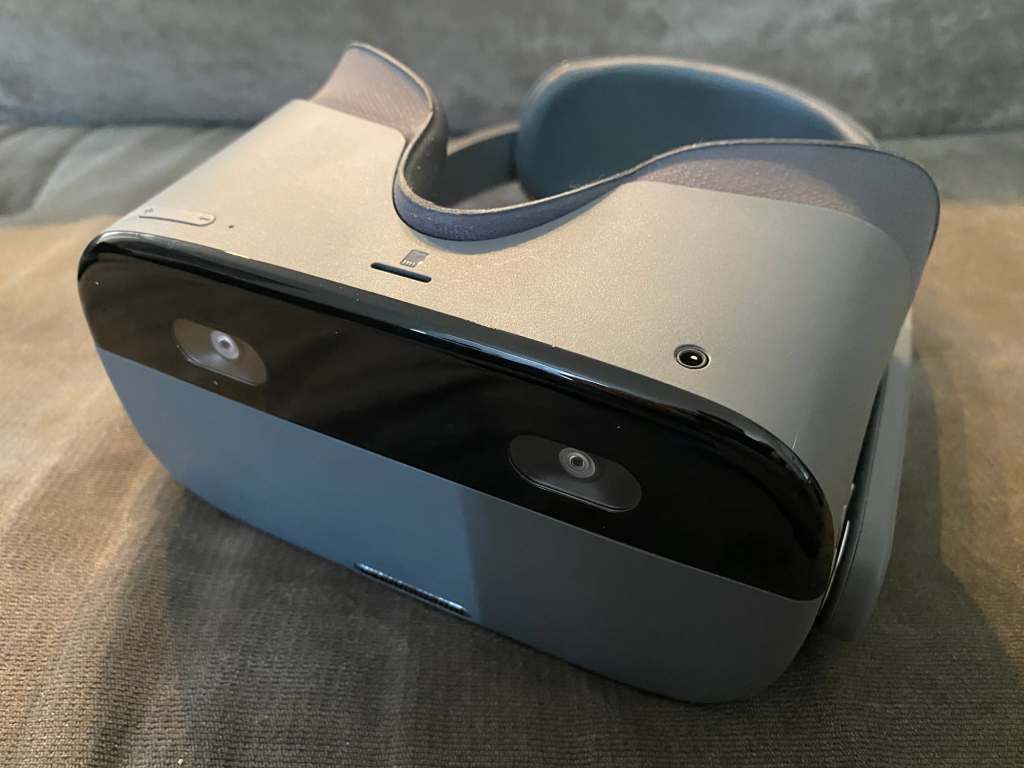 If your enterprise is willing to pay $899 per headset, the Neo 2 Eye adds a second differentiator: fully integrated Tobii eye tracking. Tobii’s Spotlight system checks your eyes 90 times per second, using the positions of your retinas for cursor movement. Some extremely basic demos are included with the Neo 2 Eye to show how your gaze can be transferred into a virtual avatar or used to highlight objects in a room, but I couldn’t find anything wow-inducing in the examples.

Neo 2 Eye developers will be able to use the Tobii system to offer foveated rendering, a game-changing feature that lets a VR headset maximize detail where you’re looking and reduce it in the periphery. None of the headset’s included demo software let me test the foveated rendering, but Pico says it can increase frame rates by up to 66% and reduce shading loads by up to 72% — nice gains, assuming an enterprise is willing to pony up for the more expensive Eye headset and then buy or code apps specifically made to support the hardware.

There are some other design considerations with the Neo 2 headset that merit attention. I found that I needed to align the headset in a somewhat uncomfortable way relative to my ears to have it properly track my eye positions; following the in-headset alignment instructions, the stiff headband presses down enough on my ears to make them fold down. Further ergonomic improvements to the headband (or perhaps ear surgery) would help me make more of this feature. 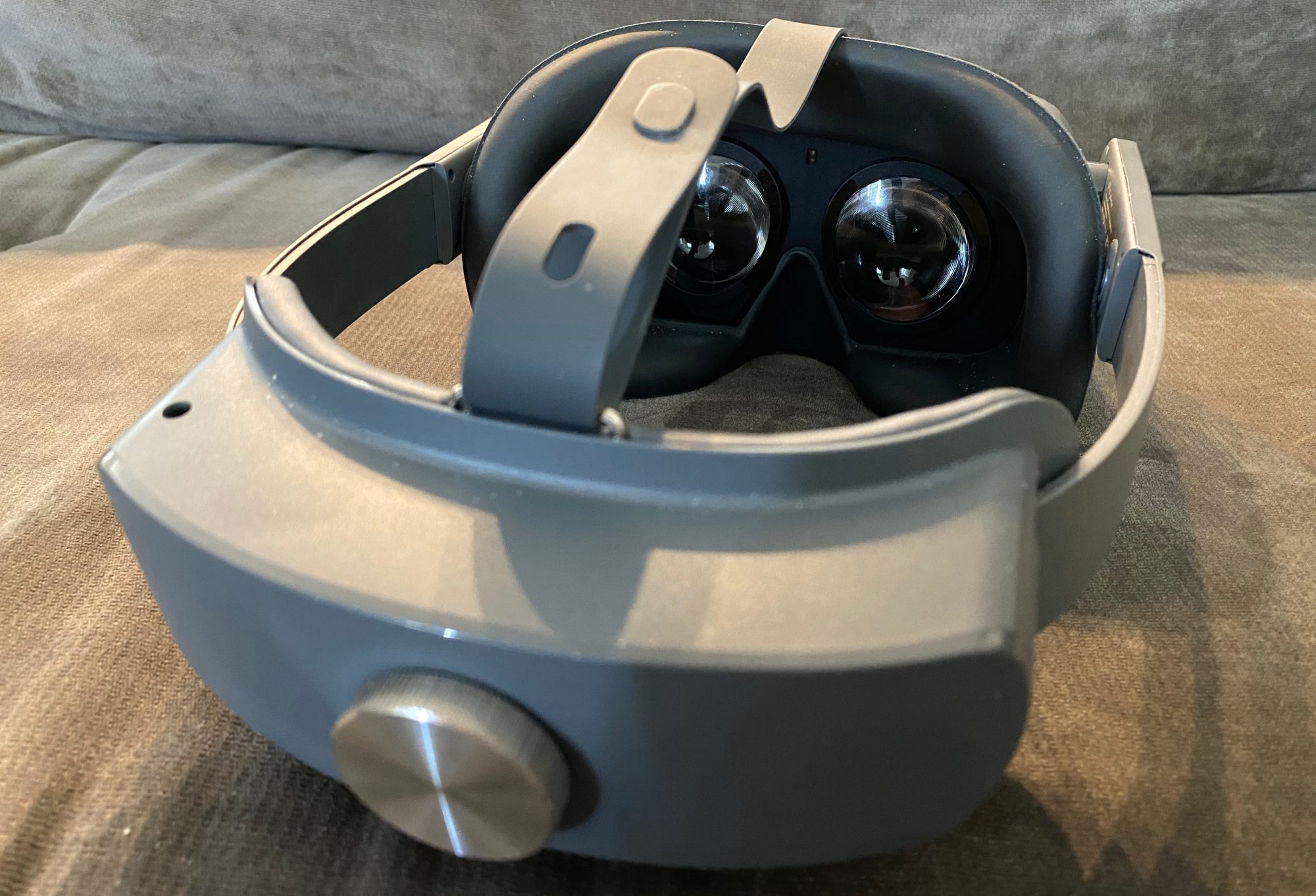 Also interesting: Neo 2 simultaneously manages to be as large as the Quest in front and much larger in the back. Unlike the Quest, which uses a soft plastic and Velcro strap in the back of your head, Pico includes a large plastic compartment on the rear with a tightening dial for fit adjustment, plus a second (3.5mm) power port as an alternative to the USB-C port on the headset’s top front surface. This seems unnecessarily complicated compared with the Quest, but Pico may have had good reasons to pursue a different design.

For instance, the Neo 2 manual suggests that a WiGig/802.11ad version of the headset will be available, and it’s possible that the 60GHz antennas or some other hardware will be located in the back, rather than close to your face. It’s also possible that the unit’s battery is sitting inside the back compartment, balancing out the headset’s weight. My view is that the the system isn’t as comfortable as Quest, but then, it does have more and better hardware inside.

My feelings on Neo 2’s controllers are mixed. I love the fact that they’re USB-C rechargeable, unlike the annoyingly AA-powered Quest controllers, and come with their own charging cable. Additionally, Pico’s decision to track them with a magnetic system rather than Quest’s IR camera/constellation LED approach may yield benefits for some users and in specific use cases — particularly when the headset’s inside-out tracking system can’t “see” the controllers. On the other hand, the Quest controllers feel a little more comfortable, and Oculus’ finger and hand tracking tricks are two steps ahead of Pico for the time being.

READ  Best business headphones and earphones in 2020: best headset with microphone and more 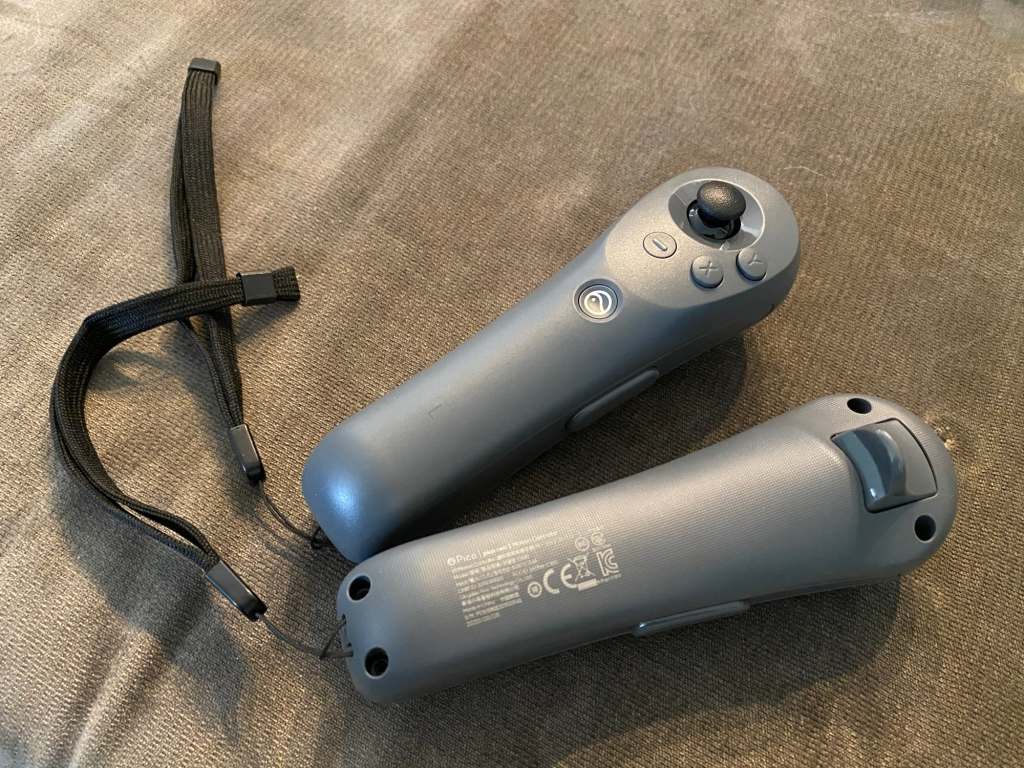 Software is arguably the biggest challenge for Neo 2 users, though as an enterprise headset, that might not be as serious of a deficiency as it would be for a consumer product. My headset arrived with preinstalled VR video viewers and a web browser, some extremely rudimentary games, and an app store to install content, all more conspicuously based on Android (8) than Oculus’ offering. Too many of the demo apps were buggy — one app wouldn’t load past the title screen, another wouldn’t display 360 degree videos, and a third put up very PC-like error codes — but the ones that worked looked nice, and a workout game called OhShape showed how the Neo 2 hardware would make a 3D title like Beat Saber look with more pixels (cleaner, and just as smooth as on Quest).

It would be unfair to expect the brand-new Neo 2 to have a software library as robust as what Quest has built up over the last year, and that may never happen given its business focus. I suspect that Pico users will need to rely more heavily on apps built by doggedly cross-platform developers (such as Firefox Reality) and custom apps from their enterprises than from companies chasing consumer dollars and user bases. 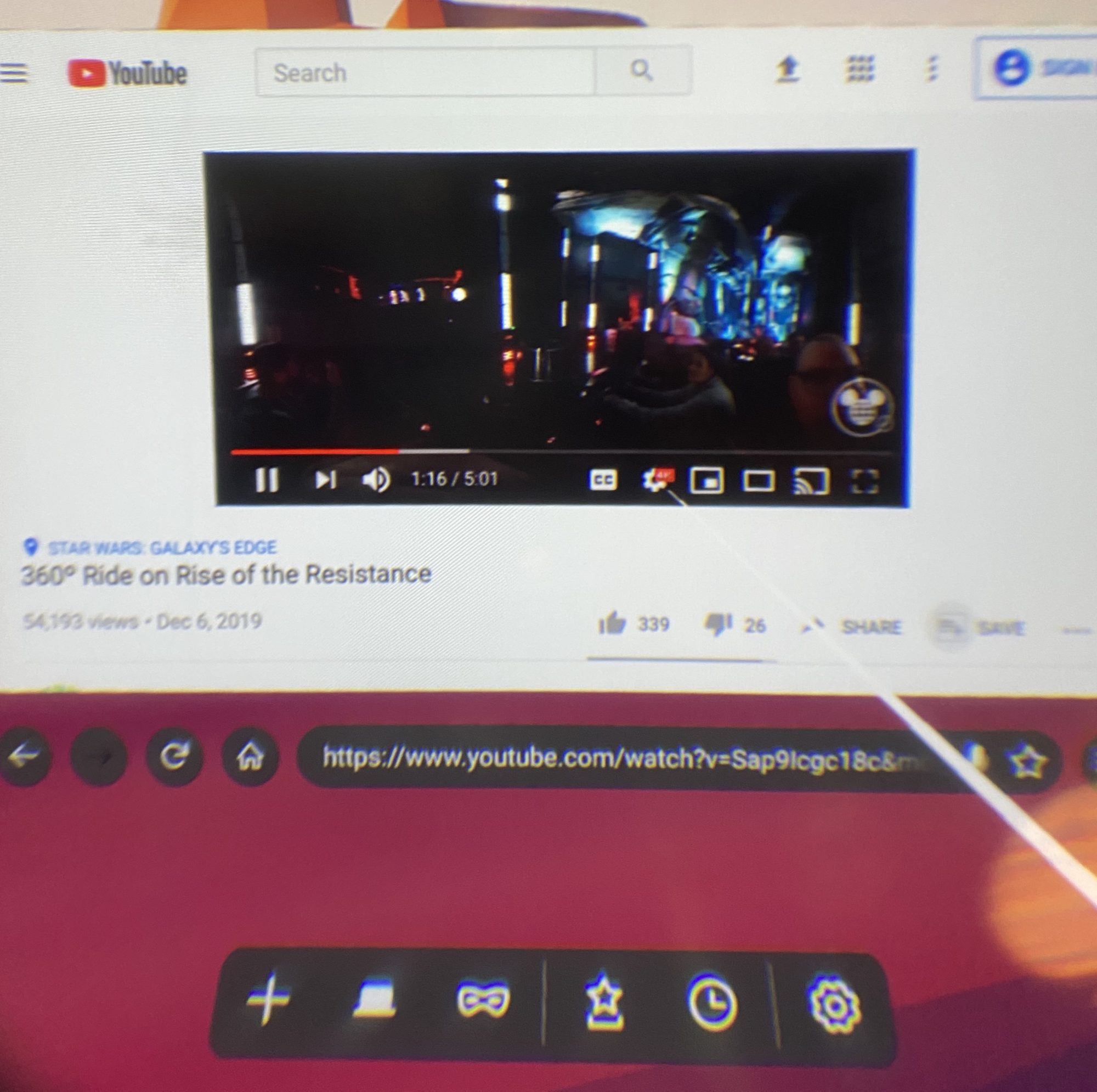 Above: Firefox Reality lets you browse the web through Neo 2, and access 360-degree VR content that can expand to fill both lenses at will.

At this stage, my take on the Pico Neo 2 Eye is somewhat mixed. I’m more impressed than I expected to be by both the hardware and the user interface, both of which are intriguingly close to the Oculus Quest experience. Pico’s 4K displays and eye tracking both have the potential to be major assets over the Quest for users, and the headset’s ability to pivot between standalone and wireless PC modes will prove a fascinating test of enterprise developers’ longer-term ambitions for VR.

Less positively, neither of the Neo 2’s tentpole features comes cheap, and the current state of Pico’s software support only hints at their eventual value — absent compelling demos, even enterprises may struggle to justify spending $200 more than a 128GB Quest just for the 4K displays, to say nothing of another $200 for the eye-tracking. Add to that the headset’s aforementioned ergonomic considerations and there’s no easy winner here.

Pico’s Neo 2 headsets currently provide a compelling glimpse at the future of standalone and wirelessly tethered VR, building on the foundation Oculus laid last year with Quest. Only time will tell whether developers and enterprises create Neo 2- and Neo 2 Eye-specific software that truly justifies the platform’s added expense. If you’re interested in checking one or both of them out, they’re now available worldwide, with further details at Pico’s website.

Oculus’ John Carmack Got ‘Minecraft’ Working on Quest, But the Project Was Abandoned

‘Until You Fall’ Arriving on PSVR & Oculus Quest in Fall 2020