The Royal Meteorological Society has announced the winners of its annual weather photography competition.

Rudolf Sulgan of New York was named the UK association’s Weather Photographer of the Year for his image, ‘Blizzard,’ depicting pedestrians braving blistering winds and snow on the Brooklyn Bridge.

Sulgan said the toughest part of getting the shot, aside from the chilling temperature, was the frequent changes in available light.

‘The light that the sun gave, refracting in blocks of ice, caught my attention and made me take this picture,’ Trofimov said.

Another Russian, Kolesnik Stephanie Sergeevna, was named Young Weather Photographer of the Year, with ‘Frozen Life,’ which Sergeevna describes as ‘part of sunny summer frozen in ice.’

The fifth annual contest, hosted by the society in association with AccuWeather, drew more than 7,700 submissions from over 2,600 photographers around the globe. 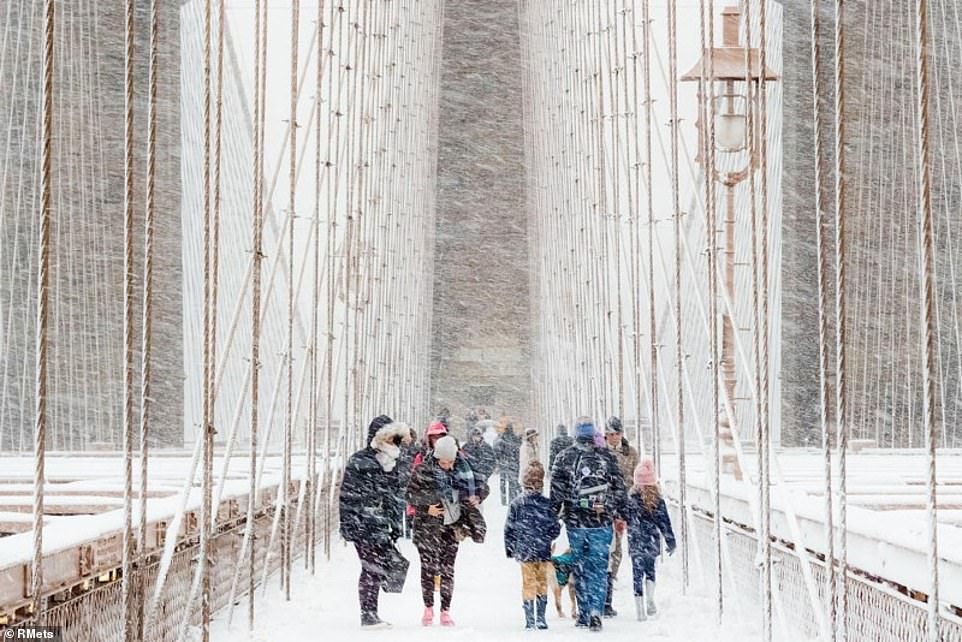 Rudolf Sulgan of New York was named the UK association’s Weather Photographer of the Year for his image, ‘Blizzard,’ depicting pedestrians braving blistering winds and snow on the Brooklyn Bridge

Their works depicted weather in all its awesomeness, beauty and terror – from a rainbow shining over a pony in Swansea, Wales, to a tornado tearing through rural Colorado.

From them, 26 finalists were announced in August, with the winner and runner-ups in each category announced at a virtual event on October 17.

‘Weather is consistently on people’s minds because it impacts so much of our daily lives,’ the organization said. ‘It also lends itself fantastically to photography.’

Sulgan’s winning photograph will appear in the society’s annual calendar. 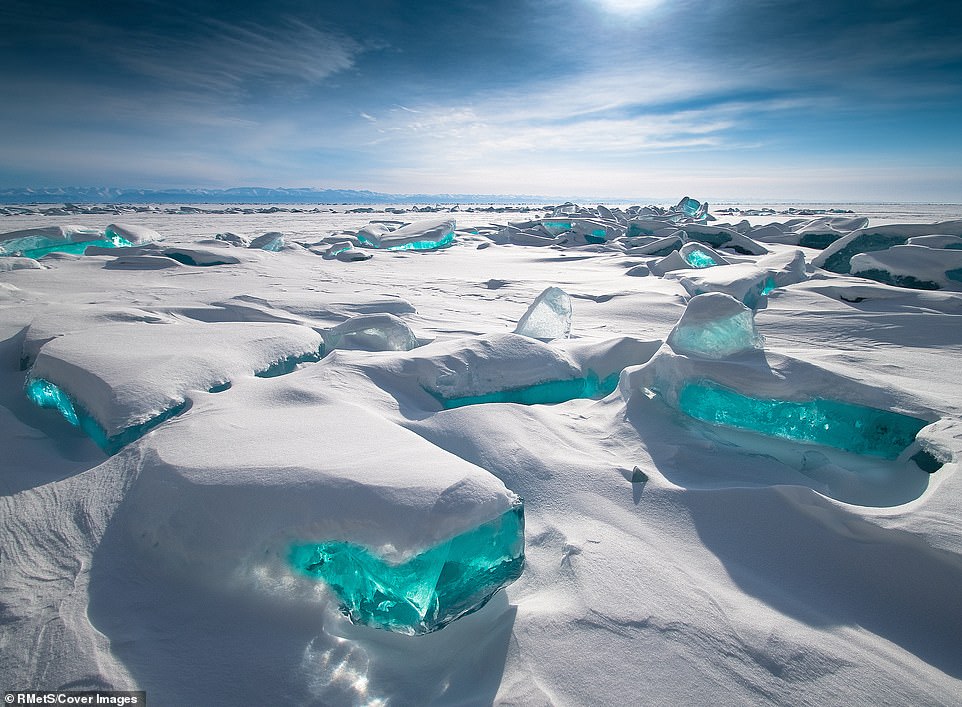 Alexey Trofimov was voted Public Favorite for this shot of the turquoise ice of Siberia’s Lake Baikal as it glistened underneath a blanket of snow. ‘The light that the sun gave, refracting in blocks of ice, caught my attention and made me take this picture,’ Trofimov said 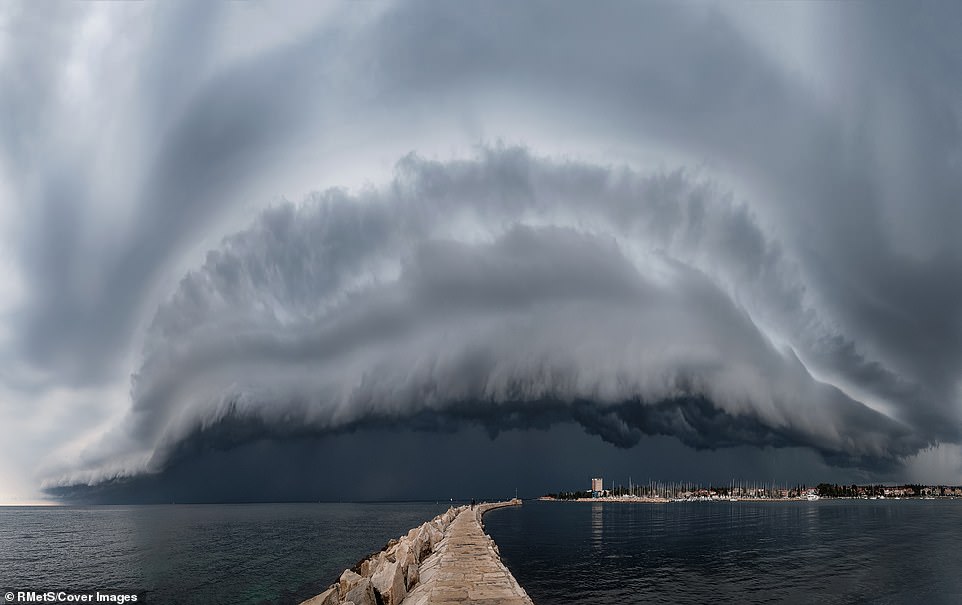 ‘I was waiting for two hours for the cloud to arrive and then it made a real mess’, said Second runner-up Maja Kraljik of the shelf cloud she shot over the harbor in Umag, Croatia

He said he chose his submission to draw attention to global warming, which will make millions of people living on the coasts increasingly vulnerable to flooding.

‘I made this image in 2018 during a strong blizzard, as El Nino’s periodic warming of water often disrupts normal weather patterns,’ he wrote. ‘My main concern and inspiration is that my images hopefully do a small part in combating climate change.’

According to the National Weather Service, a blizzard is a storm with wind speeds greater than 35mph and enough snow to reduce visibility below a quarter mile for at least three hours. 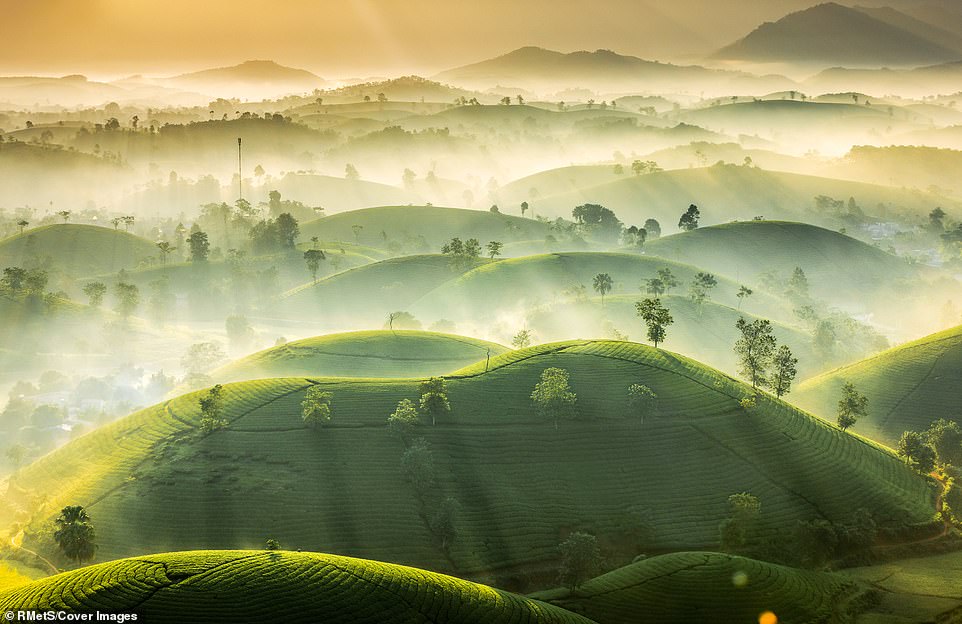 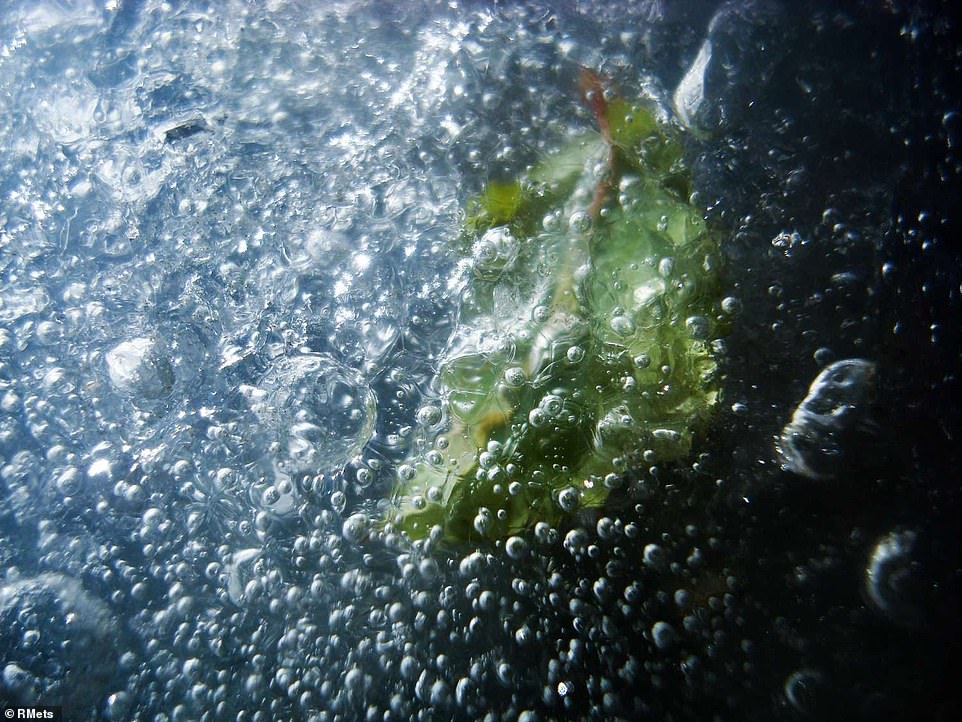 Young Weather Photographer of the Year Kolesnik Stephanie Sergeevna says time seeming to have stopped for this leaf, photographed in Shakhty, Russia 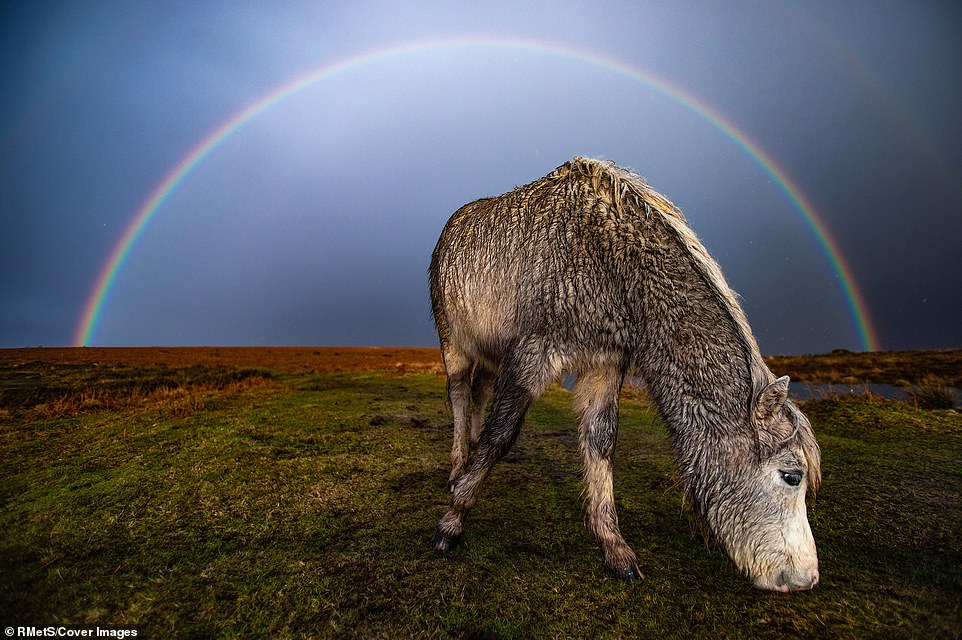 ‘In the wake of storm Jorge and after a thunderous hailstorm, a full beautiful rainbow appeared behind the semi-feral ponies of Cefn Bryn Common,’ said photographer Joann Randles of his pastoral shot in Swansea, Wales

Snow doesn’t even have to be falling: Strong winds can pick up flakes that have already fallen and create a ‘ground blizzard.’

Vu Trung Huan of Vietnam was first runner up in the main category with a sunrise photo of the otherworldly fog-covered tea hills of Phú Thọ.

‘When the sun is up, everything is tinged with sunlight, on the tea buds there is still glittering morning dew,’ Huan wrote, ‘a pure beauty that makes you just want to embrace everything. ‘

‘I was waiting for two hours for the cloud to arrive and then it made a real mess,’ Kraljik said. 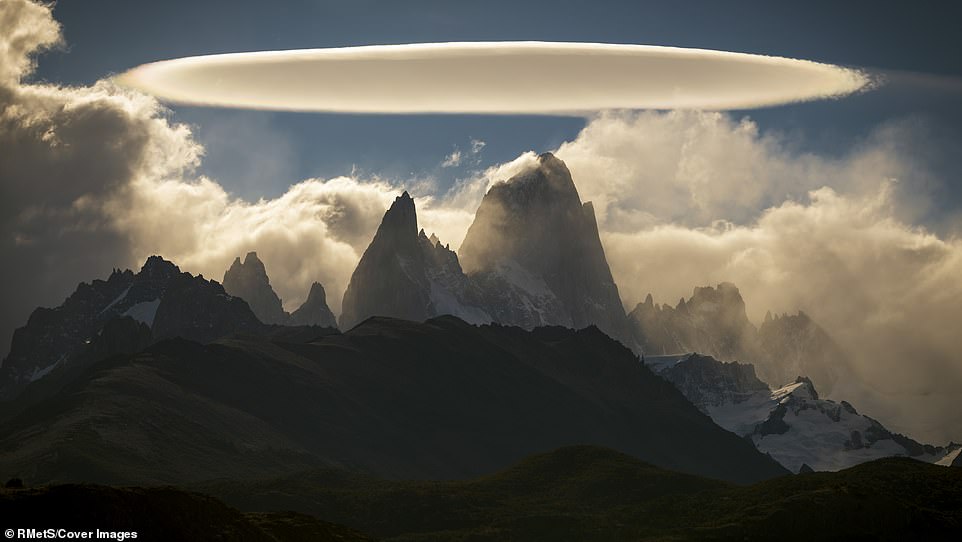 This photograph of clouds above El Chalten, a small mountain village in Argentina, was taken by Francisco Javier Negroni Rodriguez. ‘Only for a moment the clouds allowed me to see El Chalten and to my surprise there was a spectacular and brilliant lenticular cloud with a beautiful and perfect figure that I had never seen,’ Negroni said

Coming in second in the Young Weather Photographer category was Emma Rose Karsten, with ‘Surf’s Up,’ depicting a ‘huge awesome cloud’ in the parking lot of Wildwood, Missouri, high school.

Founded 170 years ago, the Royal Meteorological Society (RMetS) works ‘to strengthen the science and raise awareness of the importance of weather and climate, support meteorological professionals and inspire enthusiasts.’ 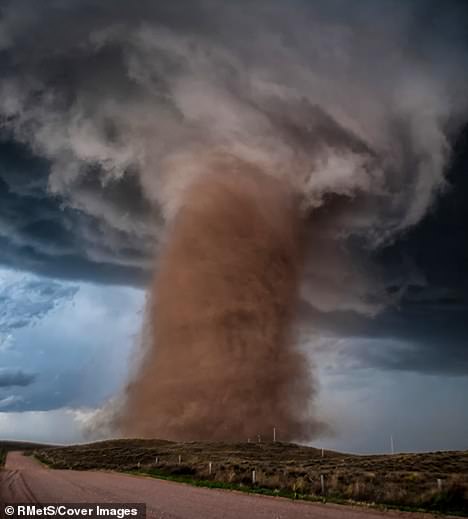 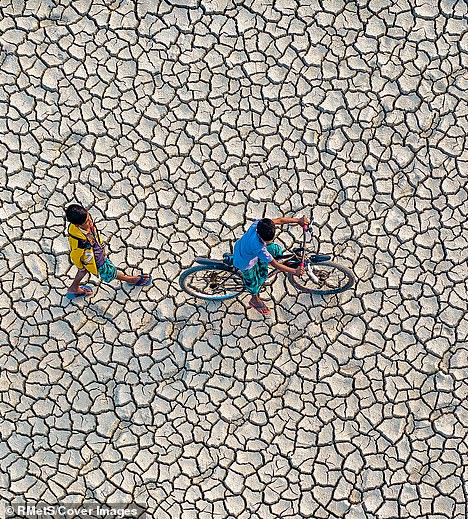 The submissions showed the extremes of weather phenomenon. At left, Tori Jane Ostberg shot a class two tornado tearing through a rural Colorado field. At right, Abdul Momin used a drone to capture a drought-ravaged field in Chittagong, Bangladesh 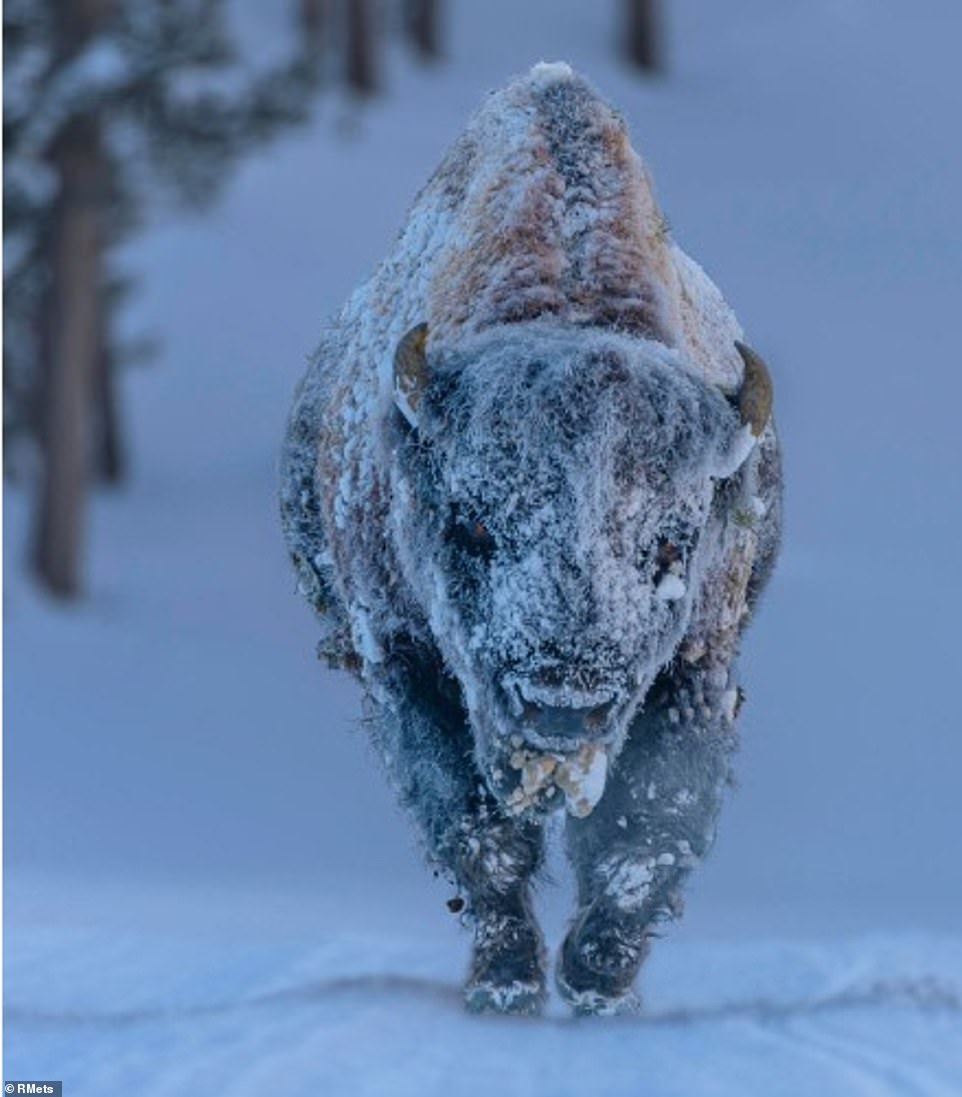 Photographer Lauren Hedien took to Yellowstone National Park in January to capture this image of a snow-covered bison at sunrise. ‘It was near zero degrees Fahrenheit,’ Hedien recalls. ‘We came around the corner in our snow coach and saw this magnificent bison just sauntering down the road as if they owned the park- and they do! ‘ 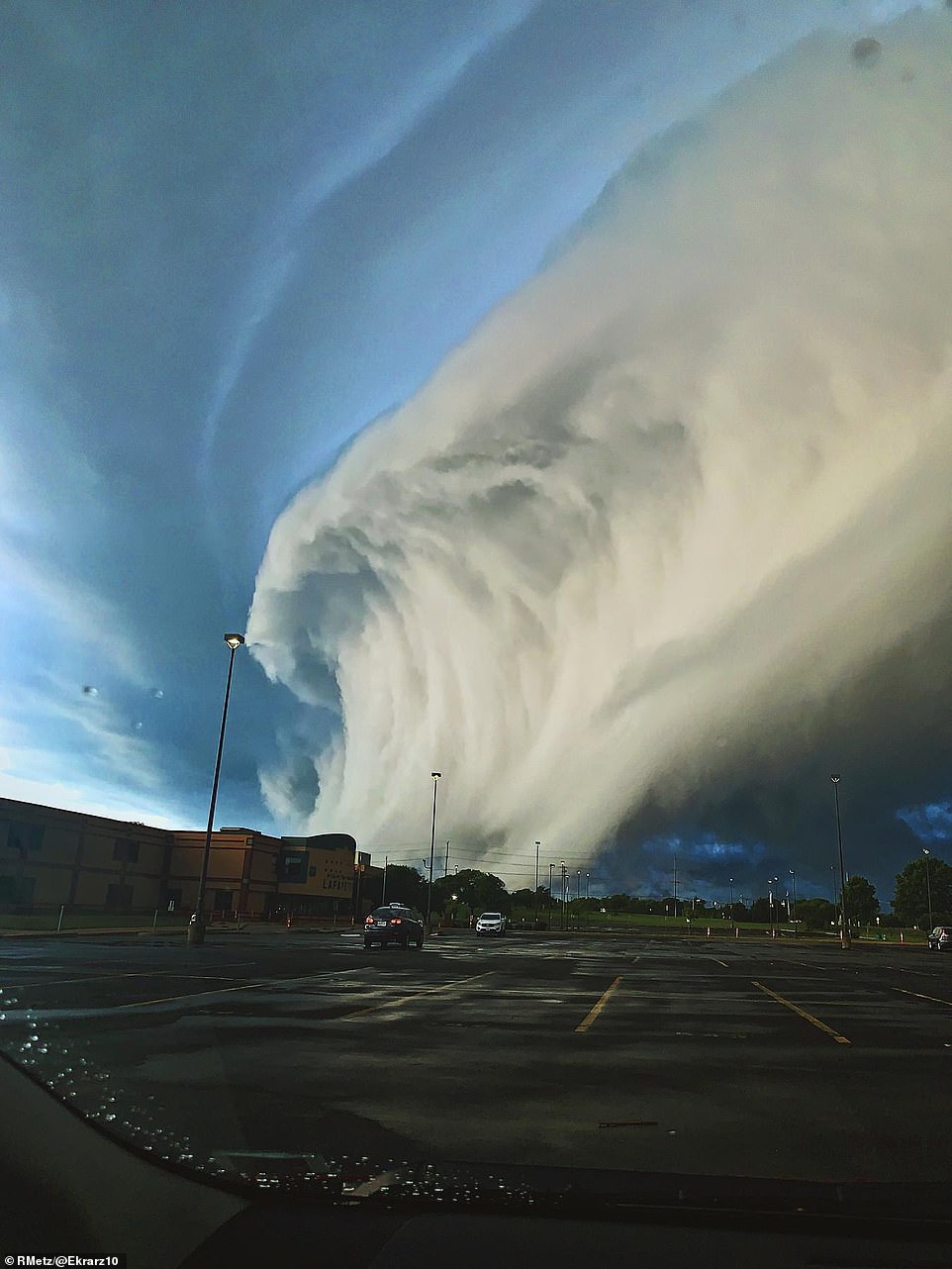 Coming in second in the Young Weather Photographer category was Emma Rose Karsten, with ‘Surf’s Up,’ depicting a ‘huge awesome cloud’ in the parking lot of her Wildwood, Missouri, high school 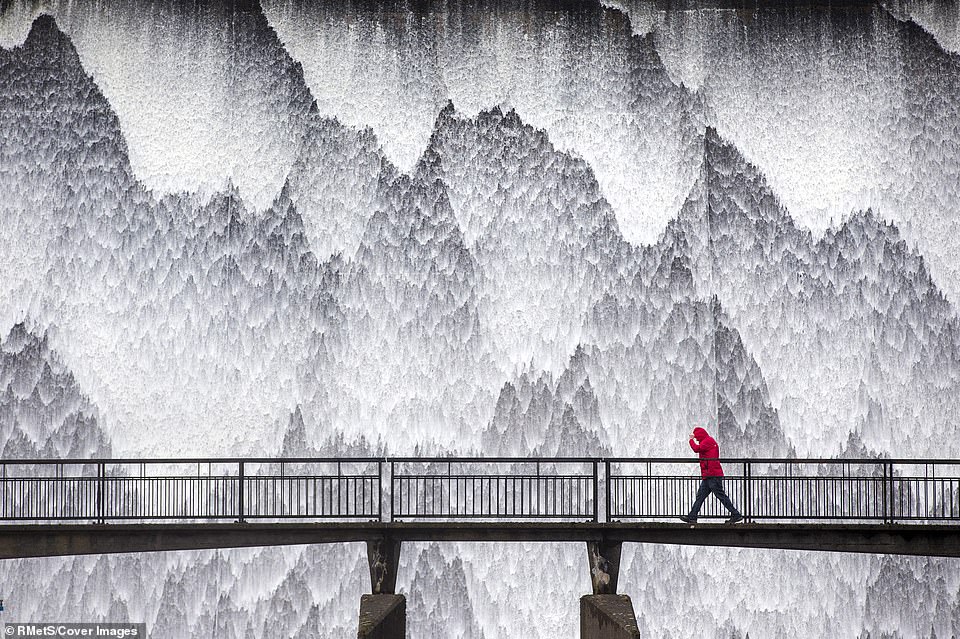 In Andrew McCaren’s ‘Wet Damn’ a visitor in a bright red coat contrasts dramatically with sheets of water cascading down the walls of Wet Sleddale Dam in Cumbria, England

Microsoft's new analytics tools help you keep track of all your...

She was a homeless teen mom. Now, this Brockton woman is...