Everything has its baseline for greatness. In golf, it’s Tiger Woods. In tennis, Roger Federer. In basketball, Michael Jordan.

The 21st century has seen a resurgence in supercars with new entries like the McLaren 570 and Audi R8 joining mainstays Ferrari and Lamborghini. Yet the 911 has maintained the German brand’s claim to handling pre-eminence. The last-generation track-focused 911 GT2 RS destroyed Car and Driver’s Lightning Lap record at Virginia International Raceway held by the mid-engine carbon-fiber $500,000 Ford GT supercar. By five seconds. 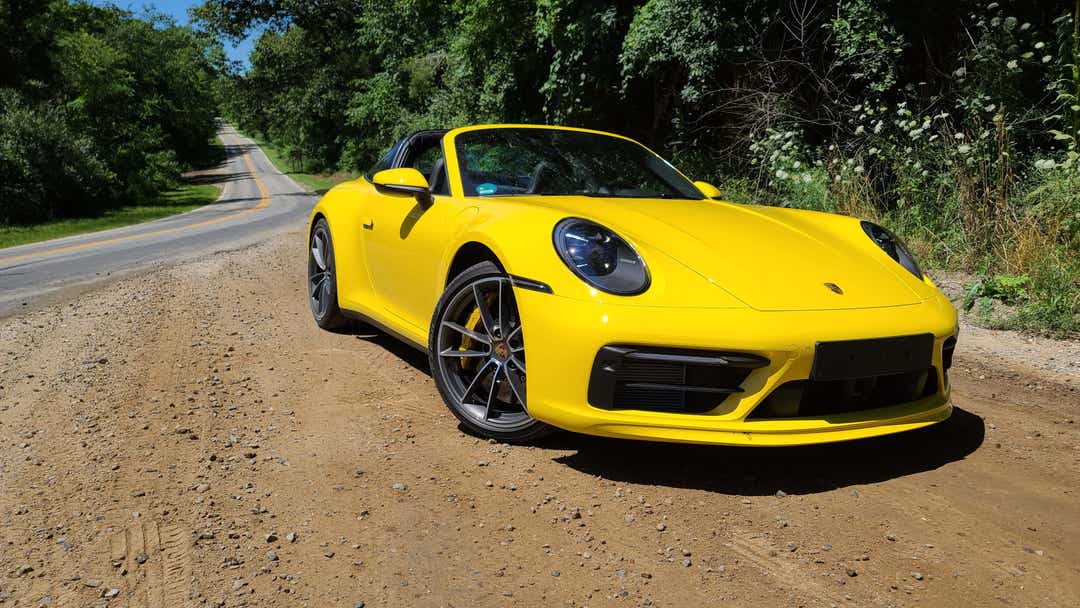 Every brand baselines its sports cars to the 911 on track and off. The eighth-generation 2020 model is no different. Though I must admit, I had my doubts.

When Porsche introduced the latest 911 — factory code 992 for you Porschephiles — at the 2018 Los Angeles Auto Show, it aimed to swath the world’s greatest athlete in luxury. Digital electronics have transformed autodom and Porsche didn’t want to be left behind. The LA intro was just as lavish. LA celebrities as sleek as the 911’s classic Coke-bottle shape walked the outdoor runway with Porsche’s star. A light show lit up the night

Conversation strayed to Porsche’s electric sedan, the Taycan, into which the company had poured millions. Taking it all in, I worried the 911 might go soft. Like a Hollywood legend who forgot what made them a legend.

After a day going to Hell (Michigan) and back in the convertible, Targa 4S — a new trim for the 2021 model year — I’m happy to report the champ is still at the top of its game. 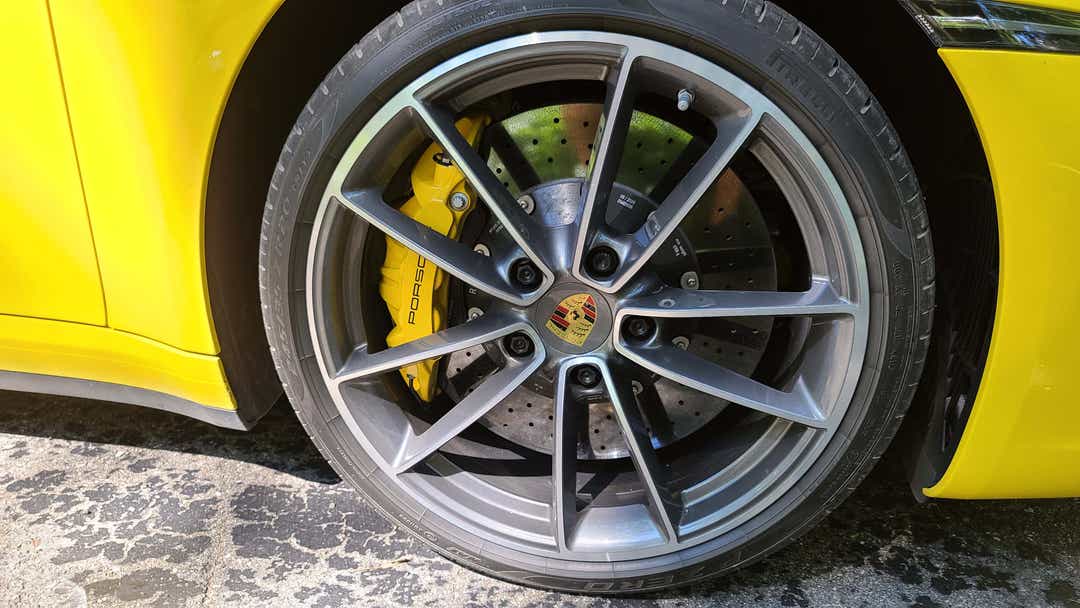 I felt the 911 difference almost immediately. I had stepped out of Corvette’s all-new C8 the day before — hands down the best-handling Corvette ever made — with full coil-over springs, widened track and instant traction. Yet, it doesn’t instill the same confidence as the 911.

The Porsche goes exactly where you point it. Pushing the Corvette (or most sports cars) over the undulating hills of M-32 in Antrim County, I had to work the steering wheel at the limit to keep the beast on its chain. Across similarly challenging curves on Hell’s Hadley Road, the Porsche feels like it’s on rails. It’s like a slot car begging for more juice.

It wasn’t always so. The 911’s aft-of-axle rear-engine layout — compared to Corvette/Ferrari/McLaren mid-engine weapons — is inherently unbalanced. It took decades for Stuttgart engineers to tease out the gremlins of oversteer. An arsenal of modern technology helped. My Targa 4S tester benefited from innovations like electronic limited-slip differential, rear-axle steering and engineering witchcraft like “PASM” and “PDCC” that would take pages to explain.

All the driver needs to know is it makes handling magic. 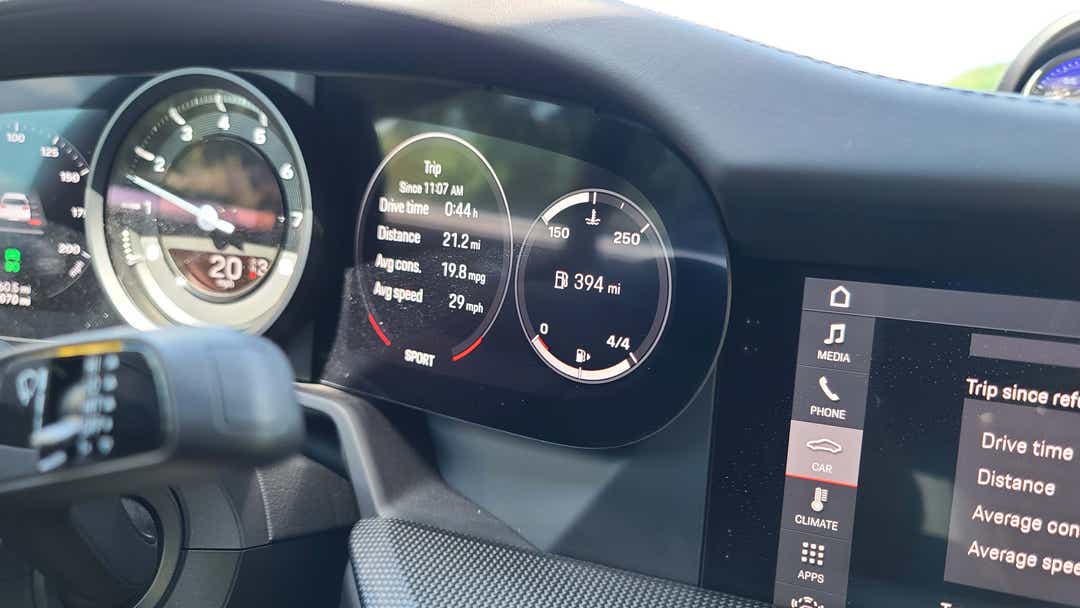 When I drove my Tesla Model 3 Performance — a nice-handling sports sedan — afterward, it felt like a wet noodle by comparison. The only car that rivals the 911 is another Porsche: the smaller Cayman/Boxster and its inherently balanced mid-engine layout.

But when it comes to the new 911’s biggest change — the interior — Porsche still has work to do. Especially when compared to the Corvette C8, which has vaulted itself to best cockpit in class. A reminder: the C8 is also the cheapest supercar in class, starting at a bargain $59,995.

My Racing Yellow Porsche tester starts at $136,550 but with options ballooned over $180,000. For this you get a roomy cabin with plenty of head clearance for this 6-foot-5 giraffe. Unlike its mid-engine competition, 911 has rear seats (though they are more hospitable to golf bags than people). Together with a carry-on luggage storage in the frunk, it’s a sports car fit for weekend trips. 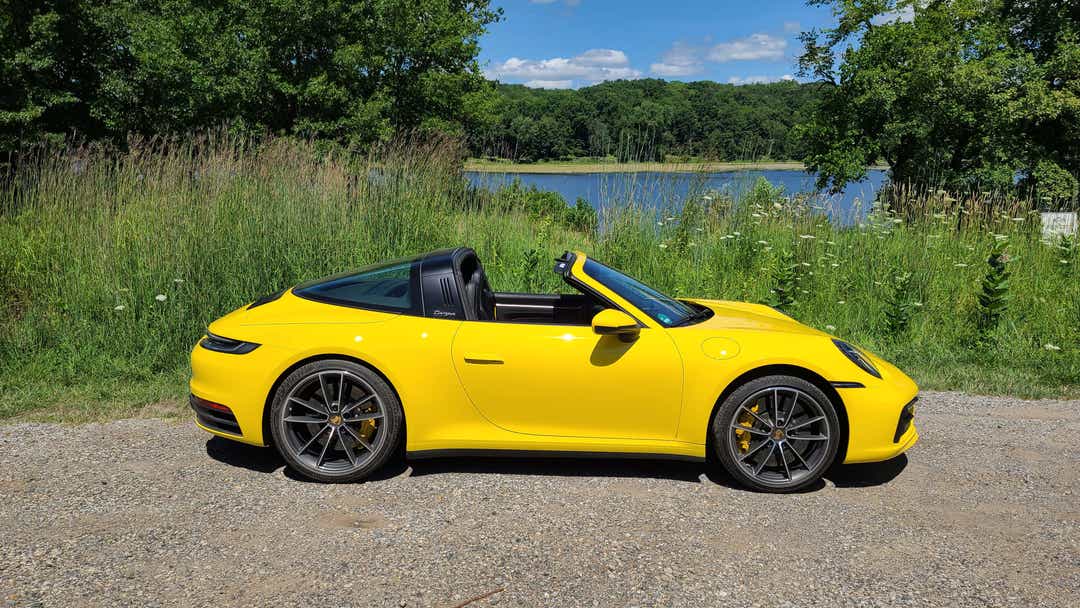 The console is much improved over the previous generation with room for a cupholder (Imagine! Previous models had a flimsy pop-out from the glove compartment.). Theres’s adaptive cruise-control and a touchscreen complete with modern amenities like 4G Wi-Fi and Apple CarPlay. It’s a layout shared with the more-luxurious Panamera sedan and Cayenne SUV — even improving on those siblings with a small, ice cube-sized auto shifter that doesn’t obstruct climate buttons.

But other details lag compared to the ’Vette.

Porsche doesn’t offer Android Auto, and voice recognition is average. The 911 has upgraded its signature five-dial instrument display with state-of-the-art digital readouts — but the round steering wheel obscures some information. Corvette’s race-car like square steering wheel, by contrast, allows better visibility of its broad digital dash. The C8’s retractable hardtop can be stowed while moving at speeds up to 30 mph. Want to store the Targa roof? You’ll have to pull to the side of the road.

Classic touches like Porsche’s left-side key remain, but overall the cabin lacks the personality of rivals. 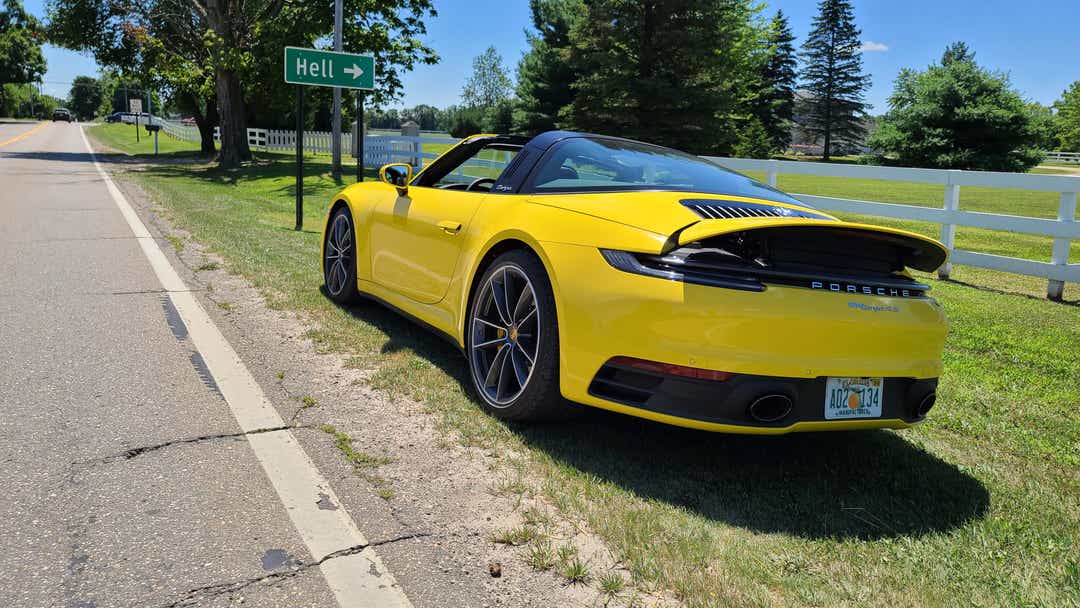 Leave the personality to the drivetrain.

Despite adding twin turbochargers, the flat-six engine makes beautiful music. The symphony’s exhaust notes get more aggressive as you cycle through the Sport and Sport Plus drive modes. Unlike the Boxster/Cayman which downgraded to a turbo-4, the 911’s six-holer screams for more right foot at high revs, just like the ’Vette’s V8. Advocates for a silent, electric future should drive these beasts first.

Mated to a lightning-quick dual-clutch 8-speed PDK automatic transmission, the 443-horsepower mill exhibits no turbo lag. None. Not on corner exits. Not on launch-control starts that snap your neck on the way to 60 mph in 3.4 seconds.

The Targa is available with a 7-speed manual for purists, but the PDK is superior and comes with paddle shifters for when you want to be in control. 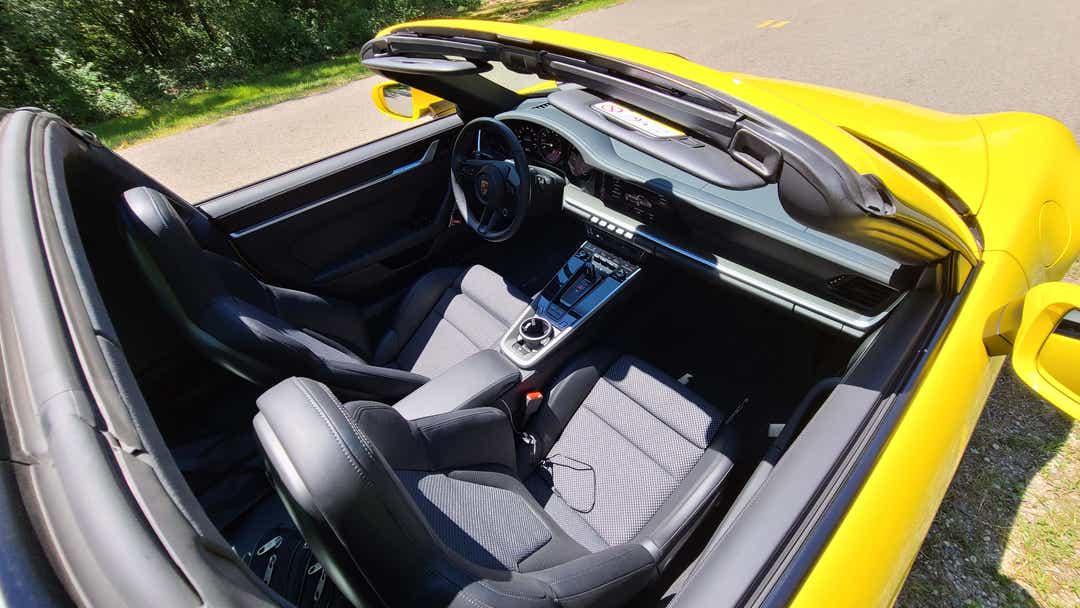 For all the emphasis on interior-tech refinement, the 2021 reserves its most clever electronic trick for acceleration. “Sport response” plants a button in the middle of the steering wheel. Luffing behind traffic, I pushed the button. Instantly, the gearbox downshifted from 6th to 3rd, the flat-6 screaming whilst the tach quivered at 6,000 rpms.

Nail the throttle. Gulp traffic in the blink of an eye. Exhale. Wow.

Luxury upgrades exact their toll on weight, and the added tech and Targa roof meant my 4S weighed in at an estimated 3,700 pounds. The gym-toned athlete shrugged it off. As I wrung the 911’s neck through Livingston County curves and cloverleafs, it felt much smaller.

It’s what makes 911 the Tiger Woods of sports cars. But the competition is nipping at its heels. 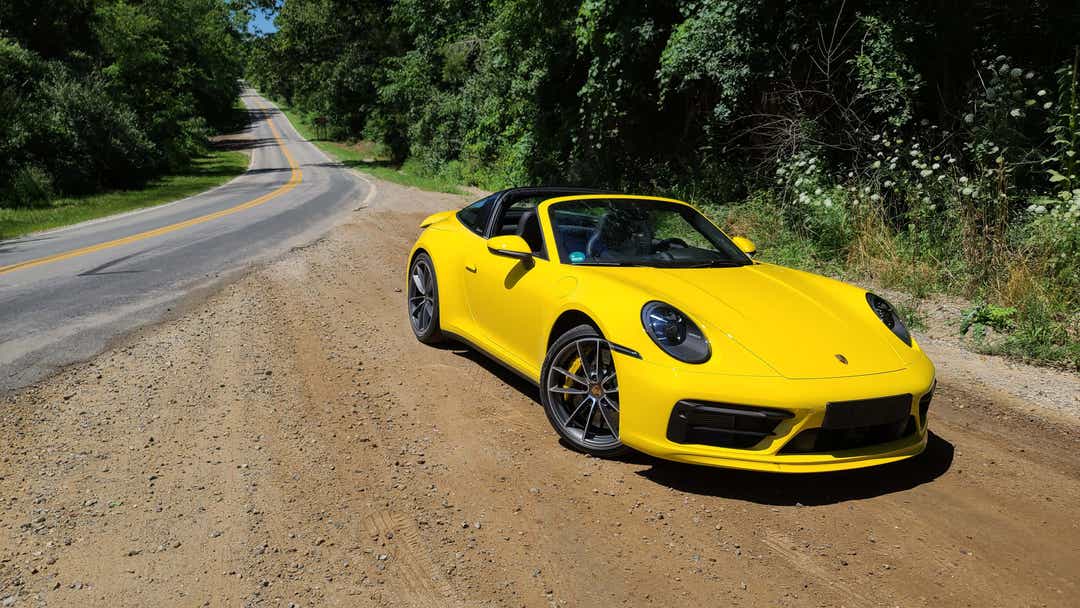 Henry Payne is auto critic for The Detroit News. Find him at hpayne@detroitnews.com or Twitter @HenryEPayne.