PHOENIX — Sunbathers understand the benefits of applying sunscreen, but in America’s hottest big city the same concept is being tested at street level in the hope of bringing some lasting relief from the relentless Arizona sun.

A team from Arizona State University is working with the city of Phoenix on a pilot program studying the use of “cool pavement” to reduce heat island effect, a phenomenon that raises temperatures in urban areas covered by asphalt and concrete.

Heather Murphy, a Street Transportation Department spokesperson, said Phoenix is applying cool pavement coating to nine sites representing different urban characteristics, from shaded streets to open lots. The applications are expected to be completed by the end of the month.

“What sunscreen does is prevent the sun from damaging the surface,” Murphy said. “The same sort of effect is what we want to achieve with cool pavement.”

The Environmental Protection Agency says normal paving materials can reach temperatures of 120 to 150 degrees Fahrenheit during peak summer and transfer excess heat into the air. Lowering the surface temperature can provide comfort and reduced energy costs to residents sheltering from extreme heat like the record levels reached this year in Arizona, California, New Mexico and Texas.

Phoenix set a U.S. record Oct. 14 for 144 days of temperatures over 100 degrees, the most in a calendar year. The previous record of 143 days was in 1989. The city in the Sonoran Desert also set records this year for 50 days of 110 degrees or more and the hottest August since temperature tracking began in 1896.

Heat island effect is a “major factor” in both day and nighttime temperatures and a potential health hazard, Arizona State Climatologist Nancy Selover said, noting the particular risk to those who cannot afford air conditioning and homeless residents sleeping outside.

“When we stay hot at night — we had 29 mornings that had a temperature of 90 or higher at sunrise this year — the day just gets hotter from there,” Selover said in an email. “So the maximum is likely to be a few degrees warmer than it would be if the night had cooled.”

Ronnen Levinson, who leads the Lawrence Berkeley National Laboratory’s Heat Island Group at the University of California, Berkeley, said cool pavement can simultaneously address some of the most important issues facing the hottest cities in the U.S. and a world experiencing alarming climate change.

“Cool pavements have potential to mitigate the urban heat island, to save energy in buildings if they lower the outside air temperature, reducing the demand for air conditioning in the building, and they can slow global warming by reflecting more sunlight back to space,” Levinson said.

There are two basic categories of cool pavement, Levinson said. Reflective cool pavement has a lighter color and chemical properties that turn sunlight back toward the atmosphere rather than absorbing heat like dark asphalt. Evaporative pavement relies on rainwater seeping into its porous surface and then cooling the pavement and the air during slow evaporation. The choice of which technology to use is based on whether a city gets rain during its hottest months or is in a dry climate.

“The (cool pavement) surface temperature is 129 Fahrenheit,” Sailor said. “But the asphalt next to it was at least in the 150s.”

Reducing surface temperature can have direct benefits by lowering air temperature, which Sailor said has “significant implications for heat-related illness, air quality, water use, and energy use.”

“It is estimated that a 1 degree Fahrenheit reduction in air temperatures in Phoenix can result in a 1.5% to 3% reduction in residential use of potable water,” Sailor said. 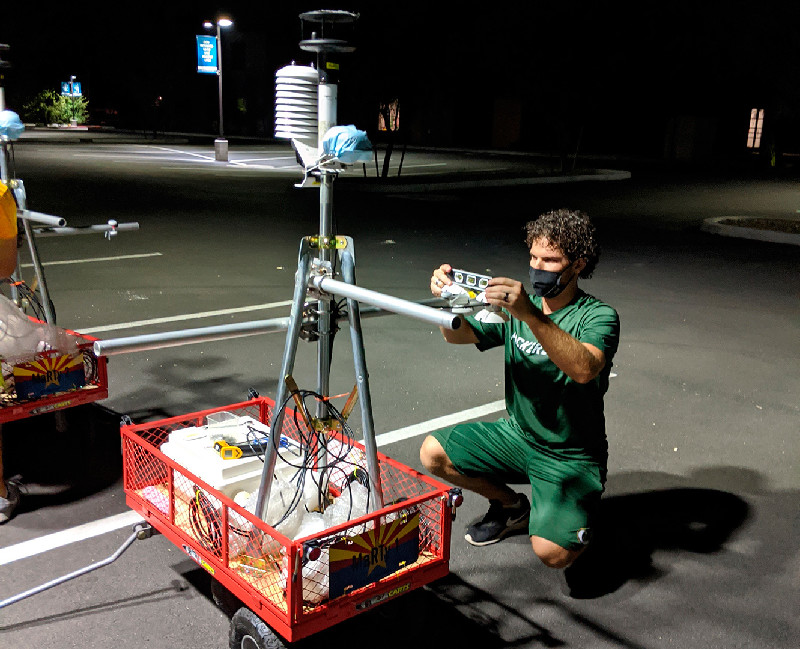 In addition to helicopter images, Sailor said the researchers use cars taking air and infrared readings, sensors planted in the pavement and a custom cart measuring mean radiant temperature as it rolls along sidewalks and streets.

The Phoenix research team will take readings over time to determine how the cool pavement responds to city life, Sailor said.

“As they wear as people do donuts in intersections and leave skid marks and dirt the reflective properties change for the worse over time,” Sailor said.

Cool pavement coatings are typically made of polymers, the binding chemicals also used in house paint, and more energy and carbon is required to manufacture polymers than normal asphalt coatings, Levinson said.

Phoenix uses CoolSeal, which California-based GuardTop LLC said on its website is not a polymer, but rather a water-based, asphalt-emulsion the company claims can reduce surface temperatures by 10 to 30 degrees Fahrenheit.

Reflective cool pavement also does not guarantee comfort in the immediate surroundings. The surface bounces the sun’s heat upward into the atmosphere, but also sideways toward buildings and pedestrians, Levinson said.

Sailor noted cool pavement was used on a marathon route for the 2020 summer Olympics in Japan, which was postponed because of the coronavirus pandemic, but the solar reflection likely would have made runners feel hotter even with a lower surface temperature.

Despite higher costs than ordinary asphalt, Sailor estimated cool pavement can result in notable savings in Maricopa County, where Phoenix is located.

“A single degree Fahrenheit reduction in air temperature during the summer could save residential ratepayers something like $75 million per year in avoided air conditioning costs,” Sailor said.

The nine areas chosen were already due for resurfacing and the money would have gone toward rehabilitating those areas regardless of the material used, she said.

'Disastrous' or a smart move? How Victoria's case for an electric car usage tax stacks up – The Guardian

How sunshine can make the railways greener

Jake DeBrusk plans to give Bruins more bang for the buck...