Lisa Longoria found out live via Zoom that she had been named the state’s top middle school principal this year. Born and raised in Ontario, Longoria said she’s honored to receive the award. 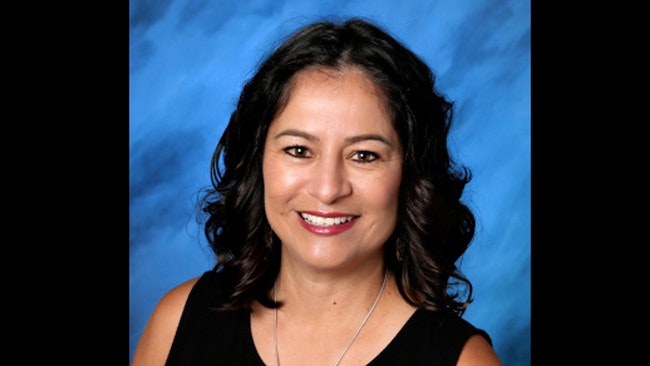 Lisa Longoria began her administrative career as an associate principal at Ontario Middle School in 2012 and became principal the following year. (Submitted photo)

NOTE: The Enterprise is providing free access to its content related to the coronavirus as a community service. Subscriptions at $5 a month help the Enterprise keep this up.

ONTARIO – One of Lisa Longoria’s uncles retired as a custodian from the Ontario School District. Another uncle was a groundskeeper.

Longoria too is a district employee, but reached executive ranks as principal of Ontario Middle School and now has hit a professional highlight.

She has been named Oregon’s 2020 middle school principal of the year.

In a sign of the times, she learned of the honor via Zoom, a video conferencing tool. An emotional Longoria repeatedly thanks her colleagues for the award, conferred by the Confederation of Oregon School Administrators.

“We’ve really built a team. We’re all working together. Our teachers collaborate really well together,” she said in an interview.

When she became principal in 2013, the letter stated, the school had a reputation for bad student behavior and poor grades.

The school “was on the verge of entering into improvement status, scores were low and stagnant,” the nominating letter reads, adding it “had a reputation in the community as a place where students behaved poorly.”

She’s a firm believer in the classroom management program known as conscious discipline. More than a program, she said, it’s a lifestyle.

The technique, she explained, calls on educators “to look at ourselves and realize how we’re going to respond to those behaviors rather than react.”

“The way we respond is to reach out to kids and ask what’s going on? How can I help you? Are you OK?” Longoria said.

She’s acutely aware of the challenges her students face. As if middle school – the period of raging hormones – weren’t hard enough, many of her students are impoverished.

But during her tenure, the school has posted gains in test scores. Last year’s test scores in math surpassed the state average and outpaced most area schools.

Perhaps most significant, the test scores have been consistently improving.

Longoria is unafraid of unpopular decisions, especially if they translate to student success. Two years ago she changed the school’s schedule halfway through the year.

“The bottom line is we have to make those tough decisions,” Longoria said. “If we can make it and it’s not popular but we know we’re going to be able to support the team every step of the way, we’re going to do it.”

She got her start as an educator in Idaho, after getting her teaching degree from Boise State University.

Born and raised in Ontario, she returned to contribute to her community as a fourth grade teacher at Alameda Elementary. She became vice principal at the middle school in 2012.

She said building relationships with her students has come naturally to her.

About two-thirds of Ontario Middle School students are Latino. Raised in a bilingual, bicultural household, Longoria said she’s walked in her students’ shoes.

“Research says, and I know first hand, that building relationships with your students is a way to help them be successful,” she said. “When you build those genuine relationships, they know you care.”

She’s actively involved in the Oregon Association of Latino Administrators. Growing up, she had people to look up to, but she said she didn’t see women of color at the administrative level.

“I think it’s important for kids to see people that look like them serving them in professional roles,” Longoria said, reflecting on her own background.

“To be able to serve in the capacity of principal and then to receive an honor like this is amazing,” she said. “And it goes back to the work ethic that I was taught from my family.”

HELP THE COMMUNITY GET THE FACTS….

As long as we can, the Malheur Enterprise will provide free access to all stories related to COVID-19. With businesses closed and not advertising, community support for this service is vital. Help one of two ways:

DONATE – to our LOCAL NEWS FUND. Tax deductible, and anonymous if you wish.

Hewlett Packard Enterprise Wins $160M+ Contract to Power One of the World's Fastest Supercomputers Based in Finland to Bolster Europe's Research in Science and...

Is the Surface Laptop Go a better choice than the XPS...