Facebook’s standalone VR headset Oculus Quest has enjoyed strong sales since its debut last year, and continued to add both new features and refinements at a surprisingly steady pace. That’s continuing this month with a new Quest “system experience” that consists of several quality of life user interface tweaks, one of which is decidedly bigger than the others.

Previously, the Quest UI focused your attention primarily on a single window, but going forward, it will support multiple windows at once — a feature that’s debuting in Oculus Browser, so users will be able to look at a video in one window while reading or doing something else in other windows. Facebook says that multi-window support will come to Chats and the Store later on, among other 2D apps; it’s not likely to be supported for 3D apps due to their higher processing demands.

The Quest is also getting a redesigned universal menu, streamlining the one that has been seen as the device’s home screen into a more compact and icon-driven UI. In addition to a cleaner display of battery power, wireless status, and the current time, some previously buried settings such as volume and brightness are being made easier to find, while commonly used apps will get the same priority treatment. 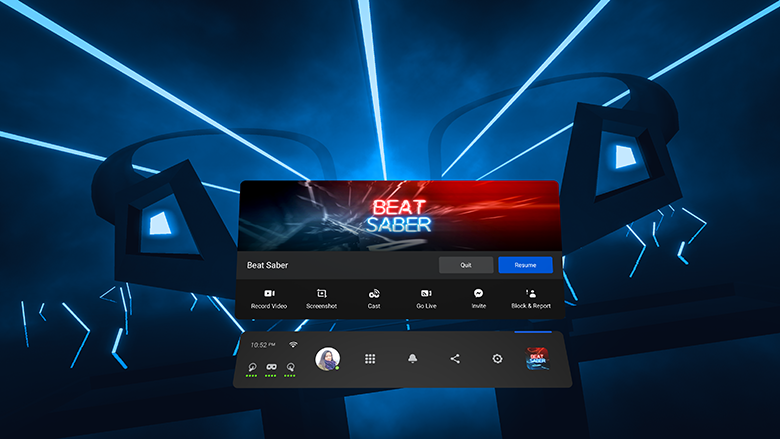 Apps will also be able to surface the universal menu without the need to return to the home screen, along with additional controls that are valuable to individual titles, such as recording videos and photos, sharing content, and connecting to other users for multiplayer experiences. This will be part of a new “immersive overlays” feature that will require app-by-app support, beginning with WebXR apps launched from the Oculus Browser.

One hitch: These improvements are launching as Experimental Features, so they’ll need to be toggled on manually rather than appearing by default when you update your Quest. And of course, thanks to Oculus’s staggered system update methodology, you may be waiting a while before the new release appears on your device. Facebook is promising the launch for “later this month,” so keep your Quest plugged in and in standby mode if you’re interested in trying the new features.