O2 is suffering from an outage that is leaving thousands of customers unable to make phone calls.

According to Down Detector, the issues started at around 12:09 BST, and are affecting O2 customers from across the country.

O2 said it is investigating the source of the outage in response to frustrated customers on Twitter.

‘We’re aware of an issue which might be affecting some customers making and receiving voice calls,’ O2 said in a statement.

‘Our technical teams are investigating. Data and texts are not impacted. Sorry for any inconvenience. Updates will be shared here when they’re available. 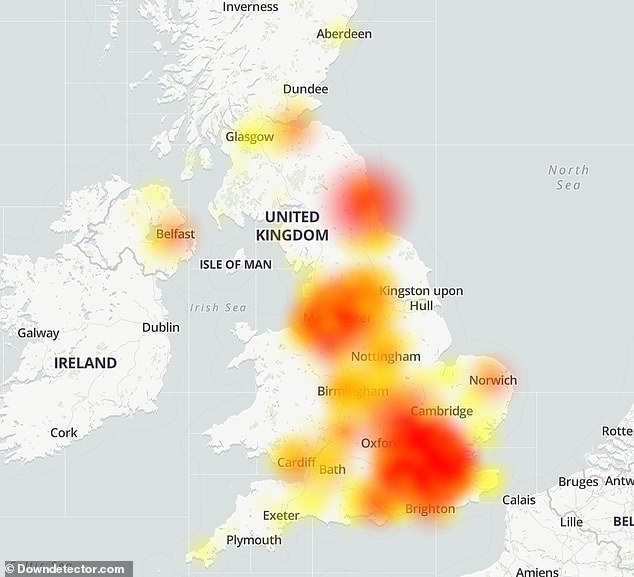 According to Down Detector, the issues started at around 12:09 BST, and are affecting O2 customers from across the country

At 12:35pm on Tuesday, reports of problems with O2 peaked at 5,131, according to Down Detector, which collects status reports from sources including social media and reports submitted to its website.

Customers took to Twitter to vent their frustration at a time when home networks are vital.

@RebeccaW40 tweeted: ‘@O2 network is down yet again. This keep happening and is really not good. During a time like this People need to be able to speak to loved ones. This is becoming a regular thing now. Beyond a joke.’

@natatatlie tweeted: ‘I have job interviews to attend. Lost my job because of coronavirus and can’t get one now because of O2.’

Problems on the O2 network soared at around midday on Tuesday, data from independent outage monitor website Down Detector shows

It was revealed on Monday that O2 is in talks to merge with Virgin Media in a move that could threaten rival telcos including BT and Sky.

Telefonica, O2’s Spanish owner, confirmed it is in discussions with Virgin-owner Liberty Global over a deal between the two network operators.

The Spanish telco giant said it would keep markets informed if a ‘satisfactory agreement’ was reached, according to Reuters.

Make the Case for Security Spending – EdTech Magazine: Focus on...