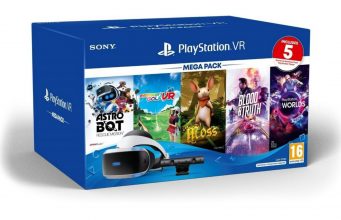 Sony today announced a new PSVR Mega Pack hardware bundle for 2020, launching this month across Europe, Australia, and New Zealand. This year’s pack comes along with five titles, as well as the all-important PS Camera adapter for PS5.

The new pack for 2020 is keeping Astro Bot, Everybody’s Golf VR, and PSVR Worlds, and subbing in two other awesome games: Moss and Blood & Truth.

Inside the pack you’ll find:

Again, notably missing from the Mega Pack is the PS Move controllers, which inexplicably retail anywhere from €60 – €140 when purchased separately. Granted, all of the bundled games listed above include support for DualShock 4, with only Astro Bot not featuring Move support.

Sony says its 2020 VR Mega Pack will be available sometime this month through partner retailers across Europe, Australia, and New Zealand. We haven’t seen regional pricing yet, but we’ll have out eyes on all of the standard retailers, such as MediaMarkt, Saturn, Amazon, and of course the PlayStation Store itself.

The DeanBeat: What Ready Player Two tells us about the metaverse

Beat Saber now has 90Hz support for the Oculus Quest 2

Big Tech's Corrective Politics Is Unsustainable, If Not Devastating – Harvard...