Pitched as the sportiest and most ‘emotional’ of the trio, the new Leon has what appears to be an evolutionary design at first. However, every body panel and exterior component is actually different from its predecessor.

Seat’s head of exterior design, Joaquín García, told Autocar: “The new car is founded on a very strong base: the current Leon. Since then, we’ve had the Ateca, Ibiza and Tarraco, all evolving Seat’s design language further. Now the Leon arrives to culminate that. It has a certain DNA of its predecessors.”

The front end brings forward the look seen on the Tarraco SUV, with revised proportions over the old Leon including a curvier front profile and a more upright windscreen that sits closer to the driver. This was done, García claims, to create more of a “cockpit” feel and reduce the impact on forward visibility of the A-pillars.

The side view features the same three styling lines as the old car, albeit positioned differently, kept because the design “doesn’t need more complexity”. The kink in the window line is also retained.

It’s at the rear where the changes are most visible, however, thanks to a more expressive tailgate shape that’s joined by what Seat calls a ‘coast-to-coast’ full-width LED tail-light. Said to increase the Leon’s visual width, it also integrates the central brake light to replace the usual unit mounted high in the rear window. Further details on top-spec cars include scrolling indicators and an Audi-style animated lighting display when the car is unlocked. 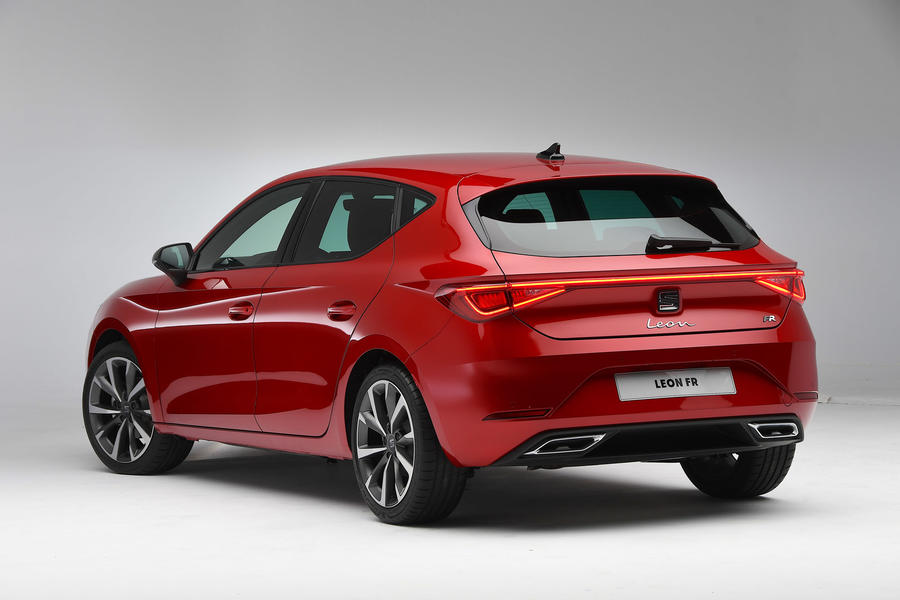 Size-wise, the new Leon is 17mm wider and just 3mm lower than the old car, but a significant 86mm has been added to its length, with 50mm of that in the wheelbase. Chassis development chief Marcus Keith claims this has all gone into rear leg room (a claim this 6ft 3in reporter can substantiate). Along with features such as three-zone climate control and a pair of USB-C ports in the rear, this is aimed at making the Leon’s rear quarters a lot more accommodating.

The new Leon Estate is 93mm longer than its predecessor but has the same wheelbase extension. While boot capacity is unchanged in the hatchback (“Our customers were fine with that,” says Keith), the wagon has gained 30 litres, taking it up to a Ford Focus Estate-beating 617 litres.

The interior innovations are most profound in the front, though. Much influence has been taken from the new Golf, most notably in the infotainment system. On SE Dynamic trim and above, the Leon features a 10.0in touchscreen, while the climate functions are integrated via a dedicated portion of the display and separate touch-sensitive ‘sliders’. This set-up is complemented by a 10.25in configurable digital instrument display (cheaper variants retain conventional analogue dials).

Tamar Braxton pays tribute to boyfriend for ‘saving my life’ –...