The Western Kentucky University football program’s turnaround season in 2019 brought tremendous exposure to the athletic department and university. A new analysis has valued that media/marketing exposure at nearly $35 million.

The study completed by Joyce Julius and Associates, Inc. – which takes into account national television, television news coverage, print media, internet news and social media from Aug. 1, 2019, through Jan. 15, 2020 – valued the exposure generated by the WKU football program in that window at $34,880,591.60.

That valuation is based on how much the exposure would cost in the open market if purchased at current marketing rates. 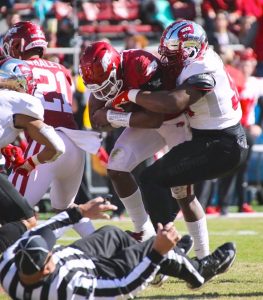 Western Kentucky cruised to a 45-19 victory at Arkansas last season.

“This study brings great perspective to the positive impact of WKU athletics in many areas,” WKU director of athletics Todd Stewart said. “We often call athletics the ‘front porch’ of the university, and that’s never been more evident than this media exposure valuation, particularly in regard to our bowl game victory – one of four in the last six years. Considering this analysis looked at just one of our 16 programs and that the total number for our full department would be significantly higher, it becomes clear how bright the spotlight of WKU athletics shines on Western Kentucky University.”

After going 3-9 in 2018, the Hilltoppers went 9-4 in the 2019 season under first-year head coach Tyson Helton for the third-best improvement in the nation.

The season included a 45-19 blowout win at Southeastern Conference foe Arkansas and concluded with a 23-20 victory over Western Michigan in the First Responder Bowl, the program’s fourth bowl title in six seasons. It was also WKU’s sixth bowl appearance overall in the last eight seasons.

READ  A letter from the editor-in-chief: Why SmartCompany has signed up to Google's News Showcase - SmartCompany.com.au

According to the valuation, WKU football generated nearly $19 million in exposure through internet news, fueling more than 18,000 mentions/articles and over 670 million impressions. Some of the top outlets within that coverage were Yahoo!, MSN, Business Insider, the New York Times, USA Today and Forbes.

Two of the season’s top moments that were a primary focus of the study were the Hilltoppers’ road win at Arkansas on SEC Network and its walk-off victory in the First Responder Bowl on ESPN. The nature of both victories was a catalyst toward significant exposure through other media as well. 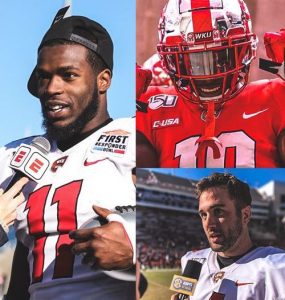 A new analysis has valued WKU football media/marketing exposure in 2019 at nearly $35 million.

In total, Joyce Julius puts a conservative estimate on the media exposure value of the First Responder Bowl alone for WKU in excess of $13 million.

Additionally, the Hilltoppers’ win at Arkansas was valued at about $500,000 in national TV exposure.

The program generated more than 84 million social media impressions during the 2019 season, with that exposure valued at $2.4 million.

Joyce Julius and Associates, Inc. is an independently owned and operated research company. It has provided independent sports, special event and entertainment program evaluation since 1985, including programs from the top levels of college athletics.

The firm’s national television exposure value is based on Recognition Grade (RG) methodology, which takes into account elements such as size of the identity, screen position, brand clutter and any applicable brand integration. When directly comparing on-screen time and mentions to the program’s 30-second commercial rate (without applying RG methodology), a national television exposure value of $9,959,877.98 is realized.