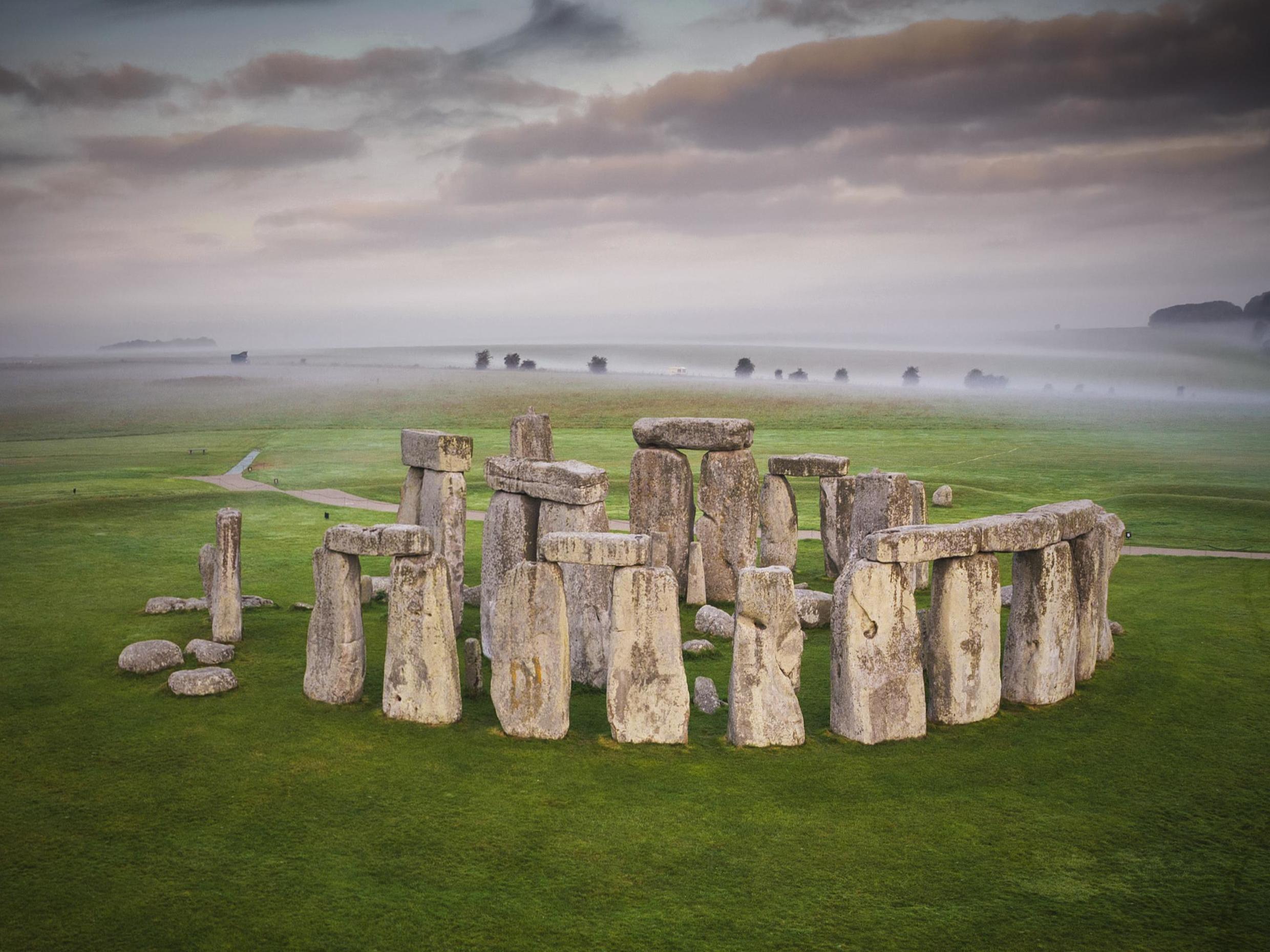 The Independent employs reporters around the world to bring you truly independent journalism. To support us, please consider a contribution.

Archaeologists have solved one of Stonehenge’s greatest mysteries — the precise source of the world-famous prehistoric temple’s largest stones.

A new scientific breakthrough has, for the first time, allowed geologists to pinpoint almost exactly where Stonehenge’s giant stone uprights and lintels came from.

Up until now, all that archaeologists knew with reasonable certainty was that the stones (a type of rock known as sarsen) had been brought in around 2500BC by the great temple’s Neolithic builders from the Marlborough Downs or immediately adjacent areas — a 75 sq miles area, 15-25 miles north of Stonehenge.

But now scientists from the University of Brighton have traced the stones to a small very specific two sq mile part of that range of hills — a patch of woodland just south of the village of Lockeridge, Wiltshire.

In prehistoric and indeed later times, that area (now known as West Woods) seems to have been strewn with particularly large sarsen boulders, geochemically identical to those used to build Stonehenge.

Recent detailed examination of the West Woods area by Reading University archaeologist, Katy Whitaker, suggests that the builders of Stonehenge probably chose it as their source of stone because of the exceptional sizes and relative flatness of many of its sarsen boulders.

New archaeological research about the site has revealed that even 1200 years before Stonehenge was built, the West Woods area’s great sarsen slabs were used to construct a massive local prehistoric tomb.

Now that the source of Stonehenge’s great stones has finally been identified, archaeological attention is likely to turn to discovering the precise route used by the monument’s prehistoric builders to move the giant 20-40tn stones from West Woods to Stonehenge (a distance of around 15 miles).

There are two main options — an eastern route down the Wiltshire Avon Valley and a western route across Salisbury Plain.

The western option would have involved a short segment where they would have had to haul the boulders up a 14 per cent gradient for around 300m.

But the eastern option would probably have involved hauling the giant stones (around 80 of them) for at least six miles along a river valley through relatively dense woodland and scrub. It would almost certainly not have been possible to use a raft on that river (the Wiltshire Avon) because the width of raft required to transport such large boulders would almost certainly have been much greater than the width of the river itself.

On the balance of probabilities, it’s perhaps more likely that the builders of Stonehenge opted for the western route, despite the need to haul the stones up a hill.

That route would have taken them south from West Woods across the southern part of the Marlborough Downs and down a very steep hill into the Vale of Pewsey. They would then have taken what was perhaps an already ancient trackway past (or indeed through) a huge prehistoric ritual and ceremonial complex (at Marden) across the river Avon and then up onto Salisbury Plain.

It was that ascent onto Salisbury Plain, which involved the only moderately steep part of the journey (the 14 per cent gradient). Then they would have crossed the relatively flat and unforested plain to Stonehenge itself.

If they did opt for this, on balance easier, western route, then the fact that they (and their massive stones) would have passed by or through the Marden ritual complex is potentially significant.

In architectural terms, Stonehenge was destined to be the most impressive religious complex in Neolithic Britain — but Marden may well have been the biggest.

Archaeological investigations over recent years (led by archaeologist, Dr Jim Leary, now of the University of York) have revealed that the Marden complex consisted of three great monuments — a vast 500m diameter banked enclosure north of the River Avon, a huge roughly 20m tall, 70m diameter ceremonial mound in the centre of that enclosure — and another banked enclosure, south of the river, surrounded by a 100m diameter circle of massive 1m diameter wooden “obelisks”.

Having discovered the source of the giant stones of Stonehenge, archaeologists may soon be in in a position to make another potentially significant discovery about more than 100 fragments of sarsen stone found at Marden.

In deploying the same scientific techniques used to pinpoint the source of the Stonehenge sarsens, scientists may ultimately be able to discover where the Marden fragments came from. Detailed preliminary examination of those enigmatic fragments will begin later this year.

Those fragments appear to have been gathered together in the Marden ritual complex at around the same time that the Stonehenge sarsens may have been passing through that monument.

So if it were ultimately to turn out that the Marden fragments came from West Woods, then it is conceivable that those fragments may have been removed from Stonehenge-bound sarsen boulders — potentially to shape them (and thus reduce their weight) prior to their ascent onto Salisbury Plain.

Sarsen stone, the type of rock used to build Stonehenge and Avebury stone circle, may well have been regarded as profoundly mysterious by prehistoric people — because they normally only occur as loose or semi-buried boulders, completely unconnected to any bedrock. Indeed, the bedrock in the Marlborough Downs is chalk — so the presence (back in the Neolithic) of hundreds of thousands of often huge boulders composed of an obviously totally different type of stone (sometimes even arranged in straight lines across the landscape) would have been seen by prehistoric people as unusual.

Worldwide, anomalous stones have often been regarded by many cultures as spiritually and physically interchangeable with humans — sometimes with a belief that particular stones contained the souls, spirits or even the transformed mortal remains of the dead. The belief was widespread, occurring on virtually every continent.

It is likely therefore that the builders of Stonehenge, Avebury and other stone circles perceived sarsen in both practical construction terms and also in more spiritual ones.

In geological terms, sarsen is just a very hard sandstone. It was formed around 50 million years ago when fresh groundwater gradually deposited additional silica while flowing through sand deposits. In some places, that silica then acted as a natural “glue” to bind trillions of sand grains together, thus forming solid rock.

When later erosion subsequently removed the surrounding “unglued” (ie loose) sand, all that was left were the sarsen boulders.

Because the chemicals in the original sand varied from locality to locality, modern scientists have now been able to develop a way of producing very accurate chemical fingerprints for sarsen stones from different locations. The system has been developed by University of Brighton geomorphologist and geographer, Professor David Nash. He has now used it to solve the mystery of where Stonehenge’s sarsens came from. It’s the first time that sarsen “fingerprinting” has been used to solve a major archaeological puzzle. The new British Academy funded research is being published today by the American on-line free-access journal Science Advances.

“It has been really exciting to harness 21st-century science to understand the Neolithic past, and finally answer a question that archaeologists have been debating for centuries,” said Professor Nash.

“The builders of Stonehenge wanted the biggest, most substantial stones they could find,” she added.

As well as the giant sarsen stones, Stonehenge also has a significant number of much smaller stones (the so-called bluestones). Over the years, scientists have succeeded in demonstrating that those smaller (2-3tn) standing stones were brought by Stonehenge’s builders from southwest Wales.

Professor Nash was able to analyse the Stonehenge sarsens because a core extracted from one of the monuments giant stones during repair work in the 1950s (and taken to America by one of the engineers involved in that work) was returned to English Heritage last year.

Extraordinary 2,500-year-old grave of an ancient Scythian 'warrior couple' is unearthed in Siberia

Botswana says it has solved mystery of mass elephant die-off