The GS66 Stealth is an updated version of MSI’s more subdued gaming range – and this revised model is smarter and sleeker-looking than previous generations.

This machine has been kitted out with an Intel 10th-gen CPU, an Nvidia RTX graphics card, future-proofed connectivity and a screen with a monster 240Hz refresh rate.

But it’s not all good news as there’s tough competition from the likes of XMG’s Fusion 15 and the Asus ROG Zephyrus 14.

Older versions of MSI’s Stealth laptops paired black metal with gold highlights, but the gold has gone on this machine – the GS66 is all dark, matt metal. The Stealth looks superb: just as smart as the Asus, and far better than the underwhelming XMG. Build quality is top-notch, too; the GS66 is robust, with a strong screen.

The sturdy design does have a downside – size and weight. The GS66 is 19.8mm thick and weighs 2.1kg. Those aren’t awful, but there are more svelte rivals out there if you’re looking for the most portable gaming laptop. 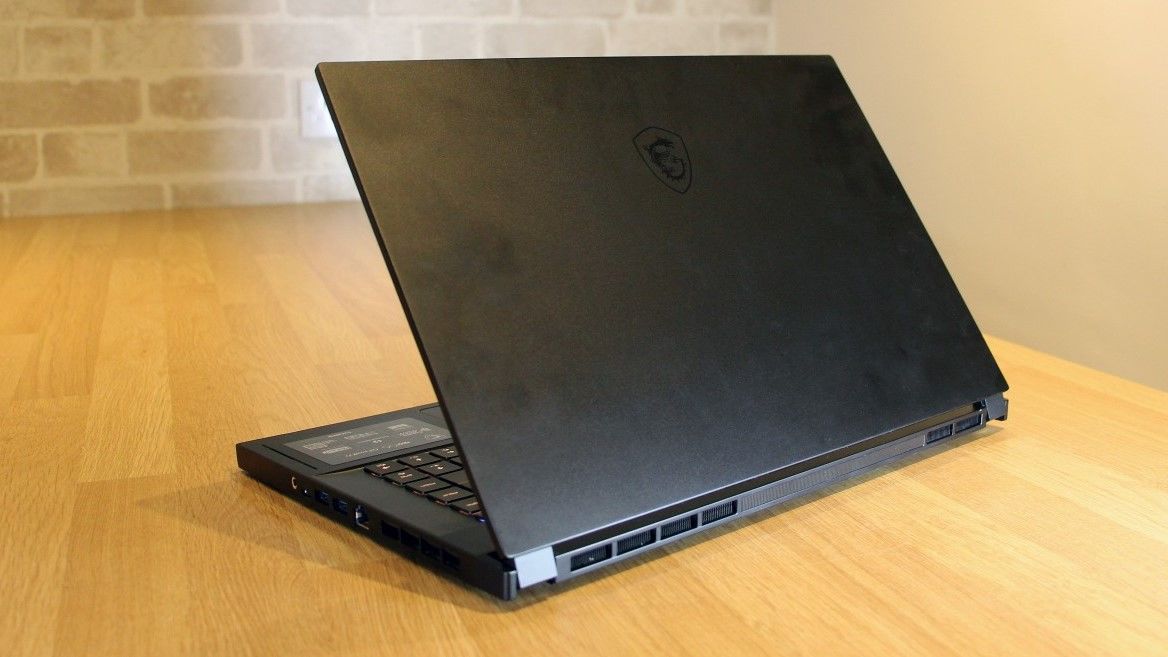 The GS66 does fight back when it comes to practicality. It’s got three full-size USB 3.2 ports and two Type-C connectors – one of which supports Thunderbolt 3.

The GS66’s chiclet keyboard comes from SteelSeries. The keys have 1.5mm of travel, which is good, and they’re fast, snappy and comfortable, with a crisper action than most chiclet keyboards. The RGB LEDs are bright, and the wide keys mean these keysare easy to hit at speed.

The Asus’ keys have more travel, but the typing action is a little softer, and its buttons are smaller. On balance, the GS66 is slightly better for gaming.

The XMG goes beyond both machines, though: that laptop has a mechanical keyboard, with fast buttons that have loads of travel. That laptop offers far more satisfying typing.

The GS66 is a great example of a chiclet keyboard, although it’s not without issues. There’s no numberpad, which is admittedly a trait shared by both of the MSI’s rivals. The GS66 has annoyingly tiny Function and right-hand Control keys, and there are no media shortcuts on the function row. 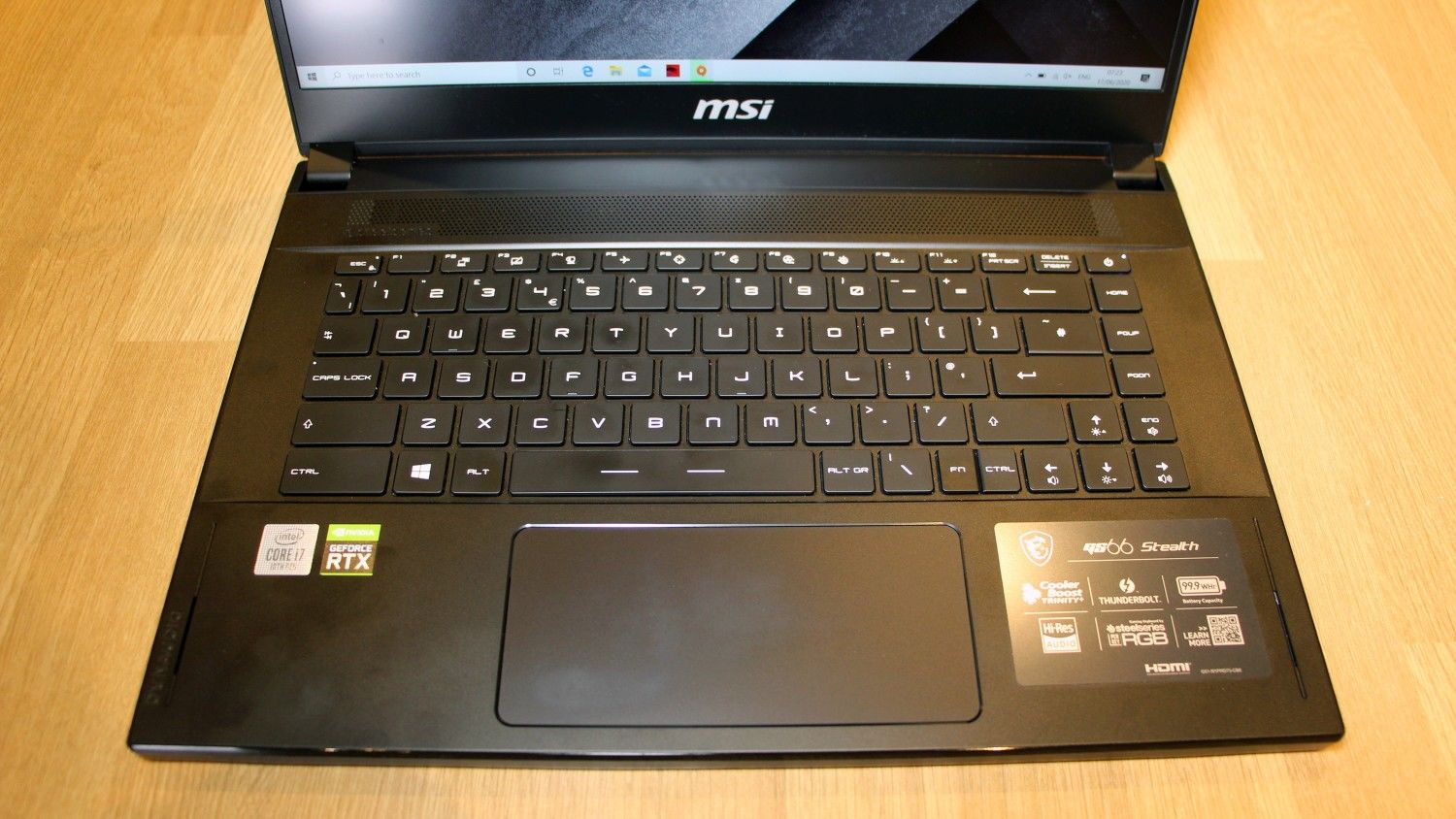 The trackpad is wider than the units included on both rivals, and it’s accurate, with snappy buttons. A USB mouse is always better for gaming, but the MSI’s trackpad is easily useable for slower games and mainstream titles.

The GS66 has a 1080p display with a whopping 240Hz refresh rate. That’s a stunning figure – one of the highest available in any laptop. The Asus doesn’t offer this unless you step up to 15.6in models, and it’s not an option on the XMG at all.

READ  Bay Area Gardening Q&A: ‘Why do my apples have worm holes but no worms?’ - The Mercury News

The 240Hz refresh rate is designed for eSports, where faster rates mean games run at higher framerates with faster inputs without tearing or blurring. For competitive games, having a better refresh rate can deliver an advantage.

The MSI’s screen works well: fast-paced motion is smoother and crisper than on either rival, and the absence of Nvidia G-Sync doesn’t have a big impact.

Bear in mind that 144Hz screens are still easily good enough for single-player gaming and mainstream eSports – the jump between 144- and 240Hz is noticeable, but not transformative.

It’s brilliantly smooth, but only high-end players will find it essential. 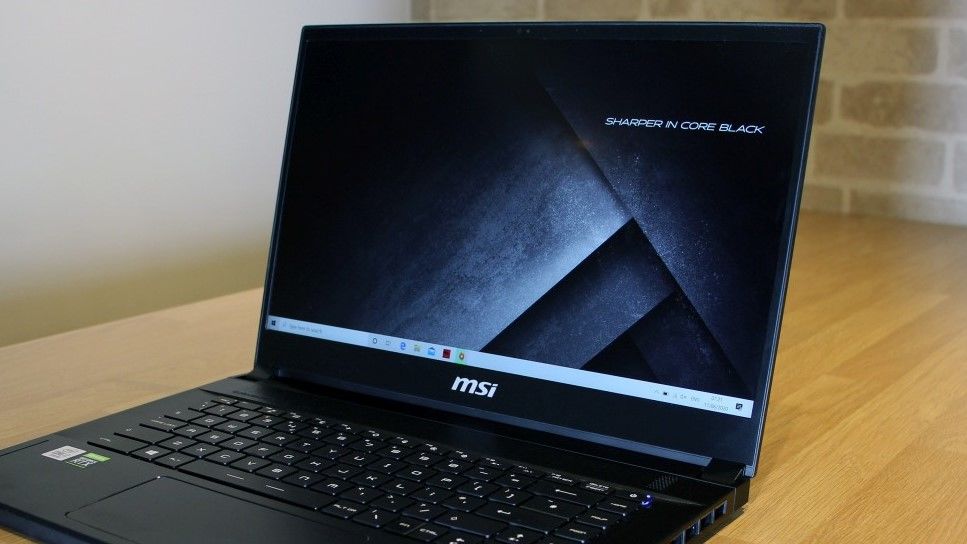 The stunning refresh rate is paired with superb quality. The brightness level of 324 nits is high enough for all indoor scenarios, and the contrast ratio of 1,246:1 is a great result for an IPS display, offering ample punch and depth in dark and bright areas.

The average Delta E of 1.37 is superb, and means colours are accurate. The MSI’s display handled 95.4% of the sRGB colour gamut, which is ample for conventional gaming – although its sub-70% DCI-P3 and Adobe RGB figures mean it’s not suitable for high-gamut scenarios or colour-sensitive work.

The GS66 Stealth offers better contrast and more accurate colours than the XMG as well as its better refresh rate. Aside from the absence of G-Sync, the Stealth’s screen has no major weaknesses.

Audio gear, though, is disappointing. The speakers are loud, but bass is missing and they’re too tinny. A headset will be far better, and the Asus is notably better.

The GS66 Stealth relies on an Nvidia GeForce RTX 2060 graphics card with 6GB of memory alongside a new, six-core Intel Core i7-10750H processor. The specification is rounded out by a rapid 512GB SSD, 16GB of memory and future-proofed connectivity hardware – this machine has WiFi 6 and 2.5Gbps Ethernet.

The MSI fell slightly behind these machines in real-world tests, but it still proved quick in updated gaming tests. In Far Cry: New Dawn’s Ultra test it averaged 75fps, and it hit a superb 96fps in Wolfenstein: Youngblood. 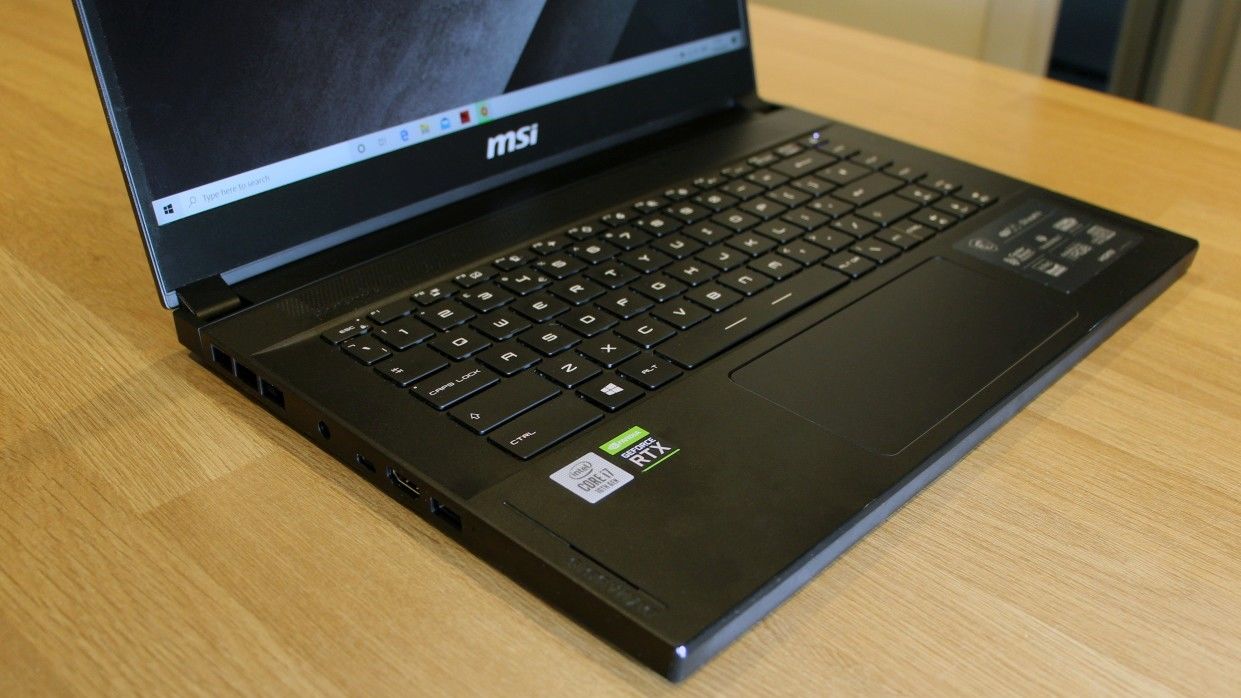 I’ve also added the Acer Nitro 5, which was tested since writing this review, in the benchmark graph below. It shows how you can get similar framerates at a lower price – if a 120Hz screen is enough for you.

Importantly, the MSI also has the pace to play esports games at beyond 200fps, which means that they can run capably on the 240Hz screen.

The GS66 has the CPU power to handle day-to-day work and web-browsing, and it’ll handle multi-tasking, Office tools and reasonably demanding photo-editing. There’s a spanner in the works here, though: the Asus’ AMD CPU is an eight-core beast that delivered scores of 30,285 and 5,682 in Geekbench and PC Mark.

Those benchmark differences won’t be noticeable in day-to-day use, but if you want to handle tougher work then the AMD-powered Asus will be better.

The GS66 is a little inconsistent in thermal tests too. This laptop does produce fan noise, but it’s no worse than rivals. The bigger problem is heat: hot air is ejected from the right-hand side, which is annoying if you’re using a USB mouse, and the keyboard and underside both become a little too warm.

On the inside, the CPU’s temperature sometimes went beyond 90°C and saw the CPU throttle to its base speed of 2.6GHz. That’s another reason why this laptop is better for gaming than for work.

In a video playback test with the screen at 120 nits, the GS66 lasted for eight hours and 22 minutes.

That’s enough longevity to handle a good box-set binge, but it’s unable to keep up with the competition: the XMG lasted for nine hours, and the Asus ran out of juice after more than eleven hours.

The GS66 lasted for just over two hours in a gaming test. That’s not a bad result – good enough for a gaming session on the commute – but it’s still behind both rivals.

You can buy it from Amazon or Overclockers – or Gentech in the US. 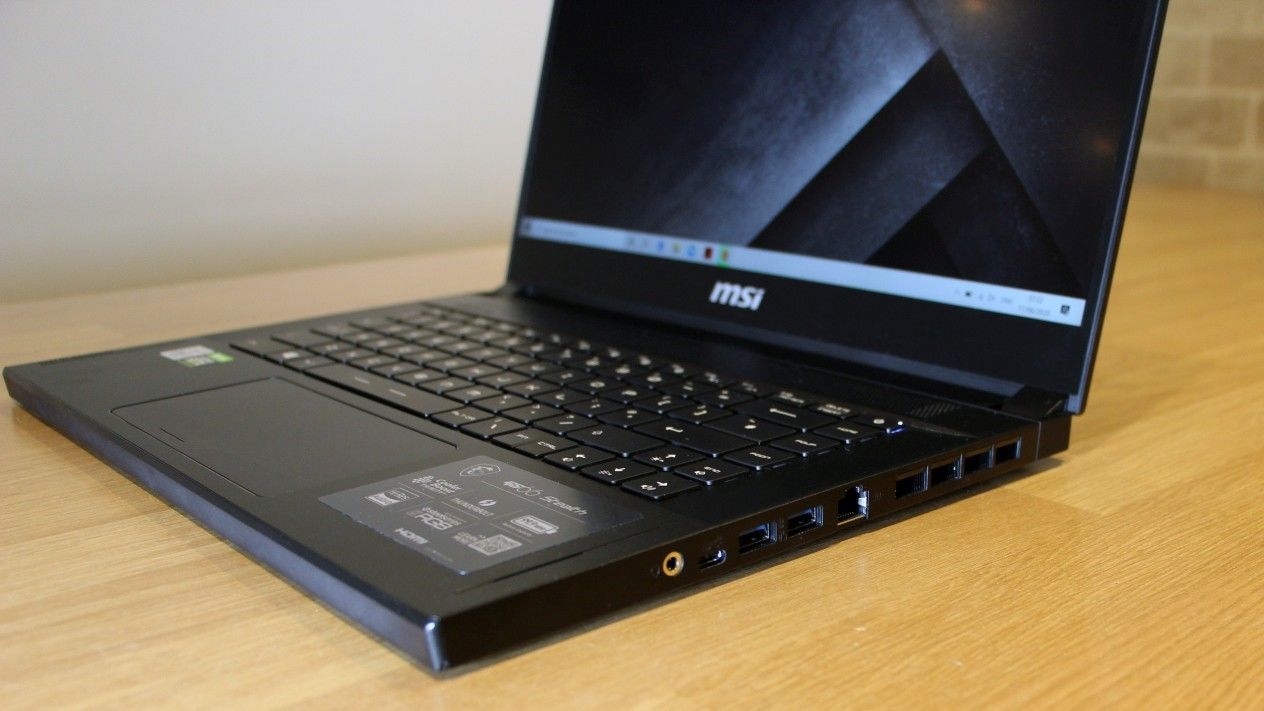 The GS66 Stealth can also be purchased in several configurations. The 240Hz screen can be paired with an RTX 2070 graphics core for a price of £2,099 or $2,249, and there are pricier models with RTX 2070 Super and RTX 2080 Super GPUs alongside lightning-fast 300Hz displays.

Check our chart of the best gaming laptops to see our top 10.

The MSI GS66 Stealth is built around its screen, and that’s no surprise: the 240Hz display included here has smooth, fast operation for eSports, ample ability for single-player gaming and great quality levels.

Elsewhere, though, this machine is a little more ordinary. The GPU and CPU are both good: the former is fast enough for single-player gaming and competitive eSports, and the latter can handle most work tasks.

However, there are rivals with more graphics power and CPU ability depending on what you’re after. There’s battery life out there, too, and the MSI is undermined by some CPU temperature problems.

On the outside, the GS66 Stealth has sleek design and a good keyboard, but again it’s not a market leader in either area.

The 240Hz screen and solid internals make the MSI GS66 Stealth a good option if you need the sheer display speed for esports and fast-paced gaming.

If not, though, there are other laptops that are faster and more well-rounded.

How to overclock your GPU

Can you really get fit on an electric bike?

Microsoft 365, Outlook and Teams were down, but this trick helped

How to turn off the annoying AirPods automatic switching feature

‘Apple Festive’ offers a taste of Fall in Ithaca – WBNG-TV