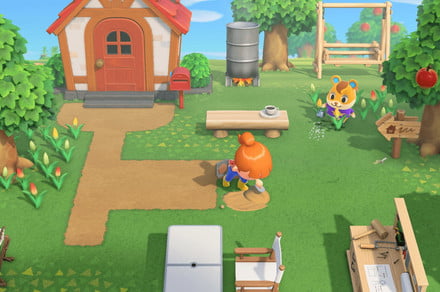 After a quiet lull, Nintendo revealed a swatch of new details about Animal Crossing: New Horizons in its latest Direct presentation. The 25-minute video unveiled new customization tools and confirmed the return of several familiar features and faces.

The Deep Dive Into Deserted Life livestream made it clear that New Horizons won’t be a departure for the series. Several staples of the franchise made an appearance in the presentation, including buildings like Nook’s Cranny, Able Sisters, and the Museum.

Previously, Nintendo only detailed Resident Services, where players can craft items. The Direct gave more details about its function, showing how it can be used to customize furniture with hand-made designs and make changes to houses once players upgrade their tent. When Resident Services expands, it will allow players to build bridges and slopes around town through a Construction Consultant feature.

The building will be home to fan-favorite Isabelle, who will return for the game.

Other new customization features will allow players to alter an island’s terrain, letting them add or remove cliffs and rivers via an Island Designer App in the game’s Nook Phone. The app will also allow players to freely pave paths around their island once unlocked.

Home decoration receives a slight overhaul, allowing players to select and move multiple pieces of furniture at once.

A big part of Animal Crossing’s appeal is its online and local multiplayer modes, which are handled through an island’s airport for New Horizons. Among the new features is Party Play, which allows four of one island’s residents to play together on one Switch. Online play will feature a restriction that prevents players from using axes and shovels on the island unless they are designated as a “Best Friend.”

Regular free updates are planned for the game, which will bring seasonal events. The first will be available on launch day, bringing a Bunny Day event to the game. So far, Nintendo only revealed that free updates will include more events, something that’s always come baked into the game, and further amiibo support. Beyond the updated content, the game features regular seasonal activities and recurring events such as fishing tournaments and bug-offs.

New Horizons will utilize the Nintendo Online app with a Nook Link tool. In addition to providing communication options via voice or text, the app will allow players to scan QR codes from Animal Crossing: New Leaf and Happy Home Designer and import custom designs into New Horizons.

Amiibo support returns to the series, letting players invite villagers to their island through the new Campground building.

While all of the new features are exciting for fans, the Direct did feature one rub. Nintendo touched on the game’s controversial decision not to allow cloud saves, saying that players would only be able to recover lost save data through a service backup in “special cases.” However, players can only retrieve their data once, and they have to be a Nintendo online member. It’s also available “sometimes after launch,” so it won’t be in the game come release day.

The short video is packed with even more details, from bee stings to returning characters like Gulliver and Sahara, giving the sense that New Horizons is a more of a traditional Animal Crossing game than its deserted island setting initially implied. We’ll soon see what else returns to the game when it launches March 20, just after its special-edition Switch arrives.

Paper Mario: The Origami King is coming to the Switch in July

Torchlight 2 still has the best names in all of video games – Eurogamer.net

Security is an issue when it comes to old Android phones...