Research conducted by Uswitch has discovered that the cost of top-end mobile phones has soared by a whopping 490% over the last 20 years, with premium smartphones now costing over half of consumers’ average monthly wage.

Back in 2000 at the start of the millennium, the average mobile phone cost £72.50 and had fairly limited functions apart from making phone calls. You could also send short text messages and perhaps play a very basic game – such as the Nokia classic, Snake.

Modern smartphones do a whole lot more than their old school counterparts. They’re essentially mini-computers loaded with useful apps and ways to be entertained – it’s safe to say they’ve changed the way people live. The average mobile phone currently costs £355, but that goes up quite a bit when you look at the top end, premium devices.

Samsung is gearing up to release its latest premium smartphone, the Galaxy Note 20 Ultra, on 5th August, and current predictions have its price set at an eye watering £1,300. This price tag will put it in the same league as Apple’s flagship iPhone 11 Pro Max which is one of the most expensive smartphones ever released.

Of course, you don’t have to spend that much money as there is a great deal of choice and variety in the market. At the budget end ‘dumbphones’ like the Alcatel 10.66 cost just £54, and even Apple’s 2020 iPhone SE costs only £419, which may seem expensive but is less than half the price of the brand’s premium devices. 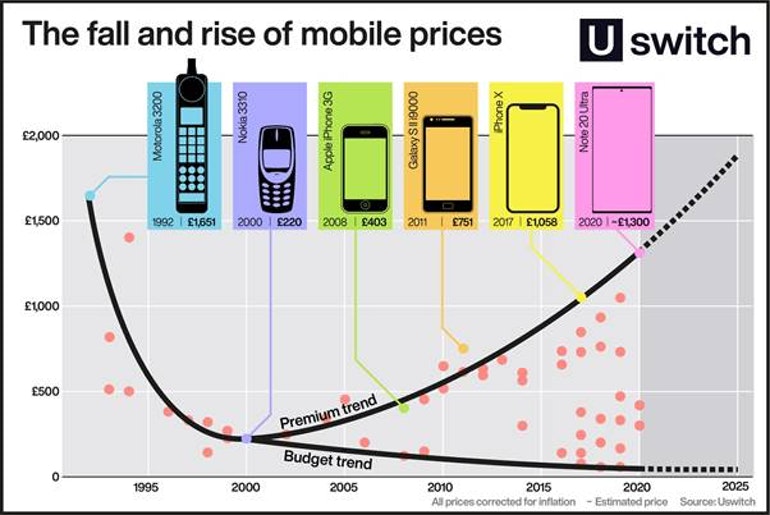 Interestingly, mobiles in the 1990s were actually seen as luxury products and in relative terms their costs were even higher than what we pay now. The Motorola 3200 was released in 1992 when it would have set you back £762, which works out to a huge £1,651 today when considering inflation rates. That’s easily more than any iPhone or Samsung Galaxy we’ve so far seen.

Ru Bhikha, mobiles expert here at Uswitch, said: “Mobile phones these days do the job of a camera, music player, television and computer, but you certainly pay the price for having all that tech in your pocket.

“Premium smartphones broke through the £1,000 barrier a while ago, and there’s no sign of the prices coming back down.

“We pay for our smartphones in manageable monthly payments, so it’s easy to forget how much we’re spending on these technological works of art.

“Although top-end handsets are soaring in price, there are models on the market to suit every budget, with the Samsung Galaxy A10 costing just £139, and the iPhone SE offering great value at £419.

Finding it hard to pick a mobile? Our guide on buying your first smartphone might help

Smartphone tax filings to be allowed from next year – Taipei Times

20 best apps to get you organised – The Guardian

‘Astronomical growth coming’: 43% of global active smartphones will be 5G-ready by 2023 – RT