Unemployed Minnesotans numbered 137,359 in October, down approximately 44,500 from September, while the number of employed Minnesotans slid by approximately 2,445 to roughly 2.8 million. The labor force participation rate, which measures the share of working-age people who are either employed or seeking employment, fell to 67.4% last month, down 1.6% from September.

October was the second consecutive month that labor force participation declined, according to the Minnesota Department of Employment and Economic Development, and the reasons people have for dropping out of the workforce are varied. In a statement, though, DEED Commissioner Steve Grove emphasized that “companies in many fields are hiring.”

Minnesota’s economic outlook is improving despite the battering it took earlier in the coronavirus pandemic. The total number of employed Minnesotans is up by nearly 110,000 compared to its low point in May and the number of unemployed workers has decreased by approximately 165,600 since then, too.

But the state has yet to fully recover the stronger economic position it inhabited earlier in the year, when the unemployment rate was lower and the workforce was more active. The state’s labor force participation rate in February, just before the pandemic and recession hit, stood at 70.2%.

And economic pain caused by the coronavirus pandemic also continues to be felt more acutely in Minnesota’s communities of color. From May to October, Black Minnesotans averaged an unemployment rate of approximately 15.4%, according to DEED, up from 5.3% a year earlier.

The unemployment rate for Latino Minnesotans, meanwhile, stands at 9.6%, an increase of 2.6% from a year ago.

Minnesota did add approximately 13,200 payroll jobs in October while the U.S. as a whole gained about 638,000. Nationwide, the unemployment rate for October stood at 6.9%, down a percentage point from September, while the labor force participation fell three-tenths of a percentage point to 61.7%

Only two of Minnesota’s “supersectors” lost jobs in October. Professional and business services lost 3,100 jobs, all of which were in administration and support, while the information sector lost 1,200. 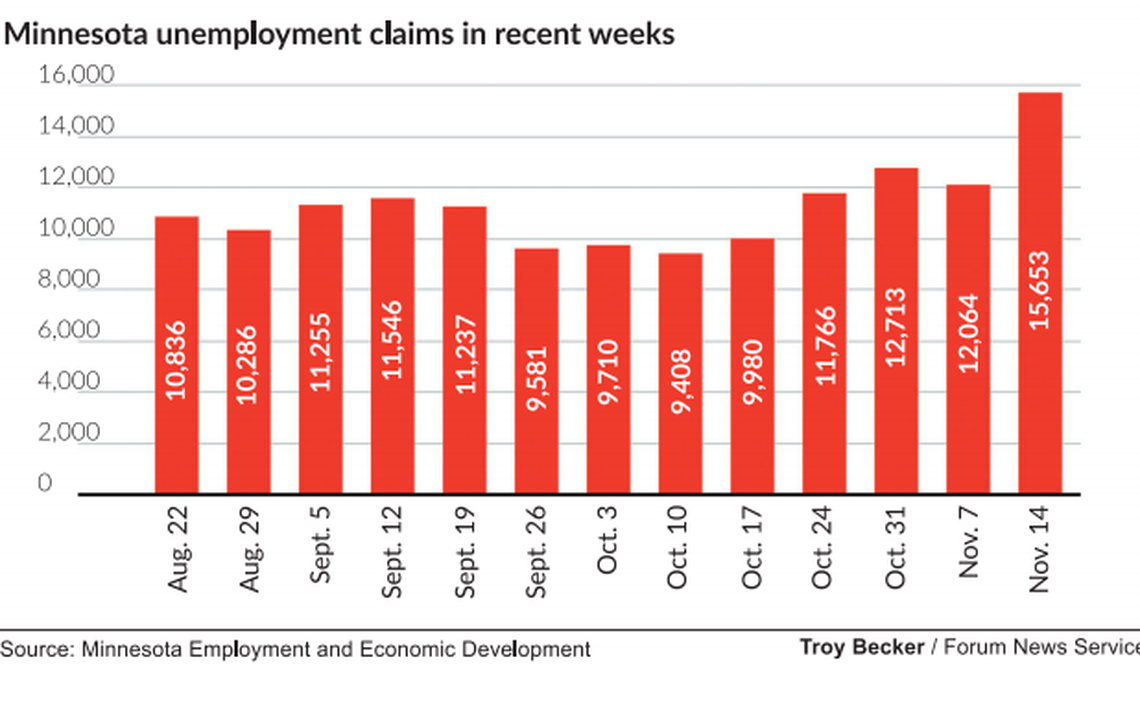