The Microsoft Surface Pro 7 is the embodiment of “if it ain’t broke, don’t fix it”, offering the same general form factor as the Pro 6 and, if we’re being honest, most of the Surface Pro range that came before it. But that’s not a bad thing; the Surface Pro 7 fills a need, with Microsoft describing it as “the most popular two-in-one on the market” when it was revealed.

Besides, like my mum always used to say, it’s what’s on the inside that counts, and with 10th-gen Intel Core processors and Iris Plus graphics now present, the Surface Pro 7 certainly has a lot going for it.

The Surface Pro 7 range starts at £799/$749 and goes up to a whopping £2,249/$2,299 depending on the processor/RAM/storage configuration you opt for. The cheapest is the Intel Core i3 model with 4GB of RAM and 128GB of storage, but it’s hard to recommend with lacking power and the omission of the Iris Plus graphics that make the other models perform so well.

The last two i7 variants offer the same amount of RAM but an increased 512GB and 1TB of storage, and cost £1,829/$1,899 and £2,249/$2,299 respectively. Considering you’re only getting additional storage, we’d recommend buying an external hard drive and making use of the USB-C port – it’ll work out much cheaper.

If you want to buy the Surface Pro 7 in any of the above configurations, you can head to the Microsoft Store along with Amazon and Currys PC World in the UK, as well as Amazon and Best Buy in the US.

If you need more inspiration, take a look at our selection of the best laptops available right now. 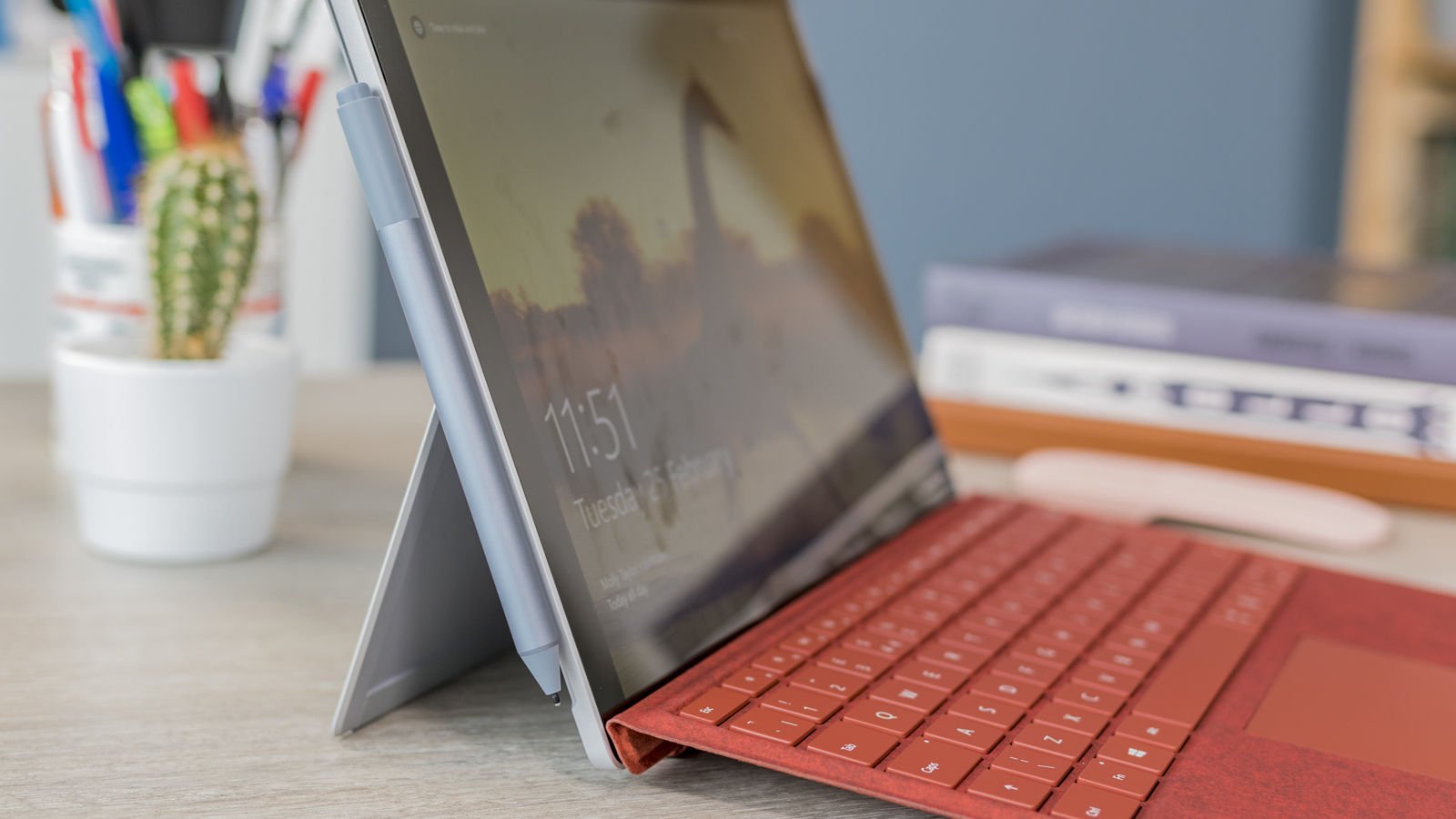 Like its predecessors, the chassis of the Pro 7 is crafted from solid metal, providing a sturdy feel, but the finish of the body means it’s likely to get scuffed and scratched as time goes on. It does a great job of protecting the 12.3in PixelSense display, which looks just as vibrant and detailed as ever, but the large bezels that surround it make the Pro 7 look dated compared to some budget laptops available in 2020, let alone Apple’s iPad Pro range.

The adjustable kickstand is present and accounted for, allowing you to angle the Pro 7 just about any way you’d want. Although not new, it’s our favourite design feature of the Pro 7, making it a versatile bit of kit that’s both comfortable to use as a tablet and as a laptop – as long as it’s on a flat surface like a table and not your legs. 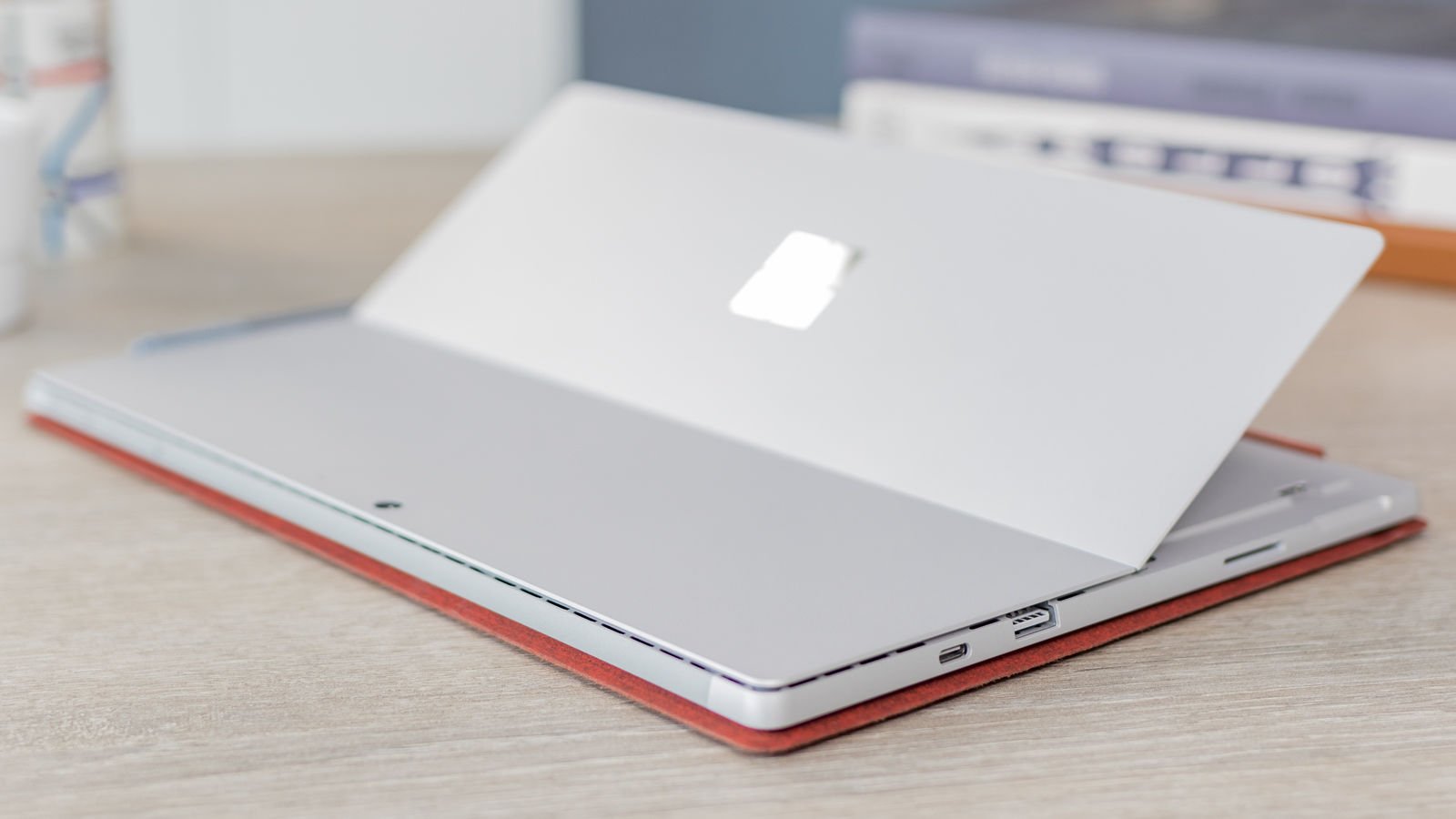 But while the Pro 7 seems like a trip down memory lane, there is one new feature: the inclusion of a USB-C port alongside the standard USB-A port, MicroSDXC reader and 3.5mm headphone jack. Disappointingly it doesn’t offer the transfer speeds of Thunderbolt 3, but it’s still a handy addition for those with a suite of USB-C accessories.

The Surface Pro experience is incomplete without the Type Cover keyboard case, which makes the fact that it’s an accessory that you buy separately an odd prospect. It snaps into place on the bottom of the Pro 7 via built-in magnets and, thanks to a microfiber finish, acts as a screen protector when not in use. The design, like that of the Pro 7 itself, is practically unchanged compared to previous generations – aside from new colour options – but it still provides a great typing experience with physical keys, and the trackpad comes in handy too.

You’ve also got the choice of picking up Microsoft’s Surface Pen and Arc Mouse, with the former allowing you to write naturally on-screen – ideal for designers and note-takers – while the latter provides something akin to a traditional mouse that can be flattened when not in use. These aren’t as integral to the Surface Pro experience as the Type Cover, but still worth picking up if you’ll get the use out of them.

Hardware and performance: Ice Lake to the rescue

The Surface Pro 7 may look nearly identical to its predecessors, but it differentiates itself in one key area: internal hardware. The Surface Pro 7 range sports Intel’s 10th-gen Ice Lake processors which, along with improved performance, brings Intel’s new Iris Plus integrated graphics to the table (as long as you steer clear of the base i3 model, anyway).

The unit we’ve been looking at has an Intel quad-core i7 1065G7 processor alongside 16GB of RAM, making it the most powerful variant in the Surface Pro 7 collection, although our model only had 256GB of solid-state storage compared to the maximum 1TB on offer. It’s also available in Core i3 and Core i5 variants with between 4 and 12GB of RAM depending on your requirements. 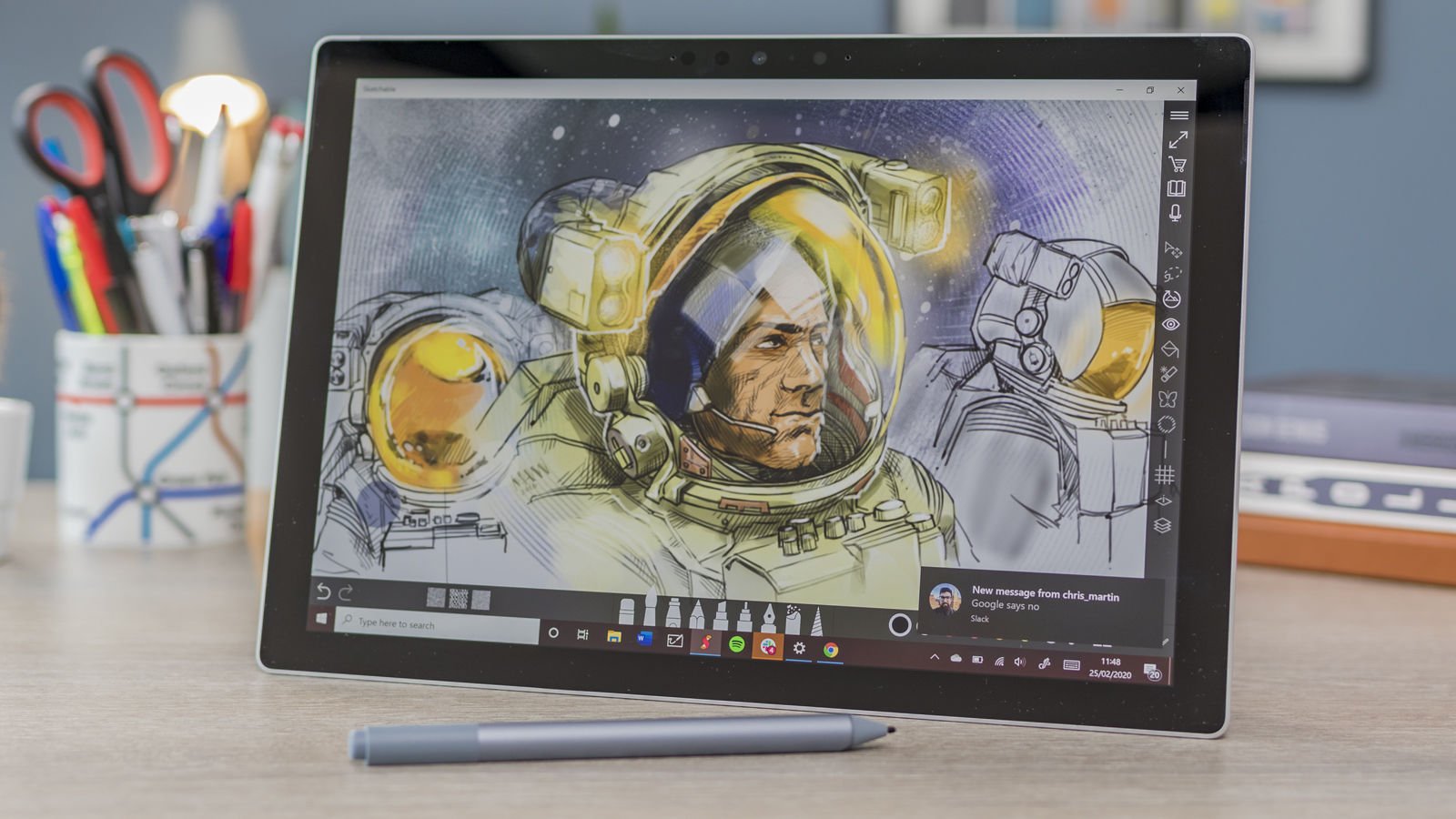 The difference in performance is significant compared to the Surface Pro 6 range, which featured 8th-gen Intel chips and Intel HD 620 integrated graphics. The Pro 7 is competent in just about every area, from standard word processing to more intense tasks like video encoding, and it’s even capable of 1080p gaming. Sure, you’re never going to hit 60fps on a game like Red Dead Redemption 2, but you can now run basic games like Fortnite with lower graphics enabled.

The upgraded internals also allows for improved instant-on performance, with the Pro 7 booting seriously fast, and that’s further enhanced by Windows Hello facial recognition that negates the need to enter a password at the login menu.

In our benchmarks, the Pro 7 scored 17,729 in the Geekbench 4 multi-core test and 3510 in PCMark 10, aligning itself with the likes of the Lenovo Yoga C740 and ASUS’ ZenBook Flip 15 in terms of power on offer. We break down the benchmark performance in the below chart to give you a better idea of what’s on offer from the top-spec Surface Pro 7 we’ve been using:

But, unfortunately, there’s a downside to the powered-up performance of the Surface Pro 7; compared to previous entries in the range, the battery life of the Pro 7 leaves a lot to be desired.

Sure, it can hit close to the advertised 10-hour battery life if you’re performing basic tasks like word processing, but as soon as you ramp up the performance with power-hungry tasks like photo editing, video transcoding or gaming, you’ll see a dramatic drop in battery life. We found that it’d not always last a typical 8-hour workday with a mix of emails, word processing and browsing social media without needing a top-up at some point during the day.

That’s not the dealbreaker it might be with other 2-in-1s and laptops because the Surface Pro 7 supports fast charging via the 65W charger included in the box. Although it still uses Microsoft’s proprietary Surface Connect charger over the more popular USB-C, Microsoft claims the charger is capable of providing 80 percent of charge in an hour, and that’s close to what we experienced during our time with the Pro 7.

If, like us, you tether the Pro 7 to its charger when on the desk and unplug it when required, you’ll likely not run into any real battery issues. 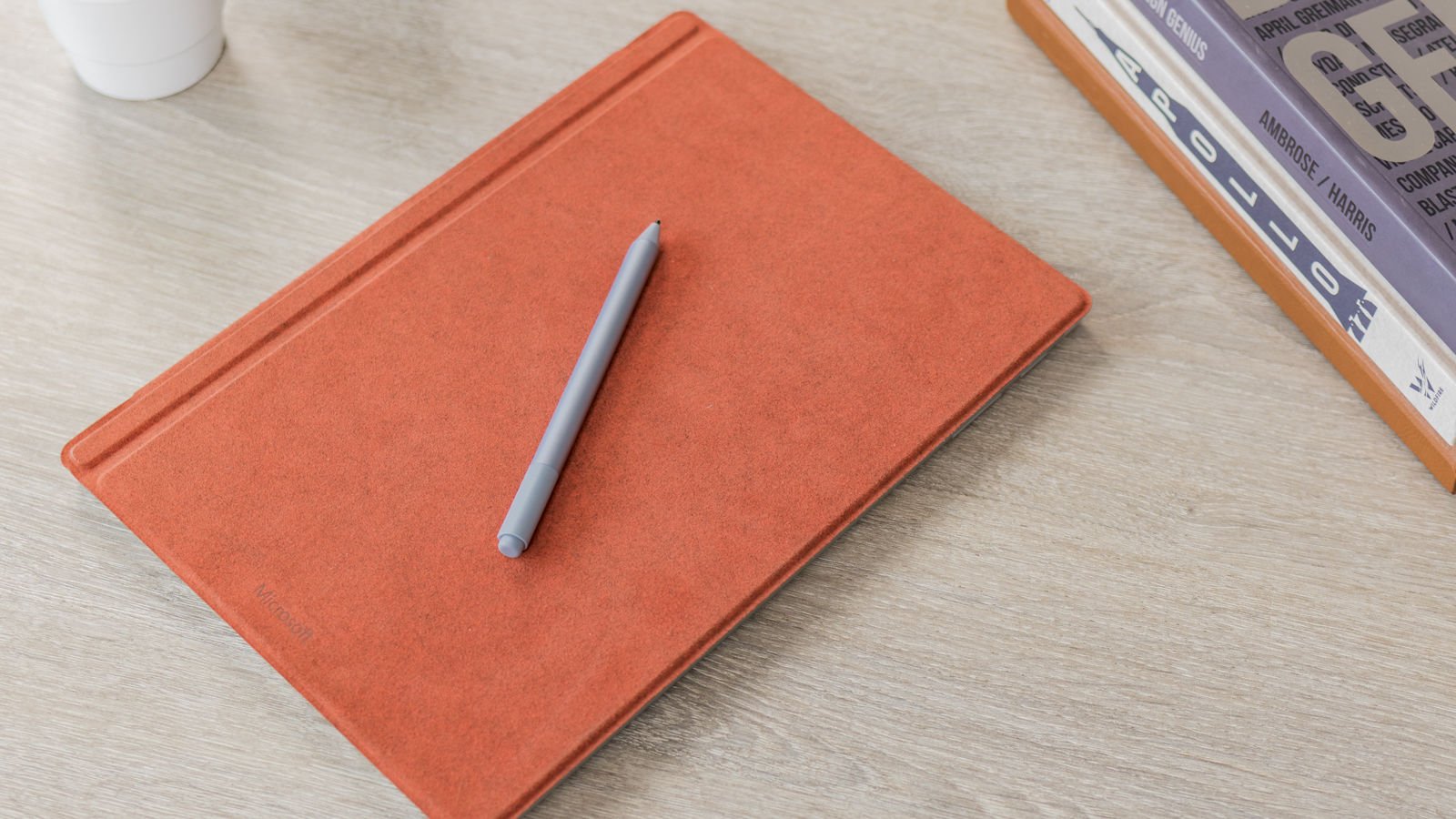 The Surface Pro 7 is a powerful tablet that doubles as a decent laptop if you opt for the Type Cover case, although trying to actually use it in your lap is a challenge not many will succeed with.

The improved internals and upgraded graphics are where the Pro 7 really shines. It’s certainly more powerful than the Pro X that was announced alongside the Pro 7, which uses an ARM processor more akin to what you’d find in a smartphone than a full-blown Intel processor, and it’s a massive jump forward from the Surface Pro 6 too. It’s still not a gaming laptop though, and admittedly cheaper laptops can offer more in terms of raw power, but the Pro 7 is way more versatile than a standard laptop.

We just wish Microsoft was a bit more adventurous in the design department, as it’s beginning to look a little dated compared to even some budget laptops available right now – especially the chunky bezels surrounding the display.

If you’re going to get the use out of the portability and flexible nature of the 2-in-1, the Pro 7 is worth considering, but there are more powerful laptops at a similar price if processing grunt is key.

The best iPhone docks for 2020

Samsung Health to come with 2020 smart TV lineup for fitness...