A little under half of all American households have a dog. However, “The People’s House” – the White House – has not had fur on the Oval Office rug in four years.

President Donald Trump was the first president since James Polk not to have a pet.

Does having a dog help a president? Can it hurt a presidency? We talked to a political scientist and a dog behavior expert at Arizona State University about the relationship between power and pooches.

Most presidents have had a dog, or a pet, or multiple pets. Horses have been the second-most popular pets for commanders in chief.

The occasional exotic animal pops up from administration to administration. Thomas Jefferson was given two grizzly bear cubs as a gift. (“Too dangerous and troublesome for me to keep,” he wrote. He donated them to a museum.) Benjamin Harrison kept two alligators in the conservatory. The emperor of Ethiopia gave Teddy Roosevelt a laughing hyena. Calvin Coolidge was given a parade of exotic animals — a black bear, a pair of lion cubs, a wallaby — all of which were swiftly shuttled off to zoos by Mrs. Coolidge. (Though she did keep a raccoon, in addition to a total of 12 dogs of various breeds.)

But dogs have generally been the presidential pet of choice. Politically, it’s a good decision because we sympathize and identify more with a president who has dogs, said canine behavioral expert Clive Wynne, a professor in the Department of Psychology and director of the Canine Science Collaboratory.

“I think a great many people find our pets very engaging, especially dogs,” Wynne said. “And so we find somebody more simpatico if they seem to share that value with us. In our normal interactions, if you and I met in real life and you had a dog and you were gentle to it, then that projects to me your sense of who you are. Right. And so by and large, we take that attitude when we look at our politicians.”

“When you read about 19th-century and first-half-of-the-20th-century presidents and their pets, presumably this is just a frank expression of how they felt about the animals,” Wynne said. “But at some point presidents and other politicians started getting public relations advisers who could say to them, ‘You know, look, get yourself (a dog). One of these will round the edges. This will soften the edges of your public persona.'”

Having a pet humanizes a president, agreed Kim Fridkin, a political science professor in the School of Politics and Global Studies

“In general, I think having a pet helps a president create a positive image,” she said. “Biden appealed explicitly to dog lovers during his campaign … And, Biden and Harris sold dog-related merchandise on their website.”

Like everything coming out of a modern administration, there’s a certain amount of calculation associated with presidential pups.

“I think presidents today consider the political ramifications of a dog’s name,” Fridkin said. “Naming a presidential dog Tipsy — one of President Washington’s dogs — is probably not as politically correct as naming a dog Liberty — President Ford’s dog.”

In the early years of the republic, that wasn’t an issue. John Adams had a dog named Satan. William McKinley had an Angora kitten named Valeriano Weyler. (Weyler was the Spanish Governor General of Cuba. He invented the concentration camp.) James Garfield had a dog named Veto.

Despite not being a supporter of the outgoing president, Wynne had respect for Trump not getting a dog.

“I think it could have helped him politically to have had a dog or to at least have occasionally said positive things about dogs,” he said. “I’ll grudgingly concede there’s something slightly refreshing about somebody who just says, “No, I think I’d look silly with a dog,” when he doesn’t care that it probably would have improved his electability.”

Nowadays even the dog’s origin will be scrutinized. A president having a rescue dog is going to be viewed more favorably than purchasing or receiving a purebred as a gift, Fridkin said.

“In fact, when the Obama family got Bo, (a Portuguese water dog), Obama received some criticism for not adopting a shelter dog,” she said. One of Biden’s dogs is a rescue.

But pets also can be a detriment for a politician. Fridkin pointed to Mitt Romney’s run for president.

When Romney was running, it was revealed that in 1983 the Romney family went on a vacation in their station wagon. The car was packed, so Romney attached a dog carrier to the roof rack of the station wagon with his dog (Seamus) inside the carrier.

“After 12 hours on the roof of the car, the dog got sick,” Fridkin said. “When reported (and repeated), the story generated a negative picture of Mitt Romney, along with some anti-animal cruelty protests.”

When Lyndon Johnson was photographed picking up one of his beagles by its ears, all hell broke loose. (Harry Truman defended him, saying, “What the hell are the critics complaining about; that’s how you handle hounds.”) Johnson managed to turn the whole episode into a triumph through deft public relations. 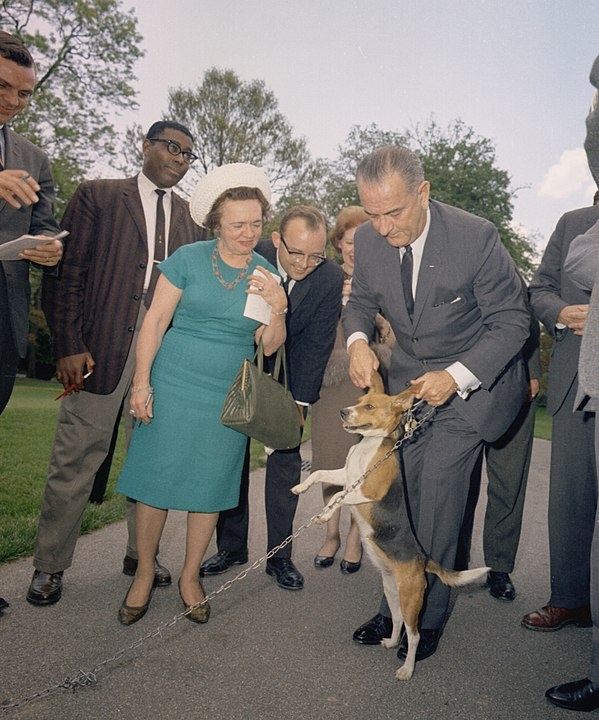 U.S. President Lyndon Johnson caused a storm of protest when he lifted his dog “Him” by his ears. May 4, 1964. Courtesy LBJ Library.

In 1944 Franklin D. Roosevelt was running for his fourth term when his Scottish terrier Fala had accidentally been left behind during a visit to the Aleutian Islands. Ships were dispatched to rescue the dog. Roosevelt was accused of spending thousands of taxpayers’ dollars. At a speech after the incident, Roosevelt said, “You can criticize me, my wife and my family, but you can’t criticize my little dog. He’s Scotch (sic) and all these allegations about spending all this money have just made his little soul furious.” The “Fala speech” helped Roosevelt win reelection.

There certainly have been presidential bad dogs. Teddy Roosevelt and Jimmy Carter both had dogs that had to be banished for biting White House visitors. How would that play now? It depends, said Wynne.

If the dog bit a member of Congress, most of the country would cheer. If it was a Girl Scout visiting the White House, probably not so much.

“If an injury were done, that could be very bad, but I think, depending who the president is, that a limited amount of misbehavior can be construed as charming,” Wynne said.

(Andrew Jackson had a grey parrot named Polly who swore like a sailor.)

If a president is unpopular, getting a dog can help, Wynne said.

“My understanding is that (Jimmy Carter’s) lack of popularity came from a perception that he was too soft,” he said. “Probably getting a dog would not have been the right move. … He’s the kind of person who would have done well with a German shepherd, something, you know, something that projects a certain strength and potential for action and so on.”

In the interest of fairness, let not cats be forgotten. The Bidens announced a week ago they are also bringing a cat to the White House. (Name and breed have not yet been announced.) Time to put sticky tape on the antiques before the taxpayers’ upholstery bills go through the roof.

There have been many White House cats. Lincoln once remarked of one of his cats, Dixie “is smarter than my whole cabinet.” The most popular White House cat in modern times was Socks, who belonged to the Clintons. Socks ruled the roost until the Clintons got a chocolate lab. 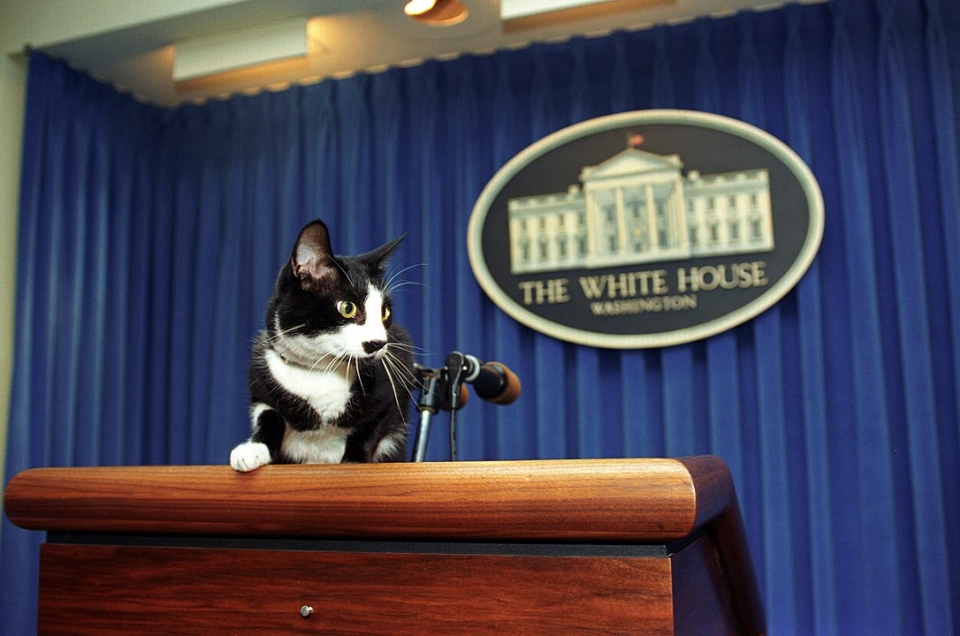 And let’s not forget the ability of a presidential pet to make news itself.

Famed muckraker Jacob Riis wrote about Teddy Roosevelt’s cat Slippers (so named because he was polydactyl). Slippers often disappeared for days at a time, but he always showed up at the White House whenever a state dinner was about to happen. The press corps came to count on it. “When he saw Slippers sunning himself on the front steps, that was enough,” Riis wrote. “The cards were out.”

After one state banquet Roosevelt escorted an ambassador’s wife to the East Room, at the head of a procession of dignitaries, plenipotentiaries and ministers. The procession came to a halt at Slippers, stretched full-length across the middle of the corridor. Roosevelt’s first instinct was to pick Slippers up, but a shudder from the lady on his arm warned him she was not a cat lover. Roosevelt did the next best thing, which was to lead the entire throng around Slippers. “The representatives of … all the great empires and little kingdoms clear down to the last on the long list followed suit, paying their respects to Slippers,” Riis wrote. 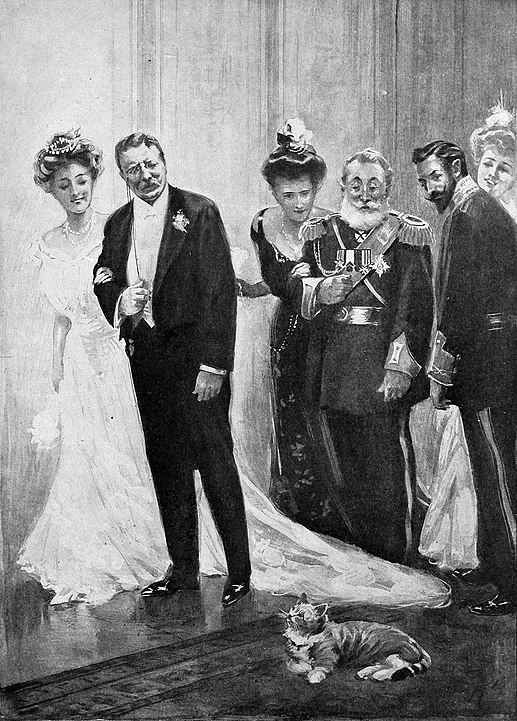 Should Pingtan Marine Enterprise Ltd (PME) be in Your Portfolio? – InvestorsObserver

Senior-focused emporia S4 smartphone launches in partnership with An Post –...