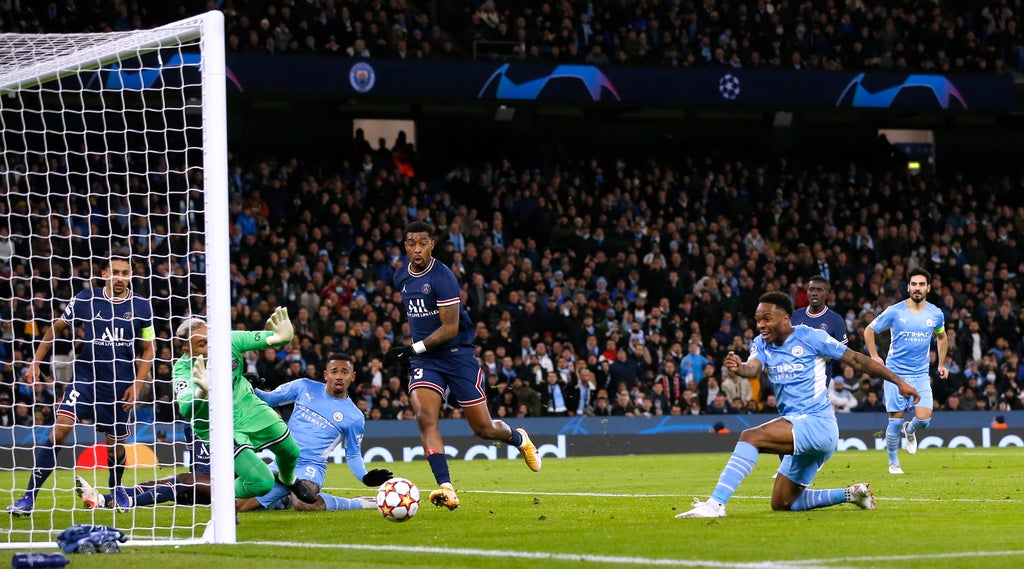 Follow all the action as Manchester City host Paris Saint-Germain in a decisive Champions League fixture that will likely decide who finishes top of Group A.

Pep Guardiola’s side currently sit in pole position in the group on nine points – one clear of PSG on eight – and can guarantee themselves of top spot if they defeat the French giants tonight. Man City did suffer a 2-0 defeat in the reverse fixture, though, when Lionel Messi finally got off the mark in Paris with a stunning solo goal. City cruised past Everton in style last weekend but will have to once again make do without Kevin De Bruyne, who has tested positive for Covid-19.

PSG’s preparations for the fixture have been somewhat overshadowed by the constant speculation linking manager Mauricio Pochettino to the Manchester United job. The Argentine is believed to be United’s first choice to succeed Ole Gunnar Solskjaer but insisted repeatedly at his pre-match press conference that he is “so happy” in Paris. PSG were held to a 2-2 draw by RB Leipzig last time out in Europe and must take all three points tonight in order to top the group heading into the final round of games. Follow all the latest updates below.

82 mins: Into the last 10 minutes now. Man City have the advantage but Paris have seen more of the ball since they’ve gone behind.

Jesus attempts to play Sterling into the box but Marquinhos wins the ball and PSG sweep forward. It comes up to Messi but City’s defenders are on top of him immediately and he’s dispossessed.

79 mins: Joao Cancelo picks up a harsh yellow card after sliding into a challenge on Messi. Cancelo clearly wins the ball but can’t stop his slide and connects with Messi who flips over the Man City defender rather theatrically.

76 mins: City have come from behind to lead against PSG! This is another great move from Man City. Mahrez brings the ball down the right side before coming inside. He flicks a diagonal ball to the far post where Bernardo Silva controls a first time pass to set up Gabriel Jesus. Jesus waits for the goalkeeper to move and then side-foots his finish to Navas’ left. Calm, cool, collected stuff from the Premier League champions.

75 mins: Chance! Massive chance for PSG to take the lead again. Messi gives the ball to Neymar who weaves around Rodri before a one-two with Di Maria takes him into the box. He shifts away from Dias, gets one-on-one with Ederson and belts his effort wide of the near post!

72 mins: How crucial will this goal from Raheem Sterling prove to be?

69 mins: Nuno Mendes and Idrissa Gueye are both taken off by Mauricio Pochettino with Angel di Maria and Junior Dina Ebimbe brought on.

Bernardo Silva slips the ball into the box for Sterling who shifts away from Marquinhos to open up sapce to shoot. The Paris centre-back sticks with him though and takes the ball when Sterling attempts to cut back onto his right foot.

66 mins: The noise level inside the Etihad has been ramped up a bit since that equaliser. Sterling has the ball out on the left side and gives it to Cancelo. He tries to pick out Jesus in the area but Kimpembe heads it clear. The clearance comes to Rodri in midfield and he sends the ball back in winning a corner for the home side.

63 mins: Game on! It’s a beautifully worked goal from Man City. Walker makes a run in behind the PSG backline from deep and meets the ball after Rodri lifts it over the top from just outside the box. Walker cuts it back into the middle, there’s a deflection off Jesus and Sterling pokes it home at the back post! City are level. It’s no more than they deserve really.

61 mins: Save! City play the free kick short and give the ball to Mahrez. He takes it into the box from the right and hits one at goal only for Navas to palm it away from close range!

59 mins: It’s getting a little heated out there as Herrera goes down and Man City elect to play on. They send the ball into the six-yard box and Marquinhos pokes it out for a corner. Herrera is down again and has to go off, Danilo replaces him for PSG.