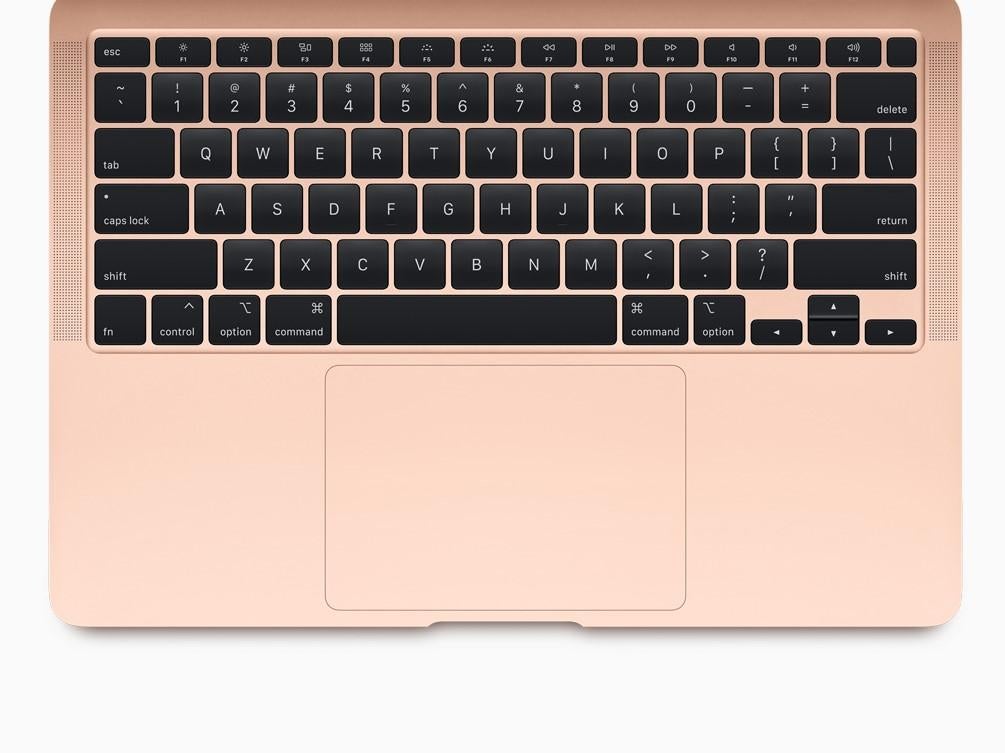 Apple has just revealed a new MacBook Air. It looks outwardly near-identical to the current model, but it offers better value, increased storage and faster performance. But even these things are not the game-changer: that’s the new keyboard.

The pricing first: where the previous MacBook Air, on sale until just days ago, cost £1,099 and came with 128GB of internal storage, the entry-level Air is now £100 less, £999, and has 256GB of storage. There’s also a 512GB model available, with a faster processor, for £1,299. There are still lots of laptops out there for much less money, but this price represents good value. Note that Apple has education pricing for those in class as students or teachers, so it’s possible to get that price even lower if you qualify.

The look is the same as before: sleek and classy. It comes in three colours, silver, space grey and gold. The space grey is the best: solid and businesslike without looking boring, though the gold, warm with a peachy hint to it, is also a head-turner.

The build quality of the MacBook Air is exceptional, an all-aluminium casing that’s sculpted to the slimmest of edges to make it easy to pick up. Like all MacBooks, and unlike many other laptops, you can open it with one hand, the build is so perfectly balanced. Other machines require a finger to hold down the keyboard as you open the lid or the whole thing swings up as it opens.

This MacBook Air continues to have a power button with Touch ID built in – a fingerprint scanner that ensures your computer screen locks when you’re away from it and only unlocks to your finger. Apple Watch wearers can also use their smart timepiece to unlock the MacBook Air, which is cool. Both mechanisms feel intimate and secure.

The large glass trackpad, as before, is smooth and responsive, recognising multiple touches to navigate between windows, scroll through documents and so on.

Like every other current Mac laptop, there are only two kinds of socket: a headphone jack and Thunderbolt USB-C for power or to connect accessories. The Air has two Thunderbolt USB-C ports. For other connections, such as USB-A, you’ll need an adaptor. That’s not always convenient, though it gets easier all the time as more accessories switch to USB-C, and it helps to keep the Air thin.

The MacBook Air has been preposterously slim and light since it was first unveiled by Steve Jobs in 2008 when the then-CEO slid it out of an envelope to an admiring crowd. It was so much thinner and lighter than the competition that it drew gasps of excitement. Over the next decade it slipped behind, especially in terms of the screen resolution, though that’s been fixed. Now, the 13in display is bright, rich and superbly high-resolution.

And then there’s the new keyboard. Apple keyboards were traditionally outstanding, using a scissor-switch mechanism, with lots of travel and a great feel. Then, a few years ago, Apple changed to a whole new system, using a butterfly mechanism. The first-generation of this was quite noisy, but this was overcome in subsequent versions. But then, problems arose which led to keyboards being replaced as users complained that there wasn’t the same reliability.

Last year, on the MacBook Pro 16in, Apple introduced the Magic Keyboard – a name taken from its desktop wireless keyboard – which changed everything. The new keys were quieter, more stable and had more travel – a full 1mm. That’s not quite as much as the keys moved before the butterfly landed, when it was 1.2mm. But it was enough, and it was a revelation.

It’s the same here. Using the new keyboard subtly transforms the typing experience. It’s not that the butterfly keys were bad: unless they failed, they worked well and were comfortable to use.

But as soon as you use the new Magic Keyboard, you recognise how comfortable and inviting it is. The downside is it’s quite hard to go back. Having typed this review on the MacBook Air keys, I picked up a previous Air to make a comparison. As soon as I started typing, my fingers told me I was missing the new experience. The keys on the old Air, which I had used happily before, just couldn’t match the luxurious and satisfying feel of the new one. The gentle scoop on the top of each key that helps your fingers find the right place to touch, the crisper individual backlighting to make typing in a less bright room a breeze and the clearer lettering on each key – all of which are small, subtle improvements that Apple has made with the Magic Keyboard – add up to something big.

The processor has been improved on the latest models with a 1.1GHz dual-core Core i3 processor on the £999 model and a 1.1GHz quad-core Core i5 chip on the £1,299 version.

In practical terms, this means that the Air is a real performer. Not that it was a slouch before, but it handles tasks easily. It’s true, the MacBook Pro is still the go-to laptop for those doing advanced video processing or running other power-hungry programs. But the Air is now very fast and effective. To the extent that many customers may ask whether they really need to spend £1,299 on the entry-level 13in MacBook Pro rather than a £999 MacBook Air that isn’t that far off. Sure, there are other extras in the Pro range, like the spiffy Touch Bar instead of function keys, and four Thunderbolt USB-C sockets instead of two on the Air, for instance.

Battery life on the MacBook Air is exemplary: it just goes on and on all day where other laptops, including some MacBook Pro models, don’t last as long. It’s so good that you may not even think about checking how much charge is left in the battery. It gives a great feeling of peace of mind.

The new MacBook Air is available for order now, with deliveries starting next week. It represents a big step forward for the super-slim Apple laptop, combining sumptuous good looks with real performance and, above all, an unbeatably appealing keyboard.

Lyft to require passengers and drivers to wear masks

The Vindication of Michael Flynn

Uber says 'no sacred cows' as it faces crisis

Who Should Lead the Virus Fight?

Zoom pushes ahead on security, buying Keybase and reaching pact with New York