Shanghai (Gasgoo)- There were 1,687,113 consumers in China taking delivery of the locally-produced PVs (including car, SUVs, MPVs and minibuses) in June, a year-on-year decrease of 6.1%, according to the China Passenger Car Association (CPCA). However, luxury brands still defied the overall downward trend with their deliveries jumping 27% from a year ago to 246,236 units, versus the 5.1% and 17.3% decline in the sales of mainstream JV brands and China’s self-owned brands.

Regarding the year-to-date performance, luxury brands still outpaced the overall market and moved ahead of the other two sectors. Retailing 1,053,442 units in total, premium brands just posted a slight growth of 0.6%, while the overall market, mainstream JV brands and China’s indigenous brands saw their deliveries slid 22.4%, 20.7% and 31.2% respectively. 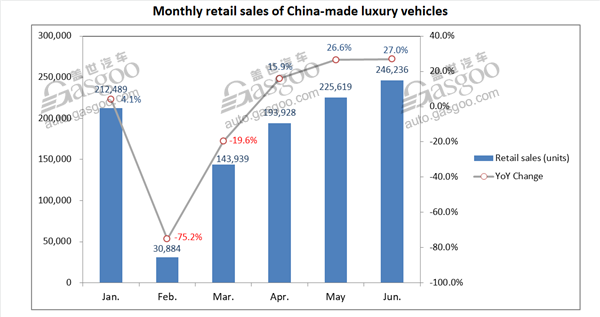 As for this year’s monthly sales, luxury vehicle sector only recorded sales drop in February and March, where none of the sectors dodged the heavy hit cast by the COVID-19 pandemic. As the pandemic was ebbing, the retail sales of luxury vehicles have been mounting up month by month from April to June.

Let’s take a look at how specific models performed. The CPCA’s data show that there were five premium car models—the Audi A6, the Mercedes-Benz E-Class, C-Class, the BMW 5 Series, the Audi A4— whose respective deliveries all exceeded 10,000 units in June. Notably, the occupants of the first three places all posted robust year-on-year growth of over 20%.

Within the premium SUV unit, the Germany’s Big Three all took one spot on the top 3 list by June retails and none of them failed to surpass the 10,000-unit threshold.

The blooming growth in premium vehicle sales might be linked to various incentives the central and local governments rolled out to spur auto consumption badly bruised by the coronavirus pandemic.

In February, Foshan, a prefecture-level city in central Guangdong Province, became China’s first one that launched detailed policies in 2020 to boost automobile shopping, including affording buyers with subsidies worth 2,000 yuan ($287) to 5,000 yuan ($717) per vehicle. Then, Guangdong provincial government clearly noted that cities like Guangzhou and Shenzhen would be encouraged to further ease the restriction on releasing license plates.

From then on, Beijing, Shanghai, Tianjin, Chongqing, Hebei, Shandong, Sichuan, Jilin and other regions all rolled out their policies to speed up the auto sales recovery.

Cui Dongshu, secretary general of the CPCA, said the growth in luxury brands’ sales made a significant contribution to the rebound of the overall auto market. Partially thanks to the upward movement in luxury vehicle sales, China’s PV market gained this year’s first-time year-on-year increase in May. Besides, the 27% growth and roughly 14% of market share reflect an increasingly greater contribution luxury vehicles offered to the overall market. The stimulus effects and consumers’ car shopping desire have been better conveyed in the luxury auto market.

Aside from the policy reason, other factors associated with the phenomenon perhaps include consumers’ preference for upscale models in auto replacement and the sales promotion offered by luxury car dealers.

China’s motor vehicle population reached roughly 360 million units by the end of June 2020, of which 270 million units are automobiles, according to China’s the Ministry of Public Security. With the vehicle parc climbing in the country, the demands from the consumers who want to replace old cars or buy more cars are creeping up as well. 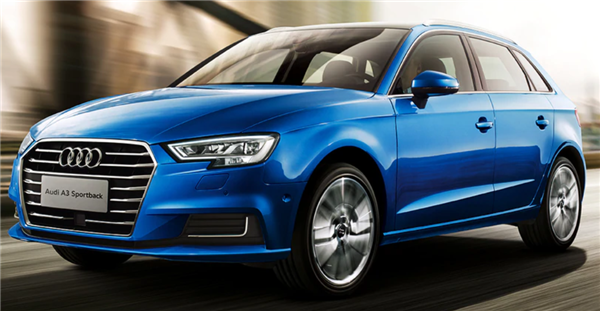 At the same time, it is becoming easier for users to get a luxury vehicle as automakers have added some entry-level models priced at around 200,000 yuan ($28,673) to their product lineups. For instance, BMW launched the base version of the 1 Series priced at 231,800 yuan ($33,232) and the starting price of the Audi A3 stands at only 193,200 yuan ($27,698). Meanwhile, the growing penetration rate of auto finance & loans are favorable to the market expansion of premium cars.

Compared to the so-called first-tier brands (Audi, BMW and Mercedes-Benz), the second-tiers even acted more aggressively. After using discounts, a consumer can pay less than 250,000 yuan ($35,840) to drive a Volvo S60, Cadillac CT4 or CT5 home.

The likes of Jaguar, Lincoln, Acura and Infiniti have all provided generous discounts.

The rise in premium vehicle sales and market share portends that the share of JV brands and Chinese self-owned brands have been further encroached. On the other hand, the current incentives mainly focus on spurring the demands of auto replacement, so that the needs of car-free consumers are somewhat downplayed. Some industry insiders suggest that the government should make more efforts to prompt car-free consumers to buy their first car by means of such measures as lowering the purchase tax on vehicles with low displacement, and boosting the demands of rural residents. It is of great significance to expand domestic auto sales and maintain a sustainable consumption.

Gasgoo not only offers timely news and profound insight about China auto industry, but also help with business connection and expansion for suppliers and purchasers via multiple channels and methods. Buyer service: buyer-support@gasgoo.com   Seller Service: seller-support@gasgoo.com

All Rights Reserved. Do not reproduce, copy and use the editorial content without permission. Contact us: autonews@gasgoo.com.

A new framework to increase the diversity and number of engineers

VW promotes its new £30.000 ID.3 electric car with billboards that EAT pollution – This is Money

The 28 Electric Cars We're Most Excited to Drive in the Next 3 Years – gearpatrol.com

Motorola, Samsung, LG and Sony smartphones are on sale at Amazon...

Poor latency could be a major issue for video conferencing and...