Looking back at 2022: Favorite hardware, software, and features – AppleInsider 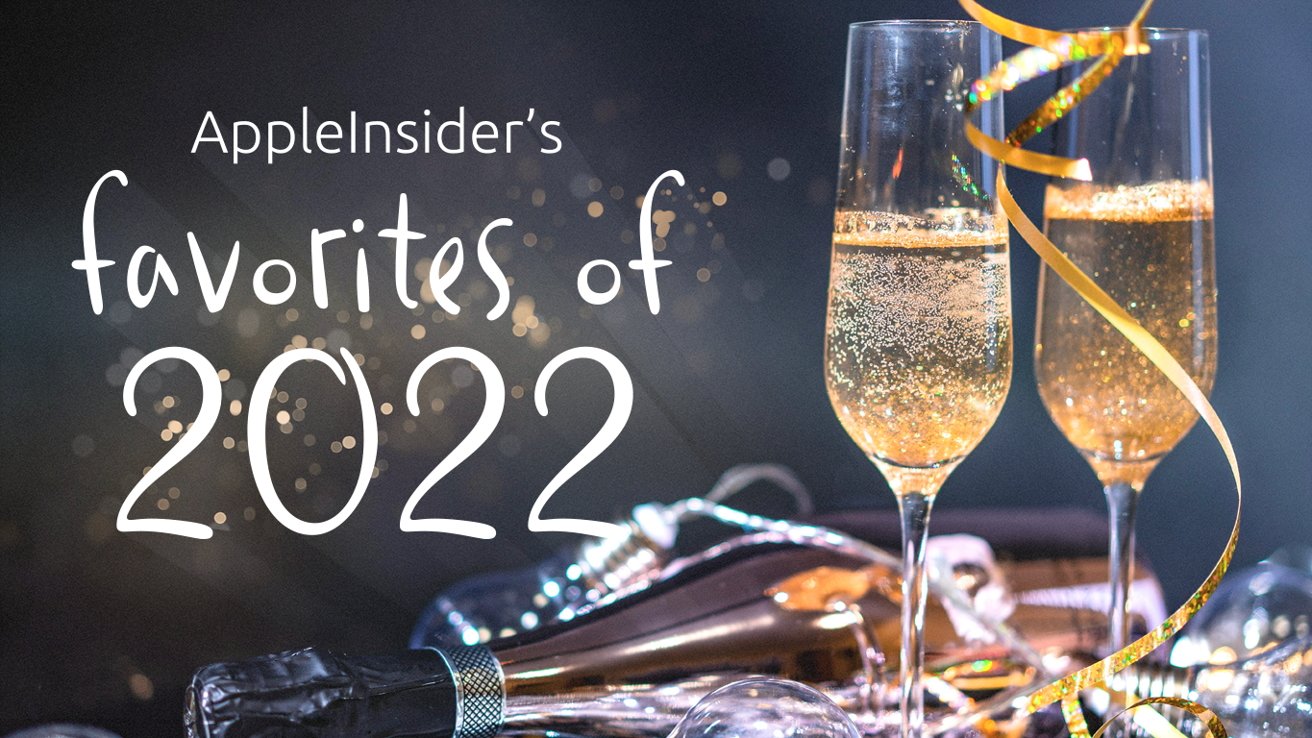 It’s been a long year, and we’ve seen it all. Our editorial staff shares their favorite gear, software, and features released over the course of 2022.

Lots of new things are released every year, and this year was no different. There was the new Mac Studio, a new iPad Pro lineup, and more Apple-compatible accessories than you can shake a stick at. Here’s what we thought was worth a second glance.

In what feels like a whole lifetime ago, I had the privilege of reviewing the Mac Studio for us. At the time, I said that while my own computing needs have changed over the years, I was glad for my engineering folks that needed the power.

“But, periodically, outside of my time at AppleInsider, I’m presented with that massive database, a confounding fluid flow problem, some kind of weird stoichiometry math, or those images again, and I’m asked to help,” I said. “I don’t personally need a computer that can crunch them in real-time, but I’m glad the folks that I’ll work with have that option while running macOS at the same time. And, I’m pretty sure AppleInsider’s multimedia team appreciate theirs now.”

Turns out, very shortly after I wrote this, I picked up some short-term work that I absolutely needed the power. So, I got one.

Calculations that were taking an hour on my M1 Max MacBook Pro and over two hours on a colleague’s $6000 Intel Mac Pro configuration, took 13 minutes or so on the higher-end M1 Ultra Mac Studio. A fixed-fee job got done in 1/5 the time, so time was literally money.

It’s still not for everyone. As I write this, it waits for the next big job. It is doing my home server duties, and a child is playing Disney’s Dreamlight Valley on it.

It isn’t feeling a thing processor-wise, I can’t hear the fan, and it’s drawing all of 45W doing it. The RAID attached to it is drawing twice that. When the Intel Mac Pro did the job, the computer itself was drawing 655 watts.

It doesn’t get any better than this. Well, maybe until the Mac Pro ships, but we’ll see how much that costs. And, the M1 Ultra Mac Studio may do what I need it to do.

Growing up in primarily ultra-rural locations, there was always a very real fear of getting stranded somewhere without being able to get help.

When I was six, our minivan sputtered to a stop at the bottom of an icy hill on a western Pennsylvania dirt road. My mother and I were stranded three from the nearest living person and the sun had already begun to set. We had no choice but to walk three miles to my grandparents’ house to get help.

When I was barely 20, a blown-out tire in a sleet storm sent me spinning off-road and over an embankment in the Black Hills region of South Dakota. After climbing out of the car and up over the hill, I had to hope that someone would be driving in the terrible weather and rescue me. An hour later, someone finally did.

Both times I made it out okay, but they were very real reminders that it only takes one thing going wrong before a situation can become potentially life or death.

Giving iPhone owners the ability to call for help when they don’t have service is an incredible tool. There are still huge pockets of land where there is no cell signal blanketing the region I live in.

If an iPhone 14 can save even one life, I think the feature is worth it, but I’m willing to bet we’re going to hear plenty about it going forward.

Apple released a lot of amazing hardware in 2022, but my top pick has to be the AirPods Pro 2. The iPhone 14 Pro Max is amazing with its new cameras, the Studio Display finally gave us a new Apple-made monitor, and I even got my first ever e-bike — but AirPods Pro 2 made the biggest impact.

Apple’s AirPods are now six years old, and I can say confidently that they are my most used Apple product by far. I spend hours every day with at least one earbud in my ear, listening to podcasts or music. They changed how I think about audio.

My day-one set of the original AirPods Pro were beginning to show their age just as Apple finally announced the second generation. Somehow, these improved on the first in nearly every aspect.

The audio is noticeably better, ANC works twice as well, and the new Adaptive Transparency is like augmented reality for your ears. I can’t imagine not having them, which is why they are my top pick for 2022.

While I can certainly expect that most of my colleagues will go for products, my choice is something oddly specific. The release of the software feature in iOS 16 and macOS Ventura called Continuity Camera.

The feature takes advantage of the high-quality cameras on an iPhone and uses it as a wireless webcam for your Mac. This means you have a webcam on hand, with easy reach, and one that could even be moved around since you don’t need to connect a cable.

During the pandemic, webcams were a necessity, but while technology improved a bit at the high end, quality continues to be a problem, even today. And yes, you could use a DSLR or mirrorless camera as a webcam if you want, but not everyone wants to have a thousand-dollar imaging device used half the time as a webcam.

Continuity Camera is great for at-a-pinch situations and really should’ve been introduced two years earlier, for the sake of everyone.

My absolute favorite new release in 2022 is Hookmark for Mac. I’d used its previous incarnation as Hook back in 2021 and that was good, but somehow with the new features, plus the relaunch, rebrand and now being available on Setapp, Hookmark has become revolutionary.

That’s a pretty hyperbolic word to use, but for once it’s accurate. There’s the way I used to work before using Hookmark, and now there’s the completely different way I work since.

Or when editing a magazine, I have article submissions, rejection emails, notes from the client, spreadsheets, the magazine’s online content management system, the Affinity Publisher document, and multiple folders. With a keystroke, I am jumping between any and all of them, immediately.

Luc Beaudoin, the developer, would tell you that it’s not that going to find that right folder or that right email is difficult or even time-consuming, but it is enough to interrupt your thinking. I know he’d tell you that because he told me: I loved the app so much I interviewed him at length for my 58keys YouTube channel.

Hookmark is now available on Setapp, the subscription service that includes over 200 Mac and iOS apps. It’s also available directly from the official site, where there’s a trial version, and the basic edition then costs $29.99

Although Apple only released it in early December, Advanced Data Protection is already my favorite thing of the year.

In later software versions, Apple will release Security keys and iMessage verification in 2023.

With the optional iMessage Contact Key Verification, users who enable it will get alerted if its servers ever got breached and inserted an intermediary between iMessage communications. Security Keys for Apple ID let users expand their account two-factor authentication with a hardware security key.

There were plenty of fun products launching this year that had me excited. The Apple Watch Ultra is incredibly cool and I adore the new GoPro Hero 10 Black. But if I had to pick my favorite, which I clearly do, I’d settle on the Level Lock Plus.

Level Lock Plus was co-developed by Apple and sits cleanly inside your door. It’s entirely unassuming from the outside, mimicking your run-of-the-mill deadbolt. Yet it packs more tech than almost any other smart lock on the market. It can be unlocked via physical keys, with a companion keypad, using the Level app, via Apple Home, with NFC key cards, automatically based on location, or with Apple Key. It’s the last one that has me particularly excited.

The lock works so well, just approach and tap your Apple Watch or iPhone and the lock disengages instantly via NFC. It’s magical how easily it authenticates and provides you access to your home. There was some damaging press around the ability to pick the Level Lock Plus but this is so prominent in the industry it isn’t any different from any lock down the aisles of Home Depot.

Plus, you can still receive alerts that the door was unlocked manually and our doorbell should ward off anyone who wants to try picking the lock.

Right now, this is our go-to lock and one of maybe two on the market that so far supports Apple Home Key. Between its great looks, multitude of entry options, and Home Key support, this is such an easy product to recommend.

Why Apple Stock Was Up on Friday – The Motley Fool