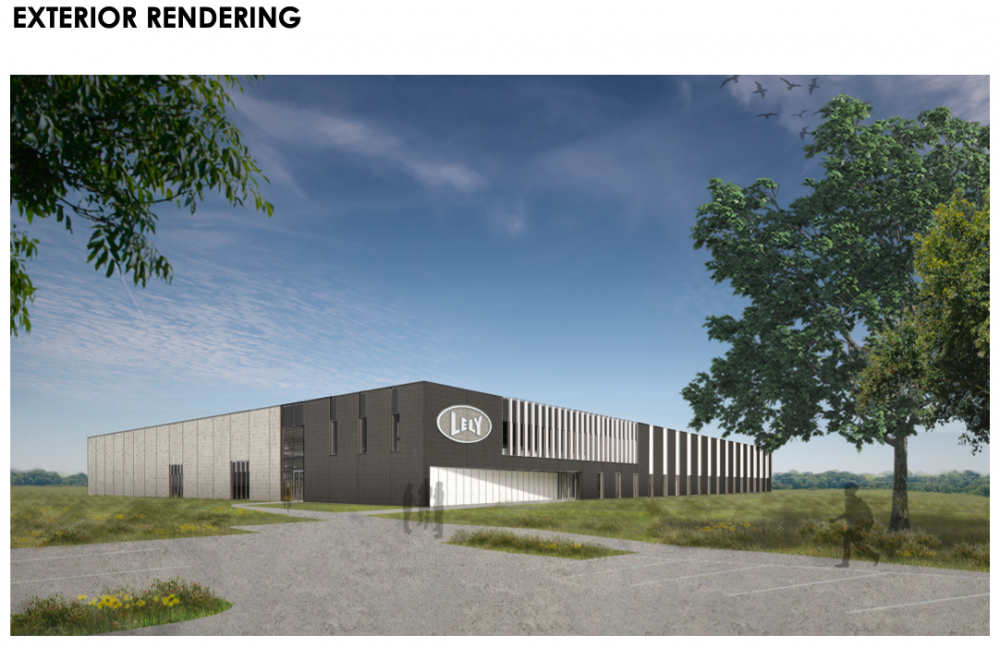 Lely North America Inc., part of a global manufacturer of automated dairy equipment based in the Netherlands, on Thursday celebrated the start of construction of its new headquarters in Pella. Lely officials joined representatives of the Pella City Council, Mayor Don DeWaard, Lt. Gov. Adam Gregg and other guests in a groundbreaking ceremony at the site.

The planned headquarters, which will initially encompass about 100,000 square feet with room for phased expansions, will be built just south of Iowa Highway 163 on 250th Avenue. The total project investment is estimated at between $20 million and $22 million.

Lely Group, founded in 1948 in the Netherlands, develops robotics and data analytics that improve animal welfare, flexibility and production on dairy farms. With this expansion, products currently manufactured in Europe by Lely will now be manufactured in Pella. Lely North America brought production for the United States and Canadian markets to Pella in 2004.

“When we first expanded here in Iowa almost 10 years ago, we made a lot of good assumptions about what we saw for the market opportunity and growth,” said Chad Huyser, CEO of Lely North America. “We’ve actually seen significant growth above our forecasts. So now as we look forward another 10 to 15 years, we anticipate the market adoption of technology and automation around the dairy farm and livestock farming in general is only going to continue to grow.”

Many people outside the dairy industry aren’t aware that tens of thousands of robotic milking machines are already operating globally. The opportunity for new market penetration is significant in North America, where the technology has not as quickly been adopted. Robotics in the dairy industry dates back several decades, he noted.

“This investment is really built around the ideas that not only do we need to take care of the needs that we see today,” Huyser said. “We’re looking at this as a future long-term growth opportunity that gives us flexibility to continue to build out on this campus as the market demands grow.”

“We’re so proud to have a company like Lely here in Iowa,” Gregg said to Lely officials, local employees and other guests gathered under a white canopy at the building site. “It’s a really inspiring story and the kind that we like to tell in Iowa.”

He noted that he recently visited a dairy farmer in Lyon County who had proudly displayed his Lely robotic milking system to him. “It was a good reminder for me, and for all of us, how high-tech modern agriculture is,” Gregg said.

Huyser said the new headquarters facility will be about 2 1/2 times larger than its current facility, which is located just to the north on 250th Avenue.

Designed by Substance Architecture, the facility will anchor what the company will name as “Lely Park,” an environmentally friendly campus that will feature native plantings and water-quality improvement features in partnership with the Iowa Department of Natural Resources. Natural lighting and specially designed entrances will help to connect workers to the outside environment, which will feature a nature trail around the campus. Sustainability is one of Lely’s three pillars of its mission statement, Huyser said.

“We at Lely believe there’s an extremely bright future in agriculture,” he said.

READ  Edmunds: How to shop for a low-tech car - Chattanooga Times Free Press