Kahoot is paying $31 million in cash, plus another $19 million if Drops performs well from 2020 to 2022. It’s a nice payday for the company, which has 25 million users and recently reached a revenue run rate of $10 million.

This year, Tallinn, Estonia-based Drops saw an increase of 7.5 million users. It is forecasted to hit 30 million in total by the end of the year, CEO Daniel Farkas said in a recent interview with GamesBeat.

Oslo, Norway-based Kahoot has a lot of cash since it raised $215 million from SoftBank. More than 200 million games have been played on the Kahoot platform.

Kahoot CEO Eilert Hanoa said in a statement that Drops will be added to the Kahoot platform, which has a game-based approach to learning. The Drops app has 5-minute sessions where you can answer drill questions by swiping in a direction on a smartphone. Vocabulary questions are read out loud, and you have to answer within a time limit. The app recognizes your voice when you answer questions. I played around with it, and it was pretty easy to use. Drops has about 15 minigames.

Kahoot is on a mission to make learning awesome by empowering all educators, teachers, students, and employees to unlock their full learning potential through its learning platform. In the last 12 months, more than one billion participating players in over 200 countries attended over 200 million Kahoot sessions. The acquisition of Drops is part of Kahoot!’s strategy to expand into new areas of learning and make Kahoot a trusted destination for all learners, whether at school, work or home. 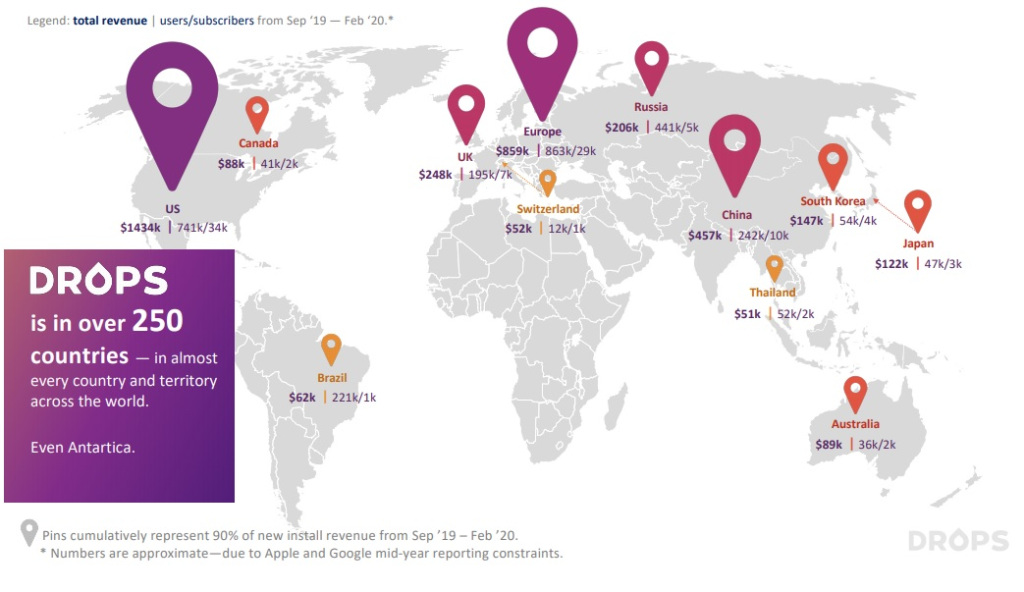 Language learning has exploded due to globalization as well as, more recently, due to the surge in e-learning as businesses and schools adapt to remote learning. As a result, the global digital language learning market size is expected to reach more than $8 billion by 2025.

Kahoot was started in 2013.  Farkas and cofounder Mark Szulyovszky, who started Drops in 2012. Farkas is from Hungary. He learned English and then Spanish and found he enjoyed deconstructing languages.

“I realized that you need to pick up languages in order to have a decent shot at the global marketplace,” he said. “I realized that the foundations of language learning are the core vocabulary and building consistency. Language learning is a marathon, not a sprint. You get confidence by learning the building blocks. I couldn’t find a really good tool to build these foundations.”

So Farkas and Szulyovszky began working on a solution and entered an accelerator for Estonian startups. Mentors for the program came from game companies such as Supercell and Rovio. “They were quite an inspiration,” Farkas said.

The duo spent 18 months on an app they called Learning Visible. It didn’t work.

“The retention was not there,” Farkas said. “It wasn’t sticky enough. People were not using it on a daily basis. We worked on it for one-and-a-half years, and we pulled the plug.”

They started again from scratch. This time, they borrowed from gaming by making the lessons just 5 minutes a day, about the same amount of time people play mobile games like Supercell’s Clash of Clans. They built Drops within six months. After they debuted the game in 2015, Apple featured it in China and it began taking off.

Drops netted more than 900,000 downloads in its first year. It kept growing, and an Android app followed in 2017. The company has grown to about 23 people, and its downloads have accelerated every year.

PS5 restock: Sony Direct is out of stock, here's where to look next

Language is the ‘bare minimum’ of culturalization in game development

With upcoming iOS 14 changes, shifting from waterfall to ad bidding is a no-brainer

Kung-fu varmint RPG Biomutant gets a May release date – PCGamesN

How Jam City views growth for mobile games in 2021

Project 007, the new James Bond game, won't feature any actors from the films