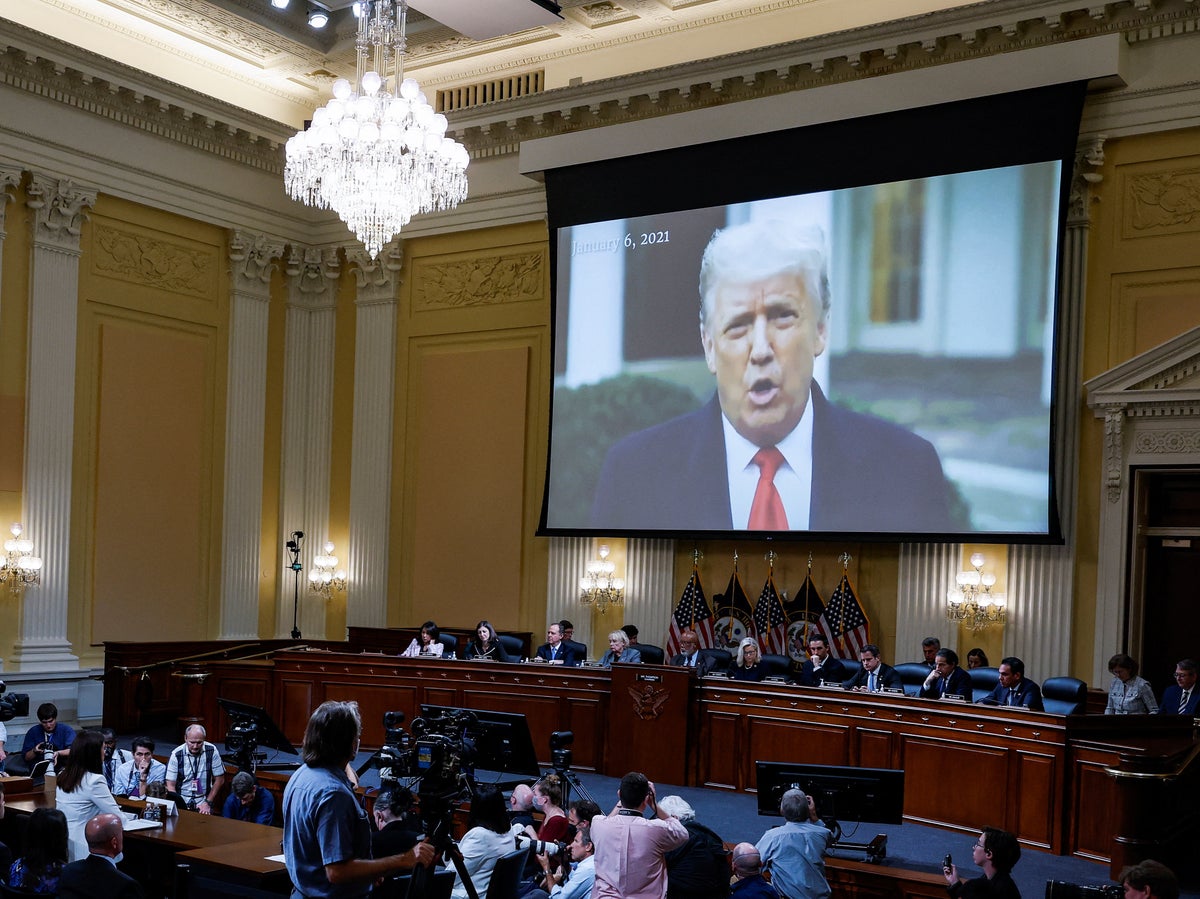 A member of the House committee investigating the 6 January riots of last year at the Capitol has revealed that “more evidence is emerging” that lends support to recent testimonies that established Donald Trump wanted to join an armed mob.

Adam Kinzinger said: “There’s information I can’t say yet.” But he added that “we certainly would say that Cassidy Hutchinson has testified under oath, we find her credible.”

Meanwhile, January 6 committee vice-chair Liz Cheney has rejected the idea that prosecuting a former president would inflame political tensions in America. Looking the other way from potential criminal activity would lead to a “graver” threat, the congresswoman said.

As speculation about shifts in support grows, Mr Trump has lashed out at Ms Hutchinson on Truth Social and in a Newsmax interview. Calling her a “whack job”, Mr Trump questioned whether she had in fact told the truth under oath. He also claimed that she asked for a job when he decamped to Florida when he left office.

Also, it was reported by the New York Times that Mr Trump may announce a 2024 bid for the White House as soon as this month.

The vice-chair of the committee said in an interview with ABC News on Sunday: “We’ll make a decision as a committee about it.”

Ms Cheney told ABC News that “we may well as a committee have a view on that. If you just think about it from the perspective of: What kind of man knows that a mob is armed and sends the mob to attack the Capitol and further incites that mob when his own vice president is under threat?”

Is Hutchinson’s testimony the ‘smoking gun’ that will lead to Trump facing criminal charges?

New testimony before the January 6 committee revealed bombshell after bombshell about what Donald Trump and his closest aides were saying and doing before the violent riot.

Amid anonymously sourced efforts to dispute her testimony, Cassidy Hutchinson is standing by the explosive claims she made before the House January 6 committee.

In a statement released Wednesday, Ms Hutchinson’s attorneys Jody Hunt and William Jordan said the former White House aide “stands by all of the testimony she provided yesterday, under oath, to the Select Committee to Investigate the January 6th Attack on the United States Capitol”.

Read more via Andrew Feinberg below:

A member of the January 6 committee revealed the subject of the committee’s next hearing on Sunday, telling CBS News that he and his colleagues will examine the effort by Donald Trump to lure thousands of his supporters to the US Capitol.

Representative Adam Schiff made the comments on Face the Nation, explaining that “[o]ur very next hearing will be focused on the efforts to assemble that mob” that attacked Congress while the Senate was meeting to certify the results of the 2020 election.

After Cassidy Hutchinson’s explosive testimony, former federal prosecutor Glenn Kirschner believes that the former president will be “indicted” for his role in 6 Jan riots at the Capitol last year.“Guns have been smoking all around Donald Trump for years,” Mr Kirschner said in a video posted on Youtube.

“And for whatever reason, there have been no criminal charges yet brought against Donald Trump. That will change. It has to change if we care about the survival of our democracy. He will be indicted.”

His remarks come after Ms Hutchinson’s testimony in front of the House select committee last week.

Meanwhile, Mr Trump has railed against her and called her a “total phony” and has even denied many of her claims.

A member of the House committee investigating the 6 January riots of last year at the capitol building has revealed that “more evidence is emerging” that lends support to recent testimonies that established Mr Trump wanted to join an armed mob.

“There will be way more information and stay tuned,” said Adam Kinzinger.

“There’s information I can’t say yet. We certainly would say that Cassidy Hutchinson has testified under oath, we find her credible, and anybody that wants to cast disparagements on that, who were firsthand present, should also testify under oath and not through anonymous sources,” he said.

In another interview, another committee member, Democrat Adam Schiff said: “We are following additional leads. I think those leads will lead to new testimony.”

On Truth Social early Sunday, the former president once again lashed out against Cassidy Hutchinson, the January 6 committee witness who revealed a number of bomshells in her recent testimony before the panel.

Mr Trump wrote on Truth Social: “So Cassidy Hutchinson was all set and ready to go to Florida with the Trump Team long after January 6th. She knew I did nothing wrong. She was a big Trump fan – but my people didn’t want her. What happened? Why did she so dramatically change? All lies. I guess even she didn’t believe her own bull.…!”

Filmmaker who upended Jan 6 probe talks Trump ‘aggression’, what he saw, and how the spotlight has led to death threats

Last week, the select committee received hours of video from Mr Holder after he was issued a subpoena calling for “raw footage” taken by him and his colleagues on the day of the Capitol attack. The subpoena also requested footage of interviews with Mr Trump, Mr Pence, Donald Trump Jr, Eric Trump, Ivanka Trump, or Jared Kushner and “any footage pertaining to discussions of election fraud or election integrity surrounding the November 2020 presidential election”.

Adam Kinzinger, one of the Republican members of the House January 6 committee, said that the panel’s additional hearings scheduled for July will reveal new information.

“There will be way more information and stay tuned,” Mr Kinzinger said.

South Dakota governor Kristi Noem, a potential 2024 Republican presidential contender, was pressed on Sunday on whether child rape victims should be forced to carry a pregnancy to term. Reports of a 10-year-old girl from Ohio being forced to travel out of state to access abortion care sparked outrage over the weekend.