Home Windows Is the Surface Laptop Go a better choice than the XPS 13?

The new Surface Laptop Go features the trademark great Surface design and build at a lower price. But that lower price doesn’t come without compromise, though it is a killer feature over even the cheapest XPS 13.

The XPS 13 is generally the best Ultrabook you can buy and became the class leader for a reason. It’s more expensive but packs more inside while maintaining a form factor on par with that of the Surface Laptop Go.

Ordinarily, Surface products would compete directly with the Dell XPS 13, but the Surface Laptop Go is a little different. It’s a budget device that starts at almost half the price of the XPS 13, and that lower entry point isn’t without compromise. The XPS 13 remains the best Ultrabook you can buy, and even though both of these are extremely compact computers, they’re really for different people.

Which should you buy?

The specs list doesn’t tell the whole story, but it does paint a picture of why the Dell is twice the price of the most affordable Surface Laptop Go. Dell is using the latest 11th Gen Intel processors, PCIe SSDs, and Thunderbolt 4 while also having higher resolution displays at every price point.

The Surface Laptop Go only has a single CPU option. Still, it’s commendable that Microsoft has gone for something capable rather than relying on a Core m or even Pentium in this budget notebook. But it could also be partly responsible for other corners having been cut, like a pretty low-resolution display and only eMMC storage and no Windows Hello at all on the entry model.

The Surface Laptop Go is an Ultrabook for mid-range money

And since both are extremely compact laptops, the biggest factor in the decision-making process should be price. If you were leaning towards an XPS 13 anyway and the price tag isn’t an issue, then it’s still going to be the laptop to get. It’s more powerful, has a larger, better-looking display, more up to date connectivity in the form of USB-C and Thunderbolt 4, and it’s still small enough to toss in any bag and travel light.

By contrast, the Surface Laptop Go is for the folks who would love something like an XPS 13 but want something much more affordable. By all accounts, it’s an Ultrabook, and it looks just as classy as the other Surface products. It’s far from perfect and has many compromises, but it’s also an awful lot cheaper than the XPS 13. So the compromises might well be worth it to you. So long as you’re not looking for something to handle more intensive workloads. 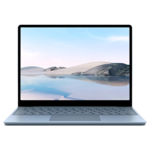 Featuring the same great design as the Surface Laptop 3 but in a smaller chassis and at half the price, the Laptop Go is a solid choice for those looking to get an Ultrabook but for much less money.

An incredible Ultrabook for everyone

The latest update to the ever-popular XPS 13 adds Intel’s 11th Gen processors, pairing great hardware and design with portability and solid battery life. It’s much more expensive, but it’s also much more laptop in so many areas

Knowable offers audio courses from over 200 top experts, and lifetime access is now 75% off