Mobile monetization firm IronSource said its Supersonic Studios division has launched LiveGames, a self-service way for indie game developers to manage mobile games and their live services (such as tournaments or updates).

This is for Supersonic publishing solution, which IronSource launched more than a year ago. The announcement comes after it announced that it plans to go public via a special purpose acquisition company (SPAC) at an $11.1 billion valuation.

The product offers developers who publish their mobile games with Supersonic access to game management and full visibility and transparency into in-game metrics that enable them to better manage and grow their published games.

Nadav Ashkenazy, the general manager of Supersonic Studios, said in an interview with GamesBeat that the goal is to make publishing tools accessible to indie developers so they can get their games off the ground. It helps with the “growth loop,” after a game reaches a large scale and then needs attention in terms of improving numbers, such as the average playtime per user.

“After you scale a game globally, everything gets more complicated,” Ashkenazy said. “For average playtime per user, we give you a snapshot for that.”

The idea is to support developers as independent companies by productizing what is otherwise a manual process. It also adds some important transparency for developers that they normally can’t get out of game publishers, said Omer Kaplan, the chief revenue officer at IronSource, in an interview with GamesBeat.

“Historically, publishing is a black box,” Kaplan said. “A developer’s game meets retention goals. Then a publisher handles growth and gives a revenue share. We make everything transparent. We have complete transparency for the developers using our publishing solution on the IronSource platform.”

Several rival products in the market help developers test the performance and marketability of their prototypes, with IronSource launching its self-serve testing product for Supersonic developers in 2020. However, one of the biggest challenges comes once a game has been published, since many of the insights relating to a game and its performance are not commonly visible to the developer, limiting the ability to understand, test, iterate and improve for the long term. 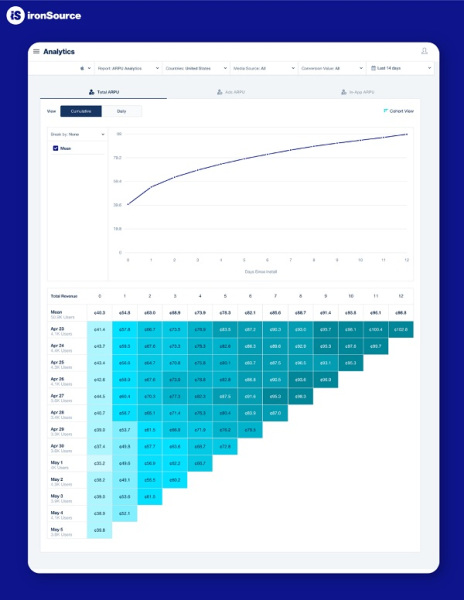 With Supersonic, IronSource has focused on helping game companies become better developers, rather than treat each game as a standalone unit.

Through LiveGames, developers will have access to data such as daily, monthly, and annual profit for each of their published games; advanced analytics including retention, playtime, lifetime value, and ad engagement for each region and user acquisition channel; rewarded video and interstitial ad analysis; and advanced analytics from A/B tests for test comparison.

Stan Mettra, the CEO of game studio Born2play, is using LiveGames with the game StackyDash. He said in a statement this is the first time the company has so many insights into the performance of the game. That helps take away blind spots and helps the company take steps to increase revenue. About 25 studios used the LiveGames service in alpha testing and they’re now ready to start using the product.

Tel Aviv, Israel-based IronSource has previously said it would raise $2.3 billion in cash proceeds for both shareholders and the company itself through the transactions, which includes both the proceeds from the SPAC (a faster way of going public compared to an initial public offering) and an additional private investment known as a PIPE, or private investment in a public equity. SPACs have become a popular way for fast-moving companies to go public without all the hassle of a traditional IPO. Regulators have come up with more rules to govern SPACs, but the idea is to raise money faster.

IronSource said it recorded 2020 revenue of $332 million and adjusted earnings before interest, taxes, depreciation, and amortization (EBITDA) of $104 million. IronSource said its monetization platform is designed to enable any app or game developer to turn their app into a scalable, successful business by helping them to monetize and analyze their app and grow and engage their users through multiple channels, including unique on-device distribution through partnerships with telecom operators such as Orange and a device makers such as Samsung.

Which Apple Watch should you buy on Prime Day?

Verizon pitches gamers on the 5G future and inclusion

Transformers: Heavy Metal is a real-world AR mobile game from Niantic and Hasbro

Should Big Tech pay you for your data? It’s possible, but also problematic

The Future Of The Sports Betting Industry In The World