“It’s my ambition to eventually not be known as the artist formerly known as Prince,” jokes Mark Logan, who is most often still referred to as the former COO of Skyscanner, even though he left the flight bookings company in 2017.

Since then he has embarked on a new phase of his career, still involving startups and scaleups but using his knowledge and experience to help a wider range of companies in the tech sector.

This includes non-exec roles with TravelNest, Swipii and The Data Lab and running his own consultancy, where he works with up to ten companies at a time.

He is also creating a new course in startup growth engineering for computer science students at Glasgow University.

The idea is to give them the kind of training that students at Stanford get into how to build and grow a startup so they leave “founder ready”.

“I think it’s really important that those of us who have had those experiences, we reinvest them into the ecosystem, because that’s one of the characteristics of a vibrant and growing ecosystem that talent and experience recirculates,” says Logan.

“And I’m minded to think about when Skyscanner was growing it would have been wonderful for us if we could have stepped out of the office over in Edinburgh and walked down the street and asked Facebook or Twitter or Uber what their playbook was when you reach 500 people.

“But we couldn’t do that, so we had to work a lot harder to access that type of knowledge.”

Logan has also been appointed by the Scottish Government to lead a short-life review into how the tech sector can contribute to Scotland’s economic recovery after COVID-19 and it is this idea of building a strong ecosystem that is the focus of that too.

He notes that there are many parts of the Scottish economy that are important, but one of the particular attributes of the tech sector is the potential for exponential growth.

He explains: “The example I particularly think of here is, if you were to go back to the Silicon Valley in the 1960s, it was primarily an exporter of apricots and oranges. It was a big orchard.

“And for many decades now, it’s been the fifth or sixth largest economy on earth, if it was a country, and that’s because it regularly produces these exponential companies.”

His starting point for the review is identifying where they want to get to. “If we try to define what do we mean by tech ecosystem or what we’re trying to optimise for, if you like, then the output of the tech ecosystem should be a constant stream of successfully scaled-up large tech companies that employ a lot of people and bring a lot of revenue and companies of all sizes in between up to that point.

“And the goal of improving the ecosystem is can we increase that rate of success? For example, we’ve had FanDuel and Skyscanner in the last 10, 15 years. Frankly, I think we can do better than that.”

After that, the review will look at what support is needed to achieve that aim. Logan stresses that this is not all financial and outlines three areas in need of development: education, infrastructure and funding.

“The first is education, and by education I don’t just mean create more children who can programme, which is important for sure, I’m also talking about how do our founders and our startups get the same level of exposure to world-class growth techniques that are commonplace in Silicon Valley, for example, so how do we get those skills embedded earlier and more success.

“Then there’s infrastructure, which for me is obviously the incubator spaces that are important, but it’s also creating those social infrastructure elements, those market squares where people can come together to meet, exchange ideas, learn, so we create a sense of identity in the tech community. 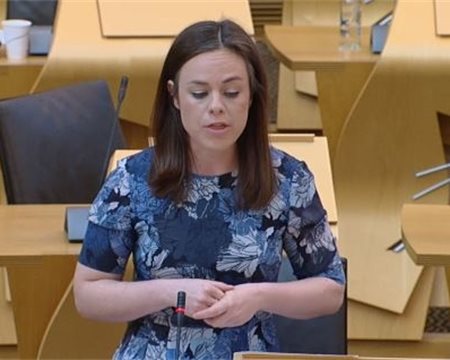 “And we see examples of that emerging, especially in Edinburgh, but we could do better there.

“And then finally, it’s looking at funding aspects and can we do a better job there. I think the really important element here is that I would consider there’s two types of ecosystem.

“There’s those that have passed a critical mass tipping point where they can essentially take care of themselves and they benefit from virtuous network effects [and those that haven’t] … We haven’t reached ours yet.

“So therefore, we have to think about … what help can we give to accelerate the ecosystem to that tipping point, after which we can taper back that support.”

What Logan is describing sounds like a general review of how to grow the tech sector in Scotland rather than a specific response to the coronavirus crisis, but he explains why those should be considered one and the same thing.

Logan says: “We would be blind to ignore the fact that we have this unprecedented situation in front of us, but if you think about the sequence here, phase one is the crisis we’re currently in.

“And government and other bodies are of course looking at interventions and support that we can give to not just tech startups but beyond.

“Phase two, you might call recovery and convalescence, how we help those companies get back on their feet and wean them off life support, if that’s what they’re on.

“And then phase three, I would call strategic. So, if COVID had never happened, what should we have been doing that we weren’t doing to make the ecosystem work better.

“And my review is very much centred on phase three … And in that regard, I really applaud the Scottish Government’s vision here … I’m very impressed that that the government’s lifting its head away from [the crisis] and looking a bit ahead and saying, after this, how do we give ourselves the best chance to recover and grow.”

Google's Pixel 5 Is Made of Recycled Aluminum and Ideas: Review – BNN

Census says deadline can be reached with tech, nonstop work – The Herald Review

Long-lost Resurrection tectonic plate that formed 60 MILLION years may be...