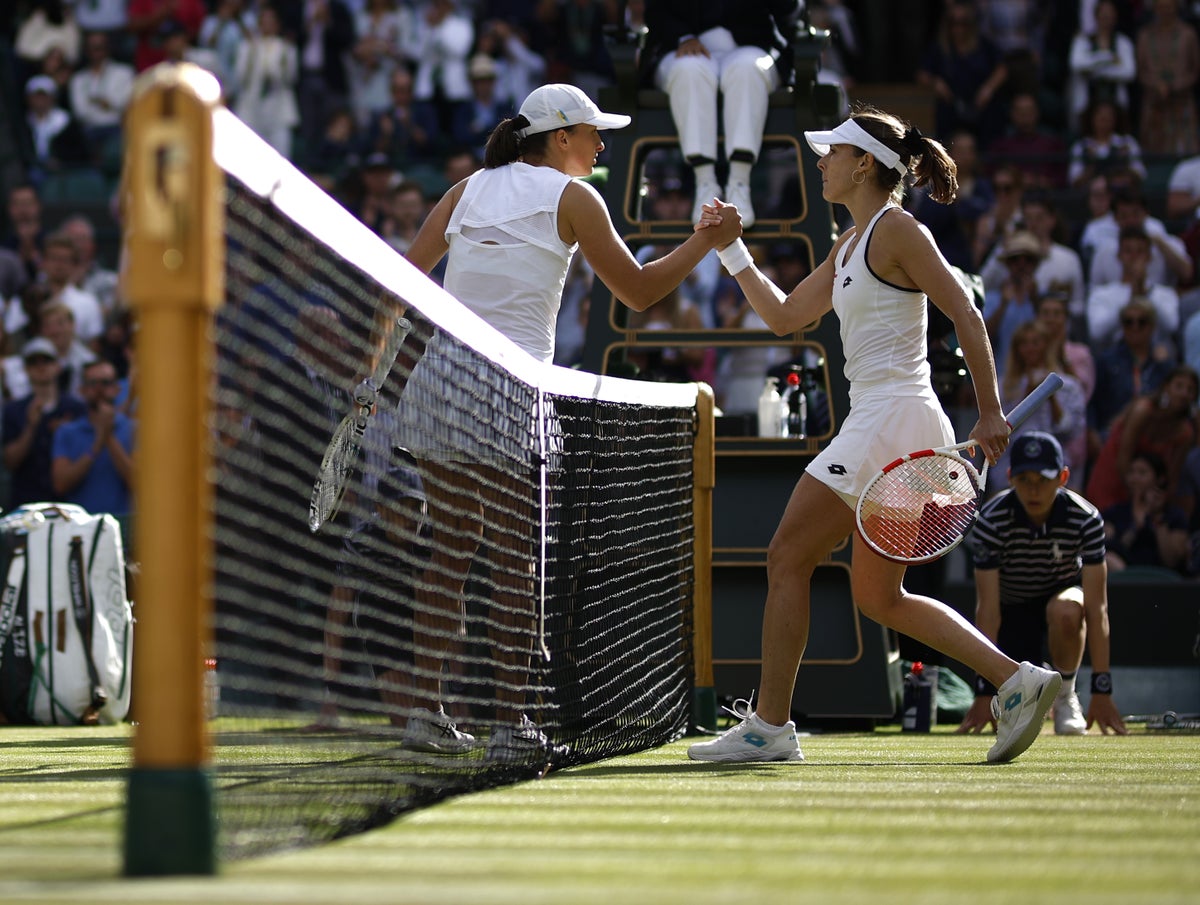 Iga Swiatek is out of Wimbledon and in truth it had been coming. The World No 1’s dominant streak at the top of the game comes to an end at 37 matches, as Alize Cornet seized the opportunity and exploited Swiatek’s hesitancy on the grass courts of SW19. Swiatek’s arrival at the All England Club came with the warning that she had yet to settle onto the surface and the 21-year-old had been a different player this week to the one who had conquered all before her on the clay at the French Open last month.

For Cornet, the 6-4 6-2 victory sealed another upset over a World No 1 at Wimbledon, eight years on from stunning Serena Williams in a match that also took place on Court No 1. Cornet was a problematic opponent for Swiatek from the start and revealed that she had taken confidence from the Pole’s struggles in the early matches against Jana Fett and Lesley Pattinama Kerkhove. “I knew I could do it,” Cornet admitted. “If there was ever a moment to beat her, it was now on grass.”

By defeating Swiatek, Cornet has achieved what the rest of the women’s game has been attempting for the past four months. Swiatek’s winning run was the longest on the WTA Tour in over 30 years but an error-strewn performance and the defence of Cornet was her undoing. Swiatek made 33 unforced errors throughout the match, including key misses from close range at the net as Cornet went on to take second.

In the end, the  37-win streak was ended by a player ranked 37 in the world and it is by far the biggest shock of Wimbledon so far. Cornet is an alert, committed baseline hitter and her diligence at the back of the court forced Swiatek to swing for winners that she was not comfortable attempting.

The Frenchwoman raced into an early lead with two quick breaks of serve, with the Swiatek groundstrokes misfiring wildly from the off. Although Swiatek came back into it as she settled from her start, Corner served it out impressively. When Swiatek rocketed a forehand and Cornet put away the smash at the net the upset was on.

Swiatek faced a test of her resolve in an eight-minute service game to open the second. Cornet held up her hands as a blocked return dripped over the net and it seemed it was all going in her favour. Swiatek responded to not only hold with a winner, but improved hitting from the Pole allowed her to break Cornet in the following game.

Cornet would not go away, though. What looked to be a routine service game for Swiatek swung after a superb drop shot from Cornet, and the swift break back was secured. From there, Swiatek was broken again as two volleys found the net and Cornet flashed the forehand winner to move ahead.

A sublime lob winner from Cornet sealed an important hold and the cracks in Swiatek’s confidence were clear when she could not put away a smash. Determined defending from Cornet led to Swiatek framing the next smash at the net. Her head dropped and Cornet was able to close out the victory after 93 minutes.