According to IDC’s Quarterly Mobile Phone Tracker, India’s smartphone market saw a relatively flat opening quarter with year-over-year (YoY) growth of 1.5 percent to 32.5 million units in Q1 2020. Despite that, India was the only country amongst the top 3 to see any growth, as both China and USA markets declined YoY by 20.3 percent and 16 percent, respectively in Q1 2020. Inventories remained high throughout the distribution channels due to seasonally low demand in the first quarter, clubbed with the COVID-19 impact from mid-March 2020 onwards as the nationwide lockdown was announced.

With a 5.5 percent YoY growth, the ASP for the smartphone market stood at $171. The sub-$200 segment continued to dominate, accounting for 76.2 percent of the market. The mid-range segment of $200

The mid-premium segment of $300

In the premium $500+ segment, Apple continued to dominate with a market share of 62.7 percent, followed by Samsung and OnePlus. The $700

The feature phone segment, which still accounted for 41.2 percent of the overall mobile phone market in India, continued to decline YoY by -29.4 percent with shipments of 22.8 million units in Q1 2020. Xiaomi continued to lead in the overall mobile phone market for the second consecutive quarter with a market share of 18.3 percent, followed closely by Samsung and vivo. 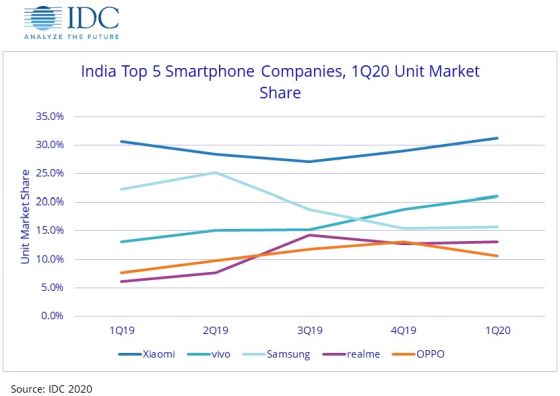 Xiaomi shipments grew by a modest 3.4 percent YoY, registering total shipments of 10.1 million in Q1 2020. The Redmi Note 8/8/Note 8 Pro/8A series was the highest shipped model nationally, accounting for 22.3 percent share. Xiaomi maintained its dominance in the online channel with a market share of 45.8 percent and also surpassed OPPO for the second slot in the offline channel with 20.1 percent share in Q1 2020.

vivo was in second place with strong YoY growth of 63.3 percent in Q1 2020, fueled by its affordable Y series and S1/Pro series. The company continued to lead the offline channel for two straight quarters with a 29.8 percent share in Q1 2020, owing to attractive channel partner schemes, timely price corrections and heavy investments in marketing activities.

Samsung at the third position registered its lowest ever shipments in the past five years, declining by 28.4 percent YoY in Q1 2020. The newly launched Galaxy A51 and M31 were the highest shipped models. But low traction for the offline-exclusive Galaxy A series led to high channel inventory for older models from previous quarters. Online-exclusive models like the Galaxy M31 and M30s were at a slightly higher price, leading to low retail shipments. Its shipments in the sub-$200 segment dropped significantly too, indicating a shift from the low-end segment to the mid/high segment. However, the newly-launched Galaxy S20/Ultra series had modest demand in its opening quarter.

realme surpassed OPPO for the fourth position in Q1 2020, as its shipments grew multifold with several new launches across price segments. The realme 5i, 5s, C2/C3,6 were the top models, accounting for over 70 percent of shipments. realme also became the first brand to launch a 5G device, X50 Pro, in India.

OPPO slipped to the fifth position in Q1 2020, but with a YoY growth of 41 percent. The affordable A series continued to account for a majority of its shipments. The newly launched F15 and Reno 3 Pro had middling demand owing to the availability of better-priced models by competitors. 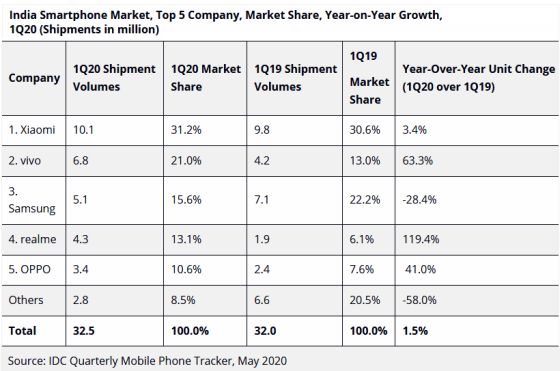 “COVID-19 will have a substantial impact on the Indian mobile phone market in 2020, with potential supply chain disruptions and slower-than-expected consumer demand for the next few quarters. IDC expects the India mobile phone market to follow a U-shaped recovery from Q3 2020 onwards. The pent-up demand from the first half of the year will gradually shift to the second half, rolling over to 2021 as well. A revival in consumer demand is expected around the festive quarter of Q4 2020; with amplified marketing and promotional activities. In these challenging times, brands must relook at their marketing investments, supporting offline channels with hyperlocal delivery initiatives in key cities and try to make up for the lost ground in the all-important second half of year, under the assumption that normalcy will gradually resume Q3 onwards,” said Navkendar Singh, Research Director, Client Devices and IPDS, IDC India.

Xiaomi Gauguin Phones Reportedly Under Development: What To Expect – Gizbot

Xiaomi Gauguin Phones Reportedly Under Development: What To Expect – Gizbot