Francisco Cuevas, Kuna, was arrested and charged with unlawful use of a weapon, reckless driving, attempt to elude and reckless endangering of a person after he crashed his car near Ontario April 16. 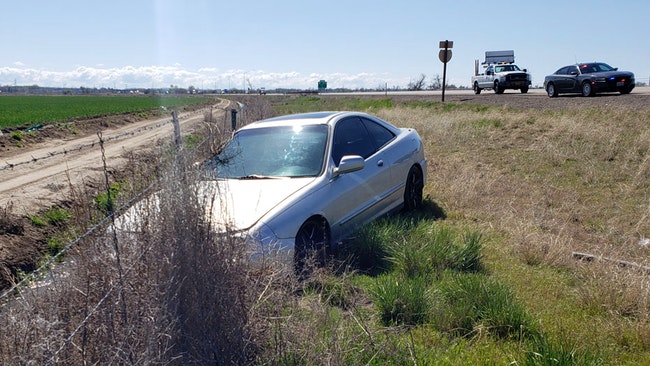 A Kuna man led police from Idaho and Oregon on a high-speed chase last Thursday. The chase ended when the man crashed his vehicle north of Ontario. (Photo courtesy of the Oregon State Police).

NOTE: The Enterprise is providing free access to its content related to the coronavirus as a community service. Subscriptions at $5 a month help the Enterprise keep this up.

ONTARIO – A high-speed police pursuit that began in Idaho and ranged into Oregon ended peacefully Thursday morning just outside of Ontario.

Francisco E. Cuevas, 18, of Kuna, was arrested by the Oregon State Police and charged with unlawful use of a weapon, reckless driving, attempt to elude and reckless endangering of a person after he crashed his car north of Ontario.

State Police Lt. Mark Duncan said the incident began about 10:17 a.m. when the Ada County Sheriff’s Office checked on a report of a possibly suicidal man driving a silver 2000 Acura Integra near Kuna. Sheriff’s deputies attempted to stop the driver, who was traveling north of Kuna at speeds of more than 120 mph, but the vehicle raced toward Interstate 84.

Police chased the vehicle into Oregon where it raced into the state rest stop on the north side of the interstate. The vehicle drove back onto Interstate 84 and as it neared Ontario, ran over spike strips deployed by police, said Duncan.

Duncan said the Integra then went off the freeway but turned around near Home Depot and returned to the freeway.

“It was losing tire pieces and rims were coming apart and finally the wheels came off the car and it lost control,” said Duncan.

The Integra hit a highway fence just north of Ontario.

After the crash, Duncan said driver stepped out of the car with a handgun, but ducked back into the Integra and surrendered moments later.

Duncan said Cuevas was cited and released and then remanded to the custody of Lifeways in Boise.

“Situations like these are fluid and dynamic and we are happy it ended peacefully and no one was hurt,” said Duncan.

HELP THE COMMUNITY GET THE FACTS….

As long as we can, the Malheur Enterprise will provide free access to all stories related to COVID-19. With businesses closed and not advertising, community support for this service is vital. Help one of two ways:

DONATE – to our LOCAL NEWS FUND. Tax deductible, and anonymous if you wish.

DECT Phones Market to Witness Astonishing Growth by 2026 – The...