Phoenix AZ (July 4, 2020) – The pilot Interstate 17 thermal camera system in Phoenix has proven to be a reliable way to detect wrong-way vehicles, alert law enforcement and warn other drivers to reduce the risk of crashes involving often-impaired wrong-way drivers. The Arizona Department of Transportation has already expanded use of the technology, with plans to do more as time and funding allow.

Those are among the key findings in an assessment of ADOT’s first-in-the-nation wrong-way vehicle detection and warning system along I-17. The report includes recommendations for components to be added at urban and rural locations as funding becomes available. 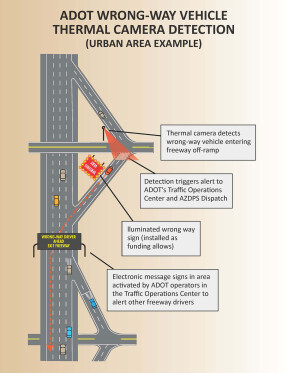 Diagram of primary thermal camera technology components that can be used to detect a wrong-way vehicle at an urban freeway interchange. Credit Arizona Department of Transportation

Compared to waiting for 911 calls from other drivers, the immediate alerts provided by thermal camera detections result in faster response times by law enforcement, a finding borne out by ADOT’s assessment of the I-17 system.

“The I-17 pilot system has delivered positive results and helped provide a road map for expanding use of technology to reduce the risk from wrong-way drivers,” said Dallas Hammit, ADOT’s state engineer and deputy director for transportation. “We’re using the thermal camera technology elsewhere and have established plans for other areas, including rural locations. I want to stress that thermal cameras can’t stop someone from being a wrong-way driver. But they are a big part of our efforts to reduce the risks associated with often-impaired wrong-way drivers.”

Meanwhile, the thermal camera detection technology that is key to the I-17 system has now been installed at most interchanges along the Loop 202 South Mountain Freeway. Installations are underway along Loop 303 in the West Valley, and the technology will be added as part of Loop 101 expansion projects that are under construction east of I-17 and also south of US 60.

ADOT also has converted thermal cameras already used on traffic signals at more than a dozen interchanges in the Valley to send alerts to the Traffic Operations Center and the Arizona Department of Public Safety when wrong-way vehicles are detected. Those include four locations along the Loop 101 Agua Fria Freeway (59th, 67th and 75th and Northern avenues), I-17 at 19th Avenue and Jomax Road, I-10 at 27th and 91st avenues, and multiple intersections along State Route 347 between I-10 and Maricopa.

The $4 million I-17 pilot system was funded by Proposition 400, the dedicated sales tax for transportation improvements approved by Maricopa County voters in 2004. Since the system began operating in January 2018 between the I-10 “Stack” interchange and Loop 101, it has detected more than 100 vehicles traveling the wrong way, mostly on exit ramps and frontage roads along the Black Canyon Freeway. Drivers of most of those vehicles either turned around on exit ramps or pulled into driveways or parking lots without entering I-17 in the wrong direction.

The alert system also features specialized internally illuminated wrong-way signs with flashing LED lights along I-17 off-ramps, designed to get the attention of a wrong-way driver.

The system’s 90 thermal cameras are positioned to detect wrong-way vehicles entering off-ramps or traveling along the freeway in areas between the I-10 “Stack” interchange near downtown and the Loop 101 interchange in north Phoenix. Through a computerized decision-support system, the system also triggers the internally illuminated “Wrong Way” signs with flashing red lights aimed at getting the attention of wrong-way drivers. At the same time, the system immediately alerts AZDPS and ADOT, allowing law enforcement to respond immediately and ADOT to immediately alert other freeway drivers with “Wrong Way Driver/Ahead/Exit Freeway” warnings on overhead message boards.

In addition to installations completed and planned, ADOT is prepared to work with regional planners on adding wrong-way vehicle alert technology elsewhere as funding becomes available. The priority will be locations with the greatest incidence of wrong-way incursions.

“We’re working on determining locations in greater Arizona where thermal cameras could be added for example on overhead message signs or at strategically identified interchanges along rural highways,” Hammit said. “Locations along I-17 between Phoenix and Flagstaff are planned if and when funding is identified.”

One example of the technology’s performance was in summer 2018, when thermal cameras on I-17 detected a vehicle traveling in the wrong direction south from Loop 101. State troopers stopped the driver, who exited the freeway and re-entered going the right way in the northbound lanes. In early 2019, a thermal camera detection at I-17 and Camelback Road led to state troopers stopping a wrong-way pickup in the travel lanes.

There have been successes beyond the I-17 pilot area as well. In August 2019, a thermal camera at I-10 and 27th Avenue alerted ADOT and the Arizona Department of Public Safety to a commercial truck entering the freeway in the wrong direction. Law enforcement stopped the driver on I-17 near Phoenix Sky Harbor International Airport. In 2017, a thermal camera being tested at the Loop 101 Agua Freeway Freeway interchange at 75th Avenue detected a wrong-way vehicle on an off-ramp, helping state troopers stop the vehicle near Grand Avenue.

Longer-term and subject to funding availability, ADOT’s assessment of the I-17 pilot system also recommends installing the internally illuminated, flashing “Wrong Way” sign at urban locations with thermal camera detection. ADOT’s overhead message boards could be used as locations for additional thermal cameras above the roadway in urban and rural areas.

Man in Custody After Dragging Officer With His Car, Highway Chase – NBC10 Boston

As remote work booms, Everphone grabs ~$40M for its ‘device as...