GUANGZHOU — The fuel cell industry is gathering steam in China as the government promotes fuel cell vehicles and related infrastructure.

Amid moves to lure FC-related industries, the Nanhai district of Foshan in the southern province of Guangdong is drawing attention as the first region where drivers can get their fuel cell vehicles topped up.

Xianhu Lake in Nanhai, an hour’s drive west of the provincial capital of Guangzhou, is a popular resort. At present, a 48-sq.-kilometer area — called Hydrogen Valley by locals — is rapidly developing into a hub for FC-related industries.

An exhibition pavilion of hydrogen industries opened at the end of 2019. A development center and facilities for hydrogen-related technologies are due to be completed there in October, and some 500 researchers and students from Wuhan University of Technology and other institutions will gather for studies.

Plans are also underway to establish facilities at the state and provincial levels to examine hydrogen-filling stations and related facilities. There is also a school for joint management with the United Nations Development Program to educate engineers about hydrogen-related industries.

The introduction of FCVs and construction of related infrastructure are accelerating in Nanhai. There are already 800 FCVs in the district, half of which are delivery vehicles and buses. This number is planned to increase in stages, with the district government considering 1,000 more buses.

In Nanhai, six hydrogen filling stations are already operating on a commercial basis. The pace is much faster than in other places as there were only 60 stations in operation across all of China at the end of 2019.

The Nanhai government plans to increase the number of filling stations up to 15 in 2020 and 22 in 2022. On a recent visit to one station, 30 delivery vehicles and 20 buses were reported to have refueled that day. “Full-scale operations are continuing,” said a district government official in charge. 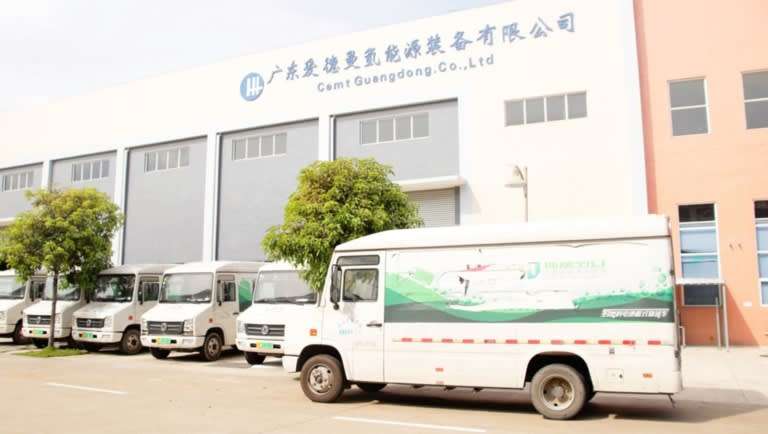 Fuel cell delivery vehicles near a factory in Foshan: Some 30 hydrogen cell-related companies are operating in the Nanhai district of the city. (Photo by Takashi Kawakami)

Nanhai began promoting the hydrogen and fuel cell industries in 2010 following construction of a factory by Guangdong Guangshun New Energy Technology, a leading maker of in-car hydrogen compressors. Encouraged by an increase in businesses coming to Nanhai, the district government stepped up efforts to attract more companies.

China’s first commercial filling station was installed in Nanhai in 2017, and now about 30 hydrogen- and FC-related companies are operating there.

Nanhai decided to attract hydrogen-related businesses due to the large presence of automakers and the district’s financial strength, according to You Zhongying, deputy chief of the government office tasked with promoting the hydrogen industry.

Many automakers — including Germany’s Volkswagen and Japan’s Toyota Motor, Honda Motor and Nissan Motor — have plants in Nanhai and surrounding areas. A large number of auto parts suppliers also operate there.

Nanhai has a strong industrial base as the core district of the city of Foshan, which has the sixth-largest industrial output among cities in China. The Nanhai government has reportedly spent 20 billion yuan ($2.82 billion) to date to promote the hydrogen energy industry as the district’s new industrial sector.

China has high hopes for its fuel cell industry over the past year or two. Beijing mapped out a plan in 2019 to increase the number of hydrogen filling stations to 1,000 and have one million FCVs on the road by 2030.

Toyota announced in early June a plan to set up a joint venture with five Chinese automakers to develop FCV systems for Chinese-made trucks and buses, aiming to start in 2022.

But fuel cell vehicles face challenges. For example, buses need to travel 200 km before refueling, and electric buses already have a range of more than 300 km. In addition, hydrogen is expensive. With half of hydrogen fuel prices subsidized in Nanhai, related businesses are still a work in progress.

“Delivery of FCVs will be able to go beyond the breakeven point without subsidies in 2022,” You said. But local governments are calling on more provincial- and state-level financial support to increase FCV usage.

The Nanhai government expects its investment in the hydrogen industry to date will create economic effects worth 100 billion yuan in the future.

“Hydrogen has growth and future possibilities as a fuel applicable to non-automobile use as well,” You said, referring to the district plan to expand the application of hydrogen fuel from vehicles to other sectors.

ALSPs Under Review: The Path to Becoming A Go-To ALSP Runs Through Common Criteria, With Some Noticeable Omissions | Corporate Counsel – Law.com

OnePlus Nord review: an emphatic return to the mid-range – TechRadar

This ultrawide 49-inch monitor could replace two displays, or more

The Doctor Behind the Disputed Covid Data – The New York...