A newly-unearthed Chinese patent suggests Huawei is working on its first clamshell foldable phone, with a design that falls somewhere between the Galaxy Z Flip and Motorola RAZR.

The Huawei Mate Xs was on-track to be one of the great foldables of its time but after falling under the effects of the US government’s entity list its wings were clipped at launch, namely down to a lack of support for Google Play Services (and an uncomfortably high price tag to boot).

Undeterred by the ongoing legal and political maelstrom the company is having to endure, it seems the Chinese tech giant seems undeterred if these latest patent images are anything to go by.

As spotted by TigerMobiles, Huawei registered a patent with the CNIPA (China National Intellectual Property Administration) for a new clamshell-style foldable phone back in August last year. Its existence has only come to light now as the patent’s authorisation date was cited as 7 July 2020.

The phone in question resembles a cross between the company’s own P-series devices (most closely the P30 Pro) and Samsung’s Galaxy Z Flip.

More like Motorola’s most recent RAZR revival, however, this Huawei clamshell looks as though it folds completely flat when closed. This suggests that, like the RAZR, part of the display on Huawei’s device will tuck into the hinge mechanism when closed in order to increase the radius at the point where the screen folds, placing it under less stress. 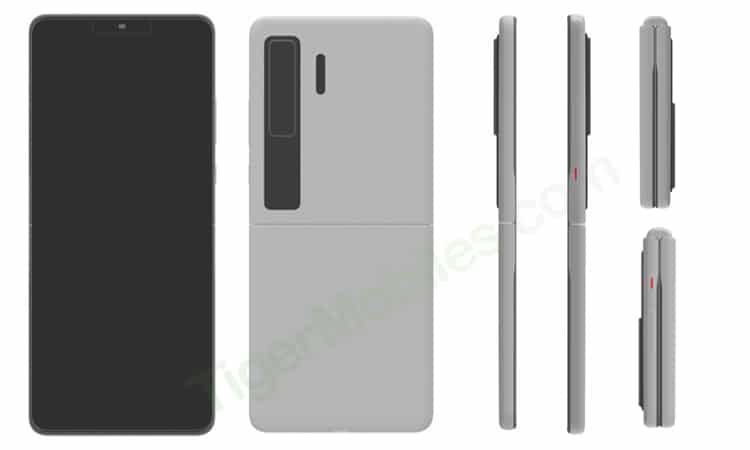 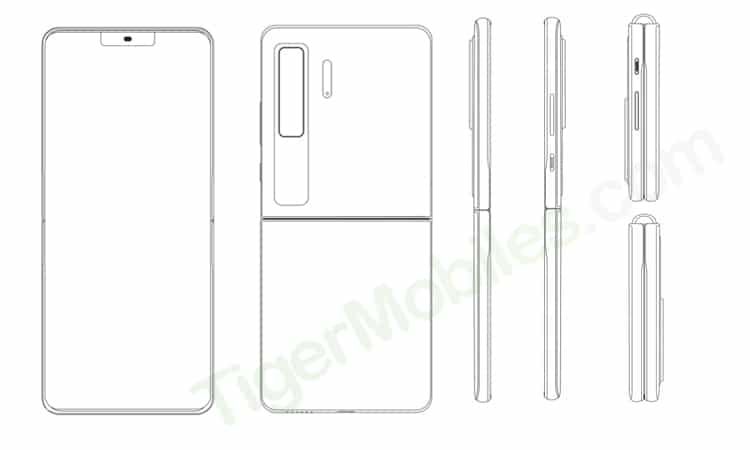 Concurrent rumours from Digital Chat Station that Huawei (and Xiaomi) will use UTG (ultra-thin glass) on upcoming foldables aligns with the possible display tech this concept may leverage once it becomes reality.

Beyond its nature as a foldable, the Huawei clamshell features a tall display with what appears to be a sizeable notch, assumed to house both a front-facing camera and, potentially, biometric components – as found on the Huawei Mate 30 Pro.

The phone’s apparent proportions also allude to a tall, narrow aspect ratio, surpassing 21:9 as on the likes of the Moto G 5G Plus (the Z Flip’s display uses a 21.9:9 aspect ratio, while the 2020 RAZR features a 22:9 aspect ratio).

The right side features the only visible hardware controls, with a volume rocker, sat above what’s assumed to be a red-accented power key, while a USB-C port is visible along the bottom edge (but no 3.5mm headphone jack.

Last but not least is the camera arrangement, which leaves room for multiple sensors, while its surround also plays host to what is thought to be an external display, likely to function in a similar fashion to that of the Z Flip’s – relaying notification information, the time and potentially service as a viewfinder for the camera when the phone is closed.

As for the name, LetsGoDigital spotted that on 3 July 2020 Huawei filed a trademark with the EUIPO (European Union Intellectual Property Office) for the brand name ‘Mate V’.

The application was made by a Munich-based intermediary called Forresters, which Huawei has used for similar services in the past, registering the likes of ‘Huawei AR Glass’ and ‘VR Glass’.

While the filing doesn’t only cover smartphones, based on Huawei’s previous move to use only letters with its other foldables – the Mate X and Xs – it’s a grounded assumption that this new clamshell patent could end up becoming the Mate V.

How to cancel a Peacock subscription

Dyson to cut 15% of its UK workforce

AKG’s new Y400 headphones are made for fashion-forward consumers

How to remove write protection from USB drives and SD cards

How to set up a Chromecast & cast video to your...