Moore’s Law predicts that the speed and performance of a circuit will double every two years. And this continues to shape the trajectory of technology. The law has become a golden rule for pretty much all things digital, including those little handheld computers we call smartphones.

As we move beyond 2020 with a post-COVID hangover, we realise there is a lot more in store for these minicomputers.

So, how will the smartphone and its surrounding technology look like a decade from now, in2030? Here’s our crystal ball:

Right now, all the hullabaloo is around the rollout of 5G networks. By the time we enter 2030, 6G and 7G networks will be bygones. The world of technology will be scaling faster, and smoother and efficient communication technology will be the norm. Arguments will gear around advanced wireless interconnection, terrestrial wireless, and satellite communications.

With projects like Google Loon and SpaceX Starlink, we are already inching closer to a global internet hotspot. In the near future, large entities (like governments or communication companies) will make entire cities and even expressways seamless data zones.

But one of our biggest bets is on quantum communication network that is still in the developmental phase. More on that, below.

Quantum shook up things in the world of physics and is now making waves in the world of computers. Quantum theory says at the atomic and subatomic level, the reality is different. Objects exist in superposition and have characteristics of both particles and waves. In technology, instead of storing data in the binary form of ‘0’ and ‘1’, quantum theory says data can be stored in quantum bits or qubits in the infinite numbers that exist between 0 and 1.

In October last year, Google was among the first to take the big quantum leap. IBM, Microsoft and many other companies have been steadily dedicating resources to towards quantum computing. And with advancements in this field, expect quantum technology to percolate into our smartphones and communication gear.

What to Expect in Reimagined Office Space post-COVID

Internet of Things or IoT and connected cars have already come true. Our smartphones will be connected deeper and deeper to our smart devices and will run our homes, markets, manufacturing hubs and hospitals.

Sophisticated AI machines and augmented reality, like Iron Man’s J.A.R.V.I.S and I, Robot’s VIKI, will become realities (minus all that AI takeover and robot uprising hypothesis). Future smartphone makers will leverage these AI-based advancements, guiding and streamlining our daily missions. 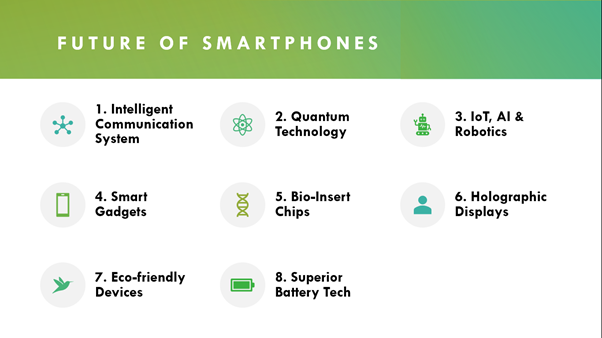 Will there even be smartphones in the future?

After Google Glass, expect more smart glass and hands-free innovative devices. Most of them will be wearable gadgets. As a matter of fact, some researchers claim wearables devices will become more prevalent than Internet of Things in the coming decade. We are already hearing about Amazon-backed company North working on Focals glasses and Microsoft’s reality headsets HoloLens.

Many of these devices will use augmented reality, bone conduction technology or advanced high-tech gear. Some of this technology is already available in the market but is expensive and not that sophisticated.

That’s right! We may all be becoming cyborgs.

Smartphones will cease to be handheld devices. Instead, there will be phone chips such as radio-frequency identification (RFID) microprocessors implanted into your hands or wrists. These chips will be your phone, wallet and driving licence.

Numerous movies have projected phones and devices beaming live 3D holograms. Those futuristic visions may come true. In 2018, South Korean phone-maker Samsung patented displays with Star Wars-like holograms. Queen’s University in Canada is also reportedly working on something called HoloFlex, which, as the name suggests, will be holographic and elastic.

Global push for eco-friendly products has entered mobile phone manufacturing too. Sooner or later, we’ll see phones being charged by solar power or kinetic energy or other greener energy source. Some might even use bio-degradable hardware. Reports suggest some researchers are already working on water soluble silicon for microchips.

And finally, we come to future smartphone batteries – those that could last as long as months. We’re talking about nanobatteries. They have been in research for a long time. These nano-size batteries will be incorporated into the transistors. There is also likely to be breakthroughs in nano-level hydrogen batteries using water-splitting technology.  There have also been breakthroughs with cobalt-free lithium-ion batteries and lithium-sulphur batteries. These are expected to last much longer and also have a low environmental impact.  Then there’s hydrogen fuel and IBM’s much-awaited new chemistry for batteries made out of seawater components.

How Often Should We Be Disinfecting Our Smartphones? An Expert Explains – Yahoo News