Home Windows How to find every secret level in Minecraft Dungeons

Minecraft Dungeons is an amazing action RPG that is accessible to newcomers and has a deceptive amount of depth for those who seek it. The game has 9 levels on the surface, but that goes up to 14 if you work to uncover hidden paths throughout the game.

It can be hard to pinpoint the exact locations of each level unlock, due to the game’s random map generation systems. And hey, it can be fun to discover it for yourself. If you want to save time, though, we’ve put together a quick guide on how to find all of the hidden areas in Minecraft Dungeons, and some general tips towards doing so.

The Creepy Crypt is the largest single map in the game, and is a great source of emeralds and other loot, given that it can carry over 22 chests of various types. This is also the first secret dungeon you can find, and is typically accessible by veering off to the left early on in the Creeper Woods level. It can be hard to describe exactly where it is due to the game’s random path generator, but it’s typically fairly early on in the game, so just explore secondary paths away from the yellow pointer telling you where to go, it feels like it’s almost always on the left side of the map.

If you’ve found the correct path, you’ll eventually come upon a door hidden behind some moss with a secret switch. Inside, you’ll find some ambushing mobs in another crypt, and the map that gives you the ability to unlock the area on the world map.

Similarly to the Creepy Crypt, the Soggy Cave is unlocked via a map you can find in a hidden crypt-like area within the Soggy Swamp level. The entrance is typically somewhere off the main path, and previously we’ve found it hidden off to the left.

Inside, there’s a small area with an ambush event, and then a pedestal containing the map for the Soggy Cave.

The Soggy Cave level itself is incredibly short, coming with a couple of small puzzles and ambush events, but it also has a guaranteed Diamond Chest for good measure. If you’re gunning for a specific piece of loot from its loot table, this might be a good level to farm.

Arch Haven is seaside village island full of Illagers and chests that require a bit of parkour to access. It’s a fun little level, and is a good source of Uniques like the Frost Scythe if you’re gunning for things like that.

Arch Haven’s map can be found within Pumpkin Pastures, off the beaten path inside a small pirate ship. Inside, there’s another ambush event, with the map protected behind a gate. After the event, the gate will open, granting access to the juicy location data.

Due to the random nature of the map generation in Pumpkin Pastures it can be hard to give an exact location, but just explore off to the sides and keep the map up to see which paths veer away from the main waypoint, and you’re sure to eventually find it.

The Underhalls is a large, sprawling crypt-style level that is rammed with undead, Wraiths, and a truly eerie haunted prison area. This is a great area to unlock for dungeoneers, given its size and relative complexity on maximum difficulty.

Underhalls is realtively easy to unlock, typically found near the starting area of Highblock Halls, and seems less dependant on randomness than some of the other level unlocks.

In the first area, at the bottom of some stairs in the main hall, there are two shields hanging on a blank wall. Interacting with one of the shields will unlock a hidden door, complete with the map inside.

The game also has a very special secret level, in tribute to old-school ARPG Diablo II. Read about that over here, but don’t read if you’d rather discover it for yourself. We’ll have a more detailed guide on how to access this super-secret area in the near future. 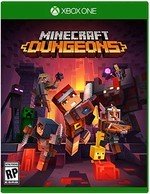 Minecraft Dungeons is an upcoming action RPG set in the blocky worlds of Minecraft! Team up with three friends and get your dungeon crawl on.

How to connect to your QNAP NAS

World of Warcraft: Shadowlands stream has been rescheduled to July 8

Call of Duty: Warzone supports 200 players for a limited time

Minecraft: Bedrock Edition is getting a hotfix update today