PEOPLE on technology-based visas are moving to the North-East to start their own businesses, bringing investment, ideas and talent to the region.

Research reveals 43 per cent of tech talent visa holders in the North-East founded a tech business, the highest percentage in the UK, compared to a national average of 28 per cent.

The Tech Nation Visa Report looks at demand for their tech visa and its impact on regions across the UK. The visa grants employees and founders in the tech sector the right to work in the country for up to five years.

Demand for specialist tech skills in the North-East has continued to rise, with an increase in 132 per cent cyber skills and 73 per cent for AI skills over the past three years.

Demand for the Tech Nation Global Talent Visa has continued to rise, with a growth of 45 per cent and 48 per cent in the past two consecutive years showing the UK’s tech booming sector has battled through Covid.

The report, acknowledging the “profound shifts” the UK labour market has gone through due to the pandemic, states: “Digital tech roles remain in high demand compared to other sectors. During these uncertain times, technology has been an enabler for many companies and communities.”

Demand for the tech visa is expected to rise in 2021 as, from January, the Tech Nation Visa will be opening up applications to exceptional tech talent from the EU.

This global talent is distributed right across the UK, as 41 per cent of endorsed applicants for the visa are based outside of London, working in the UK’s strong regional tech hubs. 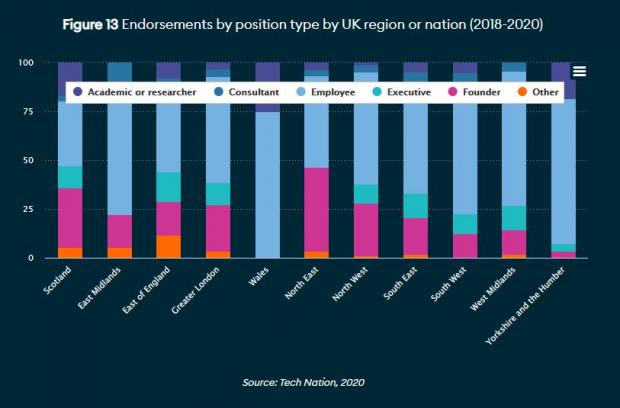 There has also been a 200 per cent increase in the volume of users in the UK searching online for terms explicitly related to ‘UK tech visas’ between April and September 20201 reflecting shifts in the labour market.

This surge in interest to work in the UK’s digital tech sector is reflected globally too, with a 100 per cent increase in users internationally searching for these terms in countries like the US and India.

What Is Apple’s Find My Network?