Obsidian Entertainment is a massive studio that builds some of the best games around, but not all of its games are humongous AAA affairs like The Outer Worlds. Its newest project is Grounded, a passion project from a small team of 13 talented developers that is literally smaller than other games, It shrinks the player down to the size of an ant and has them working to survive in a tumultuous world. It’s a unique take on the survival genre, and the team behind it wants the community to help develop the game, with feedback and suggestions take while in development.

To make this happen, Grounded is getting an Early Access and Game Preview version that anyone can play and it’ll be available on July 28. Here’s how you can join and play Grounded early. 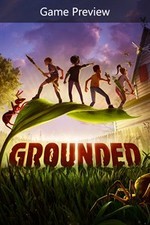 Grounded is an ambitious project from a rather small team, so turning to the community for feedback is a great way to ensure the game is as awesome as possible when it comes out. It also helps the team decide what features and mechanics they should prioritize when developing the game.

Developers then release a game in early access, which usually means releasing the game in an unfinished state specifically to get community feedback.

To make it easier for prospective players to get in on the ground floor wherever they happen to play, Grounded is actually getting two early access options. The first is Early Access through Steam, the largest storefront for PC gaming, while the other brings Grounded to us through the Xbox Game Preview program on Xbox and PC. This makes sense, as Grounded is an Xbox Game Studios title, and Microsoft has recently committed to bringing more of its first-party games to PC as well as Xbox.

How can I join the Early Access or Game Preview for Grounded?

PC players can find Grounded early access on Steam where they can purchase it. Again, if you play on PC, and aren’t picky about where you buy your games, Grounded’s Game Preview will also work on PC, and be included in Xbox Game Pass for PC as well!

We don’t have the price for Grounded’s Early Access or Game Preview yet, but when the game launches on July 28, 2020, we’ll be sure to update this guide with all of that information.

A big value for a small price.

Xbox Game Pass Ultimate gives you everything you need to enjoy Grounded, from access to the Game Preview on Xbox and PC, to the full game being included at launch, and Xbox Live Gold access so you can enjoy online co-op with your friends and family. All of that at a low monthly price makes Ultimate the best value in gaming.

Of course, there’s more to Grounded’s Early Access and Game Preview than just “how to join,” so we’ve compiled some of the most commonly asked questions and given you all the information you need.

What will the Early Access and Game Preview include?

According to Grounded, the Early Access and Game Preview program will include the following game features:

The team behind Grounded will constantly add new content to the game as they collect feedback from the community, so of course this list is absolutely subject to change in the future.

How long will the Early Access and Game Preview last?

There’s no definitive date as of yet, but Grounded’s Early Access and Game Preview programs should continue right up until the game is fully released. Obsidian Entertainment has promised they want to keep the community constantly updated, and will provide its best guesses, with the understanding that plans can change further down the line.

READ  Everything we know about Resident Evil Village (so far)

How will Obsidian Entertainment involve the community?

It’s imperative that Obsidian is able to hear the voices of its community loud and clear, so there will be a variety of ways Grounded’s team will update testers and collect feedback. You can check out its website the development blog, Discord server, monthly dev diaries, or Twitter.

Are you planning to join the Grounded Early Access or Game Preview?

What other questions do you need answers to? Let us know in the comments below!

Obsidian Entertainment makes their exclusive debut on Xbox One and PC with Grounded, a unique survival experience that literally makes all of your problems much, much bigger. Join your friends as you’re shrunk down to the size of an ant, forced to survive in a dangerous backyard.

Observer: System Redux is a launch title for Xbox Series X and S

Shop Dell's Semi-Annual Sale to save 17% on PCs, electronics, and more

These are the best CPUs for playing Microsoft Flight Simulator 2020

The cheapest 5G rugged smartphone could cost less than you think...