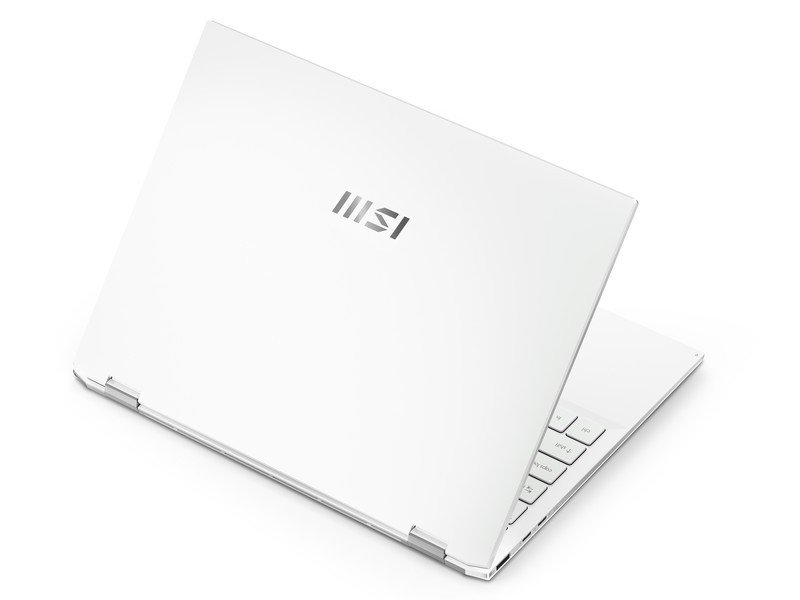 MSI, Acer, ASUS, HP, Lenovo, Microsoft, and other companies announced plenty of PCs and laptops at CES 2021. Whether you’re into a 2-in-1 with touch, the best gaming Ultrabook around, or something a little more conservative on cost, we’ve rounded up all the coolest laptops right here.

CES 2021 played host to Acer announcing the new Predator Triton 300 SE with Intel’s latest 11th Gen processors and NVIDIA RTX GPUs. If you’re looking for a sleek, subtle gaming notebook that doesn’t have obnoxious RGB lighting or heavy design accents, this is about of a sleeper as you can get.

Inside, you’ll find up to an 11th Gen Intel Core i7 H35 CPU. This capable processor is capable of boosting up to 5GHz, allowing one to enjoy high levels of performance, especially when taking into account the NVIDIA GeForce RTX 3060 GPU. Acer’s dual-fan cooling solution should help keep everything cool, thanks to including the company’s 5th Gen AeroBlade metal fan. All the goodness packed inside the laptop will easily provide content to the Predator Triton 300 SE’s 14-inch display, which can hit up to 144Hz.

Even with all this power, the laptop should see upwards of 10 hours before needing to be charged, unless you plan to game, of course.
Acer is expected to release the new Predator Triton 300 SE in the U.S. and beyond in March, starting from $1,400.

It was only a matter of time before one of Razer’s competitors would come up with a gaming Ultrabook to rival that of the Blade, and ASUS announced just that at CES 2021. The ROG Flow X13 is impressive because of how compact the laptop is and what ASUS managed to cram inside.

You can kit this thing out with up to an AMD Ryzen 9 5980HS CPU, up to 32GB of LPDDR4x-4266MHz RAM, NVIDIA GeForce GTX 1650 GPU, and up to 1TB of PCIe 3.0 SSD storage. Things get really interesting is with the optional 4K display, which can be powered using the ROG XG Mobile.

This device is an external GPU enclosure with an NVIDIA GeForce RTX 3080 inside. What’s more, ASUS isn’t relying on Thunderbolt for this external GPU but instead created its own solution with a custom PCIe 3.0 x8 interface that hooks it directly into the CPU. It’s also capable of keeping the laptop powered. This thing will be rapid fast.

READ  Microsoft Teams goes down as many switch to remote working

At CES 2021, HP announced a brand new enterprise-grade Elite Folio 2-in-1. The HP Elite Folio is designed to be a mobile powerhouse, featuring the latest Snapdragon 8cx Gen2 ARM processor with built-in LTE for an always-on, always connected experience.

Lenovo ThinkBook Plus Gen 2 i

Lenovo brought the ThinkBook Plus Gen 2 to CES 2021, and we haven’t quite seen anything like it yet this year. The laptop features an e-Ink display on its back in addition to its traditional display. Compared to the first-gen laptop, this ink display is far larger and more responsive, matching the main display’s 2560 x 1600 resolution.

Not only is the ink display better, but Lenovo also worked in a taller 16:10 main display, Dolby Vision HDR, and Dolby Atmos support on select models. You can configure them up to an 11th Gen Intel Core i7 processor, and it comes rocking its own pen for you to use on the laptop.

Lenovo came out with an entirely new model for CES 2021 in the form of the ThinkPad X1 Titanium Yoga 5G. Thin as a tablet, packed with an Intel 11th Gen Core i7 processor, optional 5G connectivity, and a remarkable 3:2 aspect ratio, this 2-in-1 laptop (with an included pen) is the ultimate mobile productivity machine.

As the name implies, Lenovo is using real titanium in this laptop — specifically the lid. It’s cool to the touch, very light, but also incredibly resilient. Lenovo also uses its other famed materials like a magnesium chassis with carbon for the lower half. It’s light for a convertible and can do pretty much what any other Windows laptop can.

READ  Diablo IV: How the 'always-online' system will work

You can configure the laptop with an optional Qualcomm Snapdragon X55 5G modem (which falls back to 4G LTE is there is no 5G). The 13.5-inch display is also attractive as it is a 3:2 aspect, which is like what Microsoft uses in its Surface line. The 2256 x 1504 display supports Dolby Vision with a decent 450 nits of brightness.

Touch and inking is supported, and you even get a Lenovo pen inside the box. The keypad may be a little shallow for those used to the ThinkPad range, but it’s as good as you’d expect from the company. It’s a solid portable workhorse, and one Executive Editor Daniel Rubino has been enjoying for the past week.

ThinkPad X1 Titanium Yoga will be available to order starting January 2021, with prices starting at $1,899.

So this isn’t the coolest product around since it’s essentially a Surface Pro 7, but Microsoft’s new Surface Pro 7+ is a pretty significant device for 2021. We’ve all changed how we work and learn thanks to the pandemic, and Microsoft is looking to help provide the means to do so with the new tablet designed for the enterprise and education sectors.

The most exciting changes for Surface Pro 7+ start with the SSD, which you can easily remove with a screw. Next up is the processors, which are now from the Intel 11th Gen family, bringing a 30 percent boost in processor performance and nearly 80 percent in GPU thanks to the new Iris Xe graphics.

What’s more, is you can now order a Surface Pro with 32GB of RAM. That version won’t be cheap as it is only available with a Core i7 and 1TB of internal storage, bringing the price to $2,800. Finally, there’s 4G LTE. This isn’t Surface Pro 8, but merely an edition of the Surface Pro 7 designed for business and schools.

MSI announced the Creator 15 at CES 2021, and we’re always excited to see some dedicated workstations for those who require additional performance headroom for design and video. Because it’s focused on creators, you can kit out this laptop with up to an Intel Core i7-10870H processor and up to an NVIDIA GeForce RTX 3070 Max-Q GPU.

It has a 15.6-inch 4K True Pixel Panel verified by Calman and covers 100 percent AdobeRGB. It runs on the new NVIDIA GeForce RTX 30 series graphics. It also has a 99.9Whr battery, which is just under the 100Whr maximum that the TSA allows for checked bags. While we do not know when the Creator 15 will launch, MSI stated it will start at $1,899.

To go with the new Creator 15, MSI also announced its first 2-in-1 touch laptop in many years without a discrete GPU. Focused on enterprise and professionals, the Summit E13 Flip includes a fancy pen for inking and a CNC-milled chassis in white or black (with a rose gold pattern). It is slick-looking but also not ostentatious.

The 13.4-inch full HD display isn’t the best, but at a 16:10 display aspect with 100 percent sRGB color accuracy with touch should be more than enough for those focused on writing and business. Inside, MSI went up to an Intel Core i7-1185G7, which can boost up to 4.8GHz and runs at 28 watts.

Interestingly, besides the up to 1TB storage option, MSI also offers models with 32GB of LPDDR4 RAM. While some laptops like the XPS 13 have this option, most 13-inch Ultrabooks do not, instead of capping off at 16GB. This makes the Summit E13 Flip capable of running heavy-duty software with ease.

The Summit starts at $1,599 for the Core i7, Intel Xe graphics, with 16GB of RAM and 512GB of storage. But that’s around $115 cheaper than a similarly configured Dell XPS 13, so there are the usual savings in going with MSI. The next model up jumps to 1TB storage and 32GB of RAM for $1,899. Look for the MSI in the coming weeks in various markets.

See you next year


These are the biggest PC announcements from CES 2021


CES 2021 was different in that it wasn’t held at a physical location. Instead, companies relied on press kits and virtual presentations to showcase all the new products. We’ve rounded up the best PC-related announcements in case you happened to miss the show.

After Start Menu, Windows 10 is getting floating taskbar menu and more

Get ready for some gaming with the Razer Blade 15 laptop on sale for $1,100

Hearthstone's new Horde-themed expansion is all about leveling up

Diablo 4: Blizzard talks about the Rogue, verticality, PvP and cross-play