A tour guide captured the moment a grizzly bear was surprised by a pack of wolves in Yellowstone National Park.

Adam Brubaker of Tied to Nature tours was taking a group through Yellowstone’s Hayden Valley on Friday when they came across the carnivorous encounter.

At one point, the bear reared up on its hind legs to get a better look over the tall grass.

As many as ten wolves circled the grizzly and nipped at it before escorting it away from what Brubaker believes was their kill, and into the trees.

A white wolf in the pack had blood on her face, suggesting they may have been guarding a nearby meal. 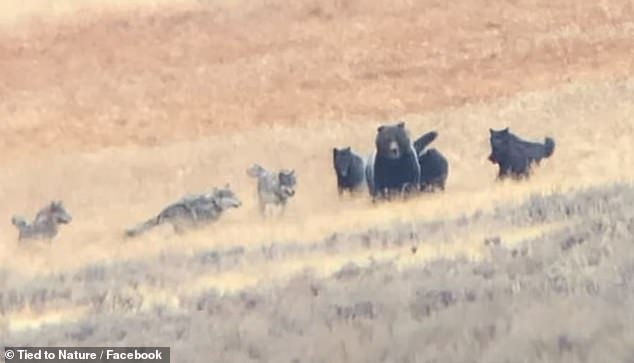 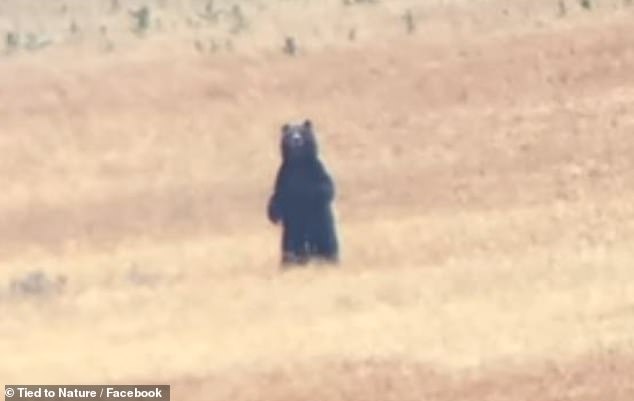 At one point, the bear reared up on its hind legs to get a better look over the tall grass.

In the video, Brubaker can be heard telling his group the bear is trying to figure out what’s going on.

‘That’s why he was standing up. It’s the same thing with people; they don’t want to be surprised by anything.’

On Facebook, Brubaker wrote he had ‘the awesome opportunity to share this once-in-a-lifetime wolf and grizzly sighting.’

He later said he wasn’t sure if the wolves were trying to protect nearby cubs or a fresh kill.

‘From what I could see the pups were not with them,’ he told USA Today. ‘The white wolf has blood on her face and neck, so there could have been a carcass, but while I watched them they were not feeding on one.’

After closing because of the pandemic for several months, Yellowstone reopened two entrances on May 18

Grizzlies and wolves typically avoid each other, but encounters are not unheard of.

Last month, an outdoor photographer captured footage of a lone wolf at Yellowstone trying to steal some of a bear’s kill from right under its nose.

The grizzly was tucking into an elk it had buried by a river’s edge to cover the scent of the decaying carcass.

HOW DO I STAY SAFE IN BEAR TERRITORY? 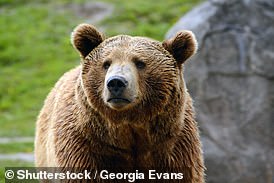 A bold gray wolf picked up on the smell and tried to steal the meat while the bear was napping.

In the video, the wolf calmly sniffs the ground next to where the bear is lying.

The bear lets the interloper get close before it finally leaps to its feet, sending the wolf jumping backwards in fear.

The stand-off continues for almost four minutes, as the plucky wolf makes four approaches and is similarly repelled.

‘This wolf was alone and therefore not much of a threat to the massive grizzly,’ said videographer Seth Royal Kroft, who captured the incredible scene.

‘It was more of a game to him to see how close the dominating bear would let him get to his kill. To my surprise, he let him get very close.’

It all seemed harmless enough but grizzlies, which can weigh up to 600lbs, are normally extremely protective of their kills and their young.

In June, a hiker from Missouri suffered minor injuries after being pawed by a mother grizzly bear protecting a cub on Fairy Fall Trail near Old Faithful.

According to park officials, the woman attempted to use bear spray during the encounter but the bear knocked her over first.

The woman received lacerations on her thigh from the bear’s claws and facial injuries when falling down.

It’s the first time this year someone has been attacked in the park.

The National Park Service advises visitors to give animals space when near a trail, boardwalk, parking lot, or in a developed area, with at least 100 yards for bears and wolves.

Shark attacks 2020: Climate change could be responsible for increase in shark attacks