As the final tourists of the season left the Greek island of Spetses, an international cast and crew arrived to begin filming The Lost Daughter, a drama based on the Elena Ferrante novel.

“We’d made all the preparations but we knew the producers might have to cancel at the last minute because of coronavirus,” said Evgenia Frangias, the island’s deputy mayor. “To our relief they arrived on schedule, followed all the health protocols and were able to shoot here for more than a month. It was a positive experience for everyone.”

Spetses, best known for its historic shipowners’ mansions, is one of a number of locations benefiting from a government-backed initiative that aims to establish Greece as a hub for international television and film production.

“Greece is a natural studio,” said Lefteris Kretsos, who launched the scheme in 2018 while he was the country’s deputy media minister. “It has a huge variety of landscapes, a unique light for filming and a long season for outdoor shooting.” In The Lost Daughter, Spetses has been cast as an idyllic summer resort in Italy, the setting of Ferrante’s novel. 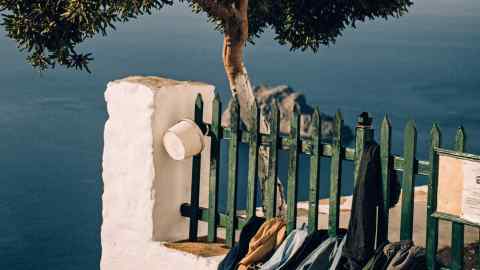 Mr Kretsos conceded that prior to the scheme’s introduction, there were significant bureaucratic hurdles to filming in Greece. “It was so difficult to get shooting permits, especially at famous archaeological sites, that very few international feature films got made,” he said.

In the mid-2010s, when producer Christopher Hall began working on a TV series based on the lives of the eccentric Durrell family who lived on Corfu in the 1930s, he considered taking the filming to Malta or Croatia, rather than the island where the books were set.

“Fortunately we stuck with Corfu and the island itself became a familiar character in the series,” he told a Greek interviewer.

The €75m programme offers a mix of cash and tax incentives to foreign film, television and games producers, who are encouraged to team up with local enterprises that provide crew, technical support and knowhow.

This boosts the creative industries and helps diversify Greece’s economy, while promoting tourism to less-known areas. For example, the proceeds from The Lost Daughter, directed by Maggie Gyllenhaal and starring Oscar-winner Olivia Colman, will go some way to offsetting the losses suffered by local businesses during a disastrous coronavirus-hit tourist season.

Incentives include a cash rebate of up to 40 per cent of Greek expenses on projects with a budget exceeding €100,000, and a 30 per cent tax credit. Several tax and accounting problems that have made life difficult for producers have been smoothed out.

Ekome, the Greek government’s audiovisual media and communication arm, said 77 applications from foreign film-makers had been approved so far and a further 20 were being examined.

“The application process is a box-ticking exercise designed to deliver results swiftly. For example, we’re satisfied with a synopsis of the plot, we don’t ask for a full script,” said Panos Kouanis, Ekome’s chief executive.

Amanda Livanou, chief executive of Neda Film, an Athens production company, said: “It is much easier to work now. One important thing is that longstanding obstacles to hiring and paying extras have been removed so Greece is able to host productions on a much bigger scale.”

She has been working with producers from France and Romania on the drama Broadway, set in Athens during the country’s economic crisis. Athens also morphs into the Middle East for series two of Tehran, an Israeli spy thriller streamed by AppleTV that is shot entirely in the Greek capital.

READ  TikTok 'tried to filter out videos from ugly, poor or disabled users'

On Spetses, café-owner Spyros Michalakis is already looking forward to the island’s next onscreen appearance: a TV series based on The Magus, a 1960s bestseller set on Spetses is on the way. The author, the late John Fowles, taught there.

“It’ll be the best possible promotion for the island,” Mr Michalakis said. “A big television series would really put us on the international map.”

Cerrie Burnell: 'Disabled people have been shut away during the pandemic'

Feel the buzz: the rise and rise of the quizshow in lockdown

Facebook Blocks Creation of Events Near Capitol, Halts Ads for Weapons in Lead-Up to Inauguration Day