Home How-to Got an Old Tablet? Put It to Work in the Kitchen


A lot of people have aging gadgets tucked away in a dusty drawer. One handy use that I’ve found for an old tablet is as a dedicated kitchen hub. This simple thing has really improved my cooking experience.

There are tons of nifty things you can do with old tablets, computers, and phones. Focusing on a single-use purpose is a great way to get some functionality out of an outdated device that’s likely underpowered.

Why a Kitchen Tablet?

The internet is an amazing resource for recipes, which makes your phone the best cookbook in the world. However, a phone is not as handy as a physical cookbook. You’re constantly scrolling between the ingredients and instructions, and the screen turns off while you’re busy chopping onions.

There are, of course, many ways to improve this experience, but the one that I’ve found to be the most life-changing is using an old tablet as essentially an internet-connected cookbook. The screen is a nice size for reading recipes, and an under-cabinet mount makes it even better.

Start with a Clean Plate

The great thing about this is that it’s very open-ended. You could use pretty much any type of tablet you have lying around: an old iPad, a cheap Kindle Fire tablet—even an ancient Microsoft Surface RT.

I’m using an Asus Transformer Book T100TA, which was released nearly a decade ago during the Windows 8 2-in-1 renaissance. The tablet cost around $400 new, which means that it’s very low-powered for today’s standards. It’s a perfect candidate for a project like this.

Once you’ve got an old tablet in hand, I’d recommend doing a factory reset or deleting all the non-essential applications and files. The idea is to make this a streamlined singular-use device. I removed basically everything but Microsoft Edge.

RELATED: 10 Handy Uses for Your Old iPad or Android Tablet

Sprinkle in Recipe Apps and Websites

The next thing to do is customize the device for cooking. Maybe you just need a web browser to search for recipes, or you might have a favorite meal-planning app.

If you’re using an old iPad or Android tablet, this is pretty simple. Go to the app stores and download the apps you use. Once you’ve got the apps, it’s nice to clear the home screen of everything else so that the cooking apps are easy to find. 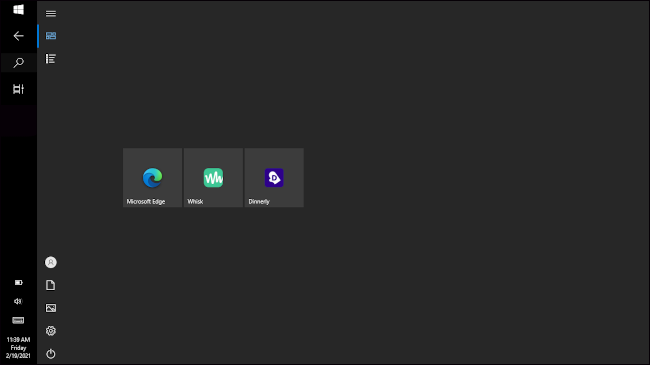 I’m using a Windows tablet, so the idea of “apps” and a “home screen” is a little different. I put Windows 10 into tablet mode so that I’d have a more touch-friendly interface. Then I pinned web bookmarks for the recipe organizer and meal-kit service that we use.

RELATED: How to Turn Tablet Mode On and Off on Windows 10

The key here is to strip everything away and put the kitchen tools front and center. Really think of the tablet as a glorified cookbook.

A dedicated device for recipes is already a great thing to have in the kitchen, but there are a few things you can do to elevate the experience further.

For me, the thing that took it from a cool concept to a genuinely useful tool was an under-cabinet mount. Getting the tablet off the counter and into a more easy-to-read position makes all the difference.

There are tons of tablet mounts available online. This is the one I bought, and it can actually be used as a stand on the counter as well. It has plenty of adjustability and can fold away when you’re not using it.

Another tip is to turn off the lock screen or sign-in screen. Ideally, there’ll be nothing private on the tablet to worry about, so you might as well make it easy to access. This is especially nice if multiple people cook in your home.

In the same vein, you should stop the screen from turning off or set the screen timeout to a longer time. There’s nothing more annoying than having to turn the screen back on when you have messy hands in the middle of cooking. You can do this on Windows, iPads, and Android tablets. 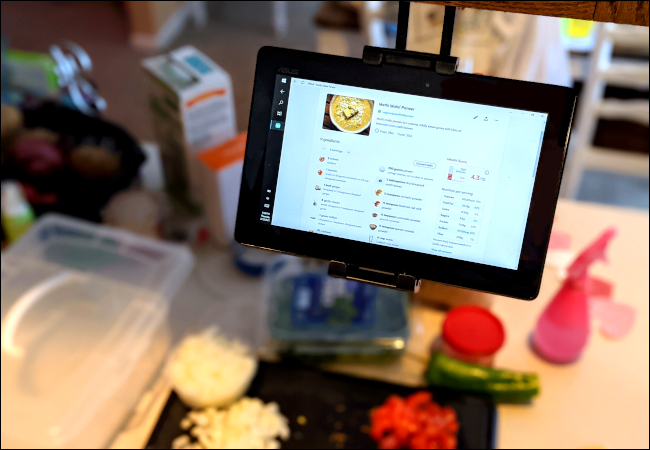 You’re all set to get cooking! I really love having this tablet in my kitchen. It’s so much easier to have a dedicated device for all of my recipes. I don’t have to navigate through a full app list on my phone, and having it mounted keeps the counter clear.

If you have an old tablet lying around, I highly recommend trying this out!