Ghost Recon Breakpoint may have solid shooting and co-op play foundations, but it can’t make up for the aggressive microstransactions, infuriating technical issues and mission structures so repetitive they soon become tedious to complete. After attempting to cherry pick popular features from other games, Breakpoint ends up feeling like a chaotic yet bland mess that really isn’t worthy of your time.

The most frustrating thing about Ghost Recon Breakpoint is that there’s genuinely a great co-op stealth game buried beneath the bloat Ubisoft has piled on top of this stealth shooter.

Sniping soldiers from afar while your pal sneaks into an enemy holding is not only fun, but one of the few experiences where I felt rewarded for strategic co-operative play. Gunplay is excellent too, with high-level realism provided by rifle kickbacks and the juddering spray of a machine gun.

Unfortunately, repetitive missions, technical bugs and predatory microtransactions grate so hard throughout this lengthy open-world venture that the positives are swiftly forgotten.

Ubisoft’s influence is as blatant as bloody handprints in a crime scene, with its infamous cluttered map, obtrusive UI and uneven mesh of varying gaming systems making Ghost Recon Breakpoint feel like a Frankenstein’s monster assortment of past Ubisoft titles, with a shoddy Ghost Recon paint job over the top. 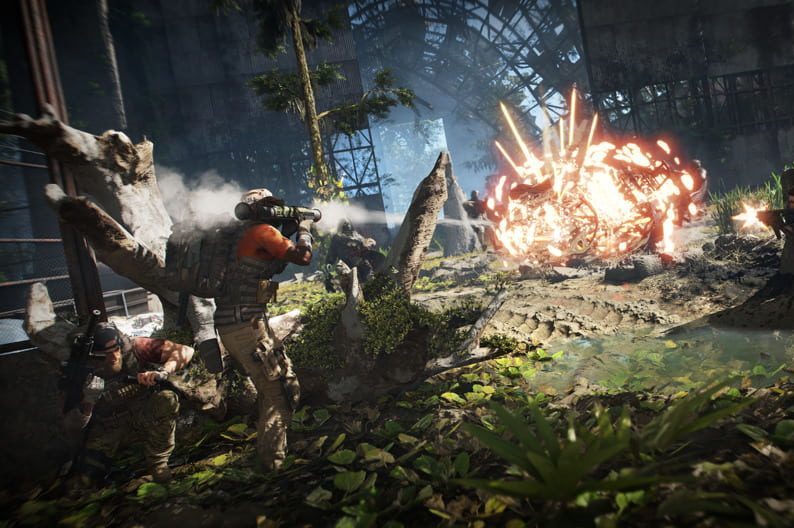 Despite swapping swords for sniper rifles, Breakpoint shares many features with Assassin’s Creed Odyssey, but does a worse job of integrating them. The average rating of your equipped gear – whether that be guns or armour – results in your overall strength level. This puts a large emphasis on raiding buildings for rare gear and provides an extra incentive to complete side missions and clear out enemy holds.

The addictive cycle of attaining new loot isn’t as effective as it is with popular looter shooters such as Destiny 2 and Borderlands 3 though. High-level weapons only really differ from your standard gear in terms of damage and handling, rarely invoking any sort of excitement upon discovery.

Armour is even more guilty for this, as you continuously swap unremarkable looking gloves, helmets and boots for slightly higher level unremarkable looking alternatives. I never felt like I was personalising my character to the extent that he stood out from the other armour-clad avatars at the hub base. You also climb through levels at such a rate you’re forced to swap gear constantly, preventing you from forming any sort of attachment to your gear while also making inventory management a chore.

Every enemy in the game also has a numeric gear rating, but bizarrely their level fluctuates depending on your own when playing story missions, so you rarely feel out of your depth. The only enemy in the main campaign who does have a fixed numeral value attached to them is the final boss. 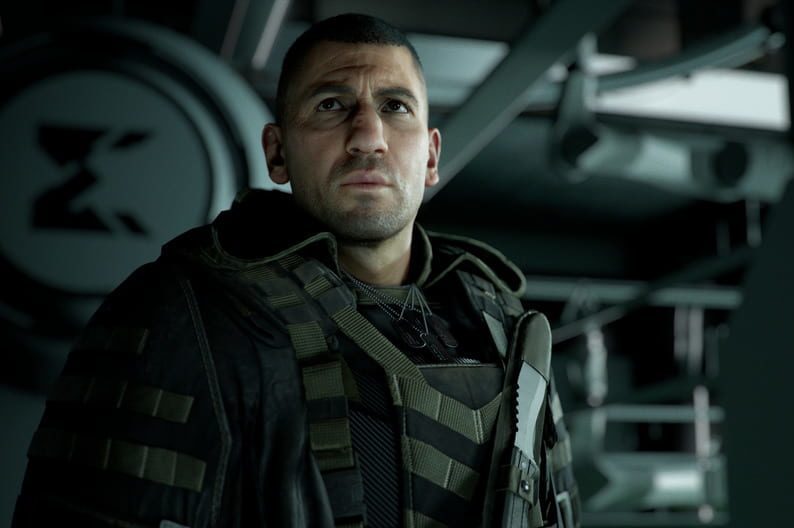 Bizarrely, you can face Colonel Cole D. Walker (played by Jon Bernthal) whenever you fancy, similar to how Breath of the Wild gives you the option of fighting Ganondorf straight away. But just like in the Nintendo adventure, you’re extremely likely to be beaten to a pulp in a matter of seconds if you dare confront the boss prematurely, since Walker occupies an almighty 150 gear rating.

Rather than emphasising the grandiose task ahead of you though, the capability to fight Walker from the start only acts as encouragement to grind. Factor in one of the very worst microtransaction stores I’ve ever seen – allowing you to buy any weapon, attachment or gear with real world cash – and this feature seems to only exist to tempt you into opening your wallet.

In typical Ubisoft fashion, the map is cluttered with icons, signalling points of interests such as your next mission, potential camping spots and loot-filled crates. Breakpoint does at least offer an optional Exploration mode, which erases all of these icons from the map and instead provides you with environmental clues. This is a welcome addition, but I rarely had the urge to use it, mainly because the island the game takes place on is so damn boring. 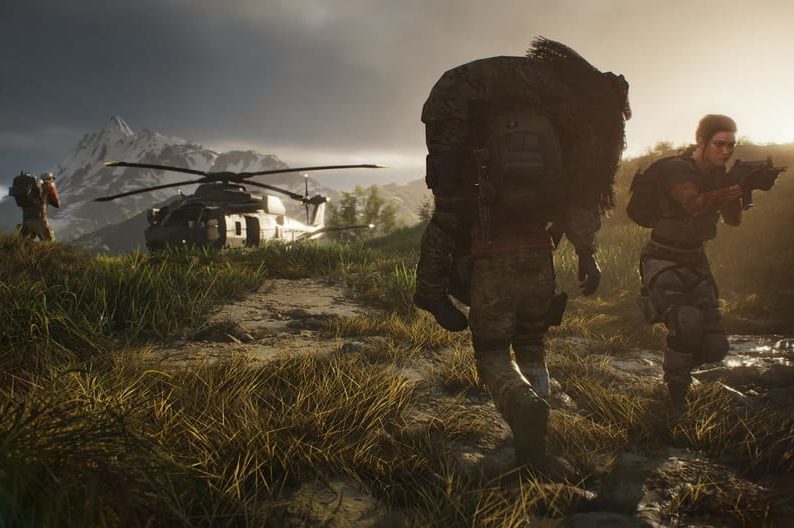 This island, entitled Aurora, is owned by billionaire Jace Skell who is the founder of a company that manufactures drones. This means that apart from multiple laboratories, warehouses, small residential areas and military bases, there isn’t much going on in Aurora. The island looks practically identical wherever you venture too, covered in dense forest and soaring mountains

While the map is dotted with icons signalling loot-filled crates and random NPCs offering up weapon blueprints, there’s rarely anything worth discovering. The level of loot you can find is limited by your own gear level, ensuring a gradual progression in strength, but also destroying any chance of stumbling upon exciting gear. This removes any incentive to explore the island, despite Ubisoft’s attempt to add survival elements.

Stumbling down rocky cliffs can temporarily handicap your stamina meter while injuries sustained from combat can burden you with a limp that can’t be fixed via the regenerative health system. Drinking water and applying bandages are instead required to address these issues. Such systems might be interesting in a more survival-focused title, say Breath of the Wild or The Last of Us, but feel oddly out of place in Ghost Recon Breakpoint, especially since you can just fast travel or spawn a helicopter in one of the many bivouac camping spots scattered across the island.

I’m not convinced Ghost Recon Breakpoint occupying an open-world map actually improves the experience. At the very least it provides a more chaotic and unpredictable structure to missions, as random troops of soldiers can wander past and force you to improvise, but this quickly becomes annoying. I personally think splitting Breakpoint into multiple, smaller hub worlds, similar to the Hitman games, would be a far better fit for this stealth series. 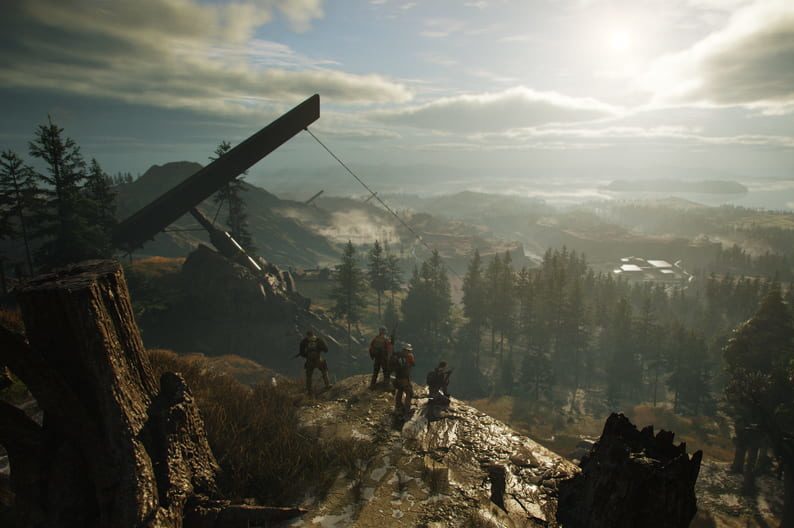 The ridiculous number of technical bugs in Ghost Recon Breakpoint doesn’t do the open-world format any favours either. During my 25-hour playthrough, I stumbled upon countless enemies walking into walls or sitting idly in a car after all their fellow troops had been gunned down. There were also too many game-breaking bugs to forgive: I fell through the ground into the abyss on a couple of occasions and even had to restart a couple of missions after objective-compulsory items failed to spawn. Even a week after launch, many of these issues are still prevalent.

Technical issues also creep into story-focused cutscenes, with clipping and shoddy animations making serious and dramatic scenes inadvertently humorous. Perhaps they’re a welcome distraction in this instance though, as the writing and narrative is laughably cringe-worthy.

Ghost Recon Breakpoint focuses on Walker’s attempt to take over the island via his army of drones. There’s little more depth to it, with the majority of cutscenes focusing on flashbacks with the main purpose of explaining and justifying Walker’s betrayal of the US army. Jon Bernthal at least puts in a decent performance as the main villain, but essentially just portrays a one-dimensional version of the Punisher with stubborn pride and more testosterone than a sperm bank.

The story missions also lack any sort of narrative pacing, with little sign of a difficulty curve or variation on the typical base-infiltrating mission structure. There’s not much build up for the final showdown with Walker, and even that results in an anti-climax. Of course, a cinematic cliffhanger suggests there will be more story content arriving in the future, along with raids and new weapons/gear, but I for one have absolutely no urge to ever return to the drone-infested island of Aurora. 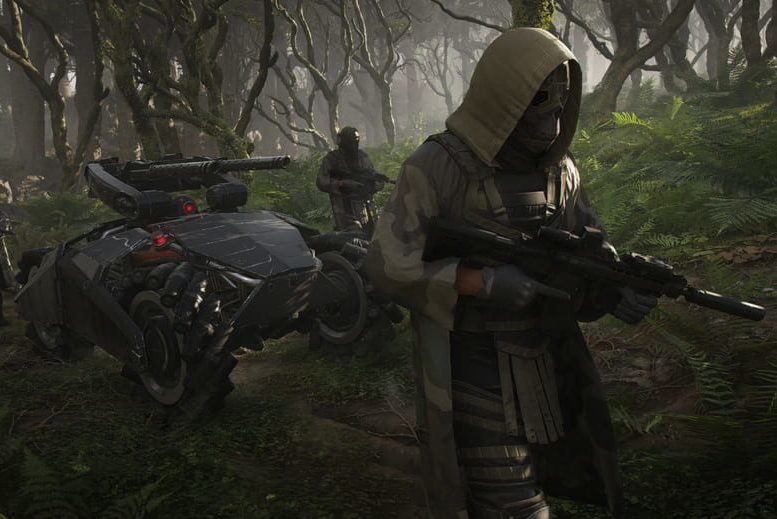 If I ever do return to Ghost Recon Breakpoint, it would only be for the PvP multiplayer. Squads of four face off against each other, encouraging cooperative and strategic play. Maps are usually fairly large, but with almost every player armed with a sniper rifle, it’s compulsory to stay behind cover and sneak undetected through the battlefield.

Drones can be picked up around the map, which allow players to scope out the enemy and mark them on the mini map temporarily. If you hack into a computer terminal located in the centre of the battlefield, you can have every enemy flag up on the map for a lengthy amount of time, which often results in a sniper turning your head into a raspberry firework.

One feature I really like is that you only can be revived at any point in a multiplayer match until every one of your teammates kicks the bucket. This forces you to defend downed enemies from hopeful medics or risk the opposition escaping the brink of destruction and reviving every single member of the squad.

A massive downside of the PvP matches though, is that you’re able to carry the gear and weapons looted from the story campaign over into multiplayer. High-level loot perks are seemingly removed for PvP, evening the odds by some extent, but gold-tier guns naturally handle better and can equip more useful attachments than what you start off with.

This unfortunately means multiplayer matches feature a pay-to-win element, as buying the best guns available via the microtransaction store will undeniably give players the advantage. Ubisoft has clearly done this on purpose as another incentive to part with your cash, with little concern for the enjoyment of those unprepared to pay more than the cost of the base game.

Ghost Recon Breakpoint gets the fundamentals right, with excellent gunplay and fun stealth missions that encourage strategy with a friend via online co-op. Unfortunately those are the only positives in a game riddled with technical issues and exploitative microtransactions.

Ubisoft attempted to cherry pick the most trendy elements of modern video game for Breakpoint, featuring an RPG-style loot system, a survival mechanic and a sprawling open-world map. Unfortunately they don’t feel like a natural fit for this series and end up feeling like a cluttered mess detracting from the core shooter experience.

Formerly the Staff Writer at Stuff Magazine, Ryan’s been writing about tech since he graduated from Cardiff University. At Trusted Reviews he is focussed on everything computer-related, giving him a v…

10 Video Games That Will Consume Your Life – WhatCulture

Crypto Tycoon: It’s like Texas Hold ‘Em and Monopoly had a Bitcoin-savvy baby

5 joyful video games to put your mind at ease – LancasterOnline

Windows 10 updates could now slow down your PC – here’s...