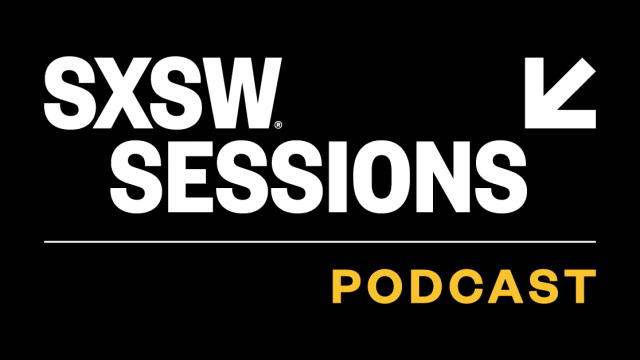 South by Southwest sessions are available on the go, in the car, and all at the touch of a button with the SXSW Sessions Podcast. This weekly podcast features Keynotes, Featured Speakers, and popular sessions recorded live at the event in Austin, TX.

The SXSW Conference spans across different trends and themes through a variety of programming including Keynotes, Featured Speakers, panels with audience Q&As, and more Session Formats. With speakers from all industries and backgrounds, attendees are able to learn and discover what’s next in the worlds of tech, film, music, and beyond.

Bring the SXSW stage to your device and listen to SXSW Sessions Podcast episodes. Explore some highlights from our podcast below including Julia Sweeney, Kwame Onwuachi, David Byrne, Stephen Colbert, and more. Visit our Spotify for all episodes or download from wherever you get your podcasts to tune in and turn up the inspiration.

Lori Gottlieb takes us on an eye-opening, behind-the-scenes tour of the human condition, sharing stories of the patients she sees as a therapist–along with her own as a “card-carrying member of the human race.” In conversation with actress Julia Sweeney, she’ll be talking about what it’s like being on the emotional front lines of the current crisis, the role of laughter and joy especially during challenging times, and the life-changing benefits of sharing our stories – the real ones – with each other.

Chef Onwuachi‘s restaurant Kith/Kin was one of the hottest reservations in the country but when COVID-19 closed its doors the James Beard Award-winning Chef turned into an activist. He joins Liz Bacelar, a journalist and mentor since the start, in a candid chat on how he has been fighting for local restaurants and their employees, on facing racism in the culinary world, and his hit memoir, Notes From a Young Black Chef, becoming a Hollywood film.

Listen to a lively talk between director and comedian Judd Apatow and Emmy Award-winning host of The Late Show with Stephen Colbert, Stephen Colbert. In this session the two friends will talk about their new films, experiences in quarantine, and much more.

In January 2018, Grammy, Golden Globe, and Academy-award winning musician, filmmaker, and writer David Byrne launched a multimedia project titled Reasons To Be Cheerful. Named after the song by punk artist Ian Dury, RTBC became David’s personal way of dealing with what’s happening in the world. Listen to the legend discuss ideas for positive change within the areas of Civic Engagement, Climate/Energy, Culture, Economics, Education, Health, Science/Tech and Urban/Transportation, with the aim of giving people the information and tools to act locally.

A conversation with FX’s Fargo and Legion creator, writer, and director Noah Hawley on his career and making television (and film) in today’s fractured entertainment landscape.

Black Girls CODE is an organization dedicated to bringing girls of color into the field of technology as transformational change agents. In this session, hear tech pioneer Kimberly Bryant lead a panel featuring BGC students and alumni under the age of 20 for a lively discussion on education, social activism, and securing the future for black women in technology, while encouraging a broader conversation on how intersectionality can create more opportunities for girls of color in STEM and drive social change movements.

China launches Chang'e-5 mission to bring back rocks from moon

SUVs dominating auto market in 2021, but some four-door sedans aims...