Home Windows Get a $50 Amazon gift card when you purchase a year of...


Black Friday and Cyber Monday may be over, but there are still some great deals available. Right now, if you purchase a year of Microsoft 365 Family, you can get a $50 Amazon gift card. A year of Microsoft 365 Family only costs $100, so getting $50 is almost like getting it for half price, as long as you already plan to spend an additional $50 on Amazon at some point in the future. 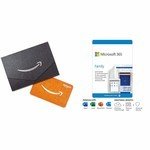 A great way to get Office for the whole family

You can snag a year of Microsoft 365 for your entire family. As part of the deal, you get a $50 Amazon gift card that you can spend on anything.

With Microsoft 365, you get Microsoft’s premium apps, including Word, Excel, PowerPoint, Outlook, and OneNote. You also get the PC versions of Access and Publisher. On top of that, you get up to 1TB of OneDrive storage for each user (up to six people).

Microsoft also has some newer tools that come with Microsoft 365 Family, such as Microsoft Editor and Microsoft Family Safety.

Microsoft 365 isn’t limited to Windows either. You can use many of Microsoft’s apps on Windows, macOS, iPadOS, iOS, and Android.

One thing to note about this offer from Amazon is that it will set you up for auto-renewal. You can cancel this if you’d like, but the deal sets you up to pay for and receive Microsoft 365 each year.

Is the latest DLC pack for Dead Cells worth your time?

Microsoft brings in a record-breaking $43.1 billion in rev for FY21 Q2

Your computer’s in the 21st Century, so don’t leave your printer in the 20t