Gatik, a startup developing an autonomous vehicle stack for B2B short-haul logistics, today closed a $22.5 million series A financing round. The company also announced it will bring a fleet of self-driving vans to Canada as part of a deal with Loblaw, the country’s largest retailer with over 200,000 employees.

Some experts predict the pandemic will hasten the adoption of autonomous vehicles for delivery. Self-driving cars, vans, and trucks promise to minimize the risk of spreading disease because they inherently limit driver contact. This is particularly true with regard to short-haul freight, which is experiencing a spike in volume during the outbreak. The producer price index for local truckload carriage jumped 20.4% in August from July, according to the U.S. Bureau of Labor Statistics, most likely propelled by demand for short-haul distribution from warehouses and distribution centers to ecommerce fulfillment centers and stores.

Palo Alto, California-based Gatik, which has offices in Toronto, is the brainchild of Carnegie Mellon graduate and CEO Gautam Narang. He, CTO Arjun Narang, and chief engineer and former Ford computer vision lead Apeksha Kumavat founded the company in 2017.

Gatik’s platform taps level 4 autonomous vehicles (vehicles capable of operating with limited human input and oversight in specific conditions and locations, as defined by the Society of Automotive Engineers) to fulfill on-demand and scheduled deliveries up to a distance of 200 miles. Its retrofitted trucks and Ford Transit 350 vans and orchestration software, which the company has been testing on public roads in California since Q1 2018, ensure goods are transported ostensibly less expensively around city environments.

READ  Apple sets scene for 5G ‘for the rest of us’

For Loblaw, Gatik says it will transport “multi-temperature” goods and products from the retailer’s microfulfillment centers for inventory pooling across multiple locations, multiple times a day, to retail outposts across the Greater Toronto Area beginning January 2021. The program will cover five routes that will operate 12 hours a day, seven days a week. 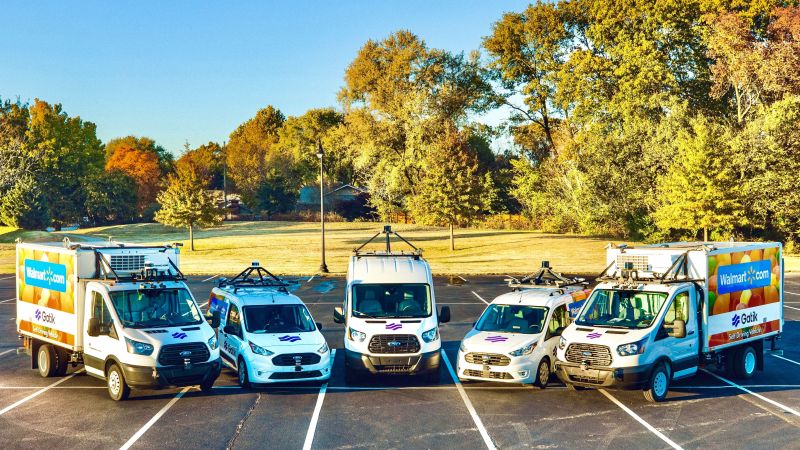 “Gatik’s fleet of Class 1-6 autonomous vehicles moves goods from microfulfilment centers and dark stores to pick-up points like retail stores, distribution centers and offices — known as the middle mile,” Gatik head of policy and communications Richard Steiner told VentureBeat in a recent interview. “This is critical because the middle mile is the most expensive and challenging part of the supply chain for retailers to contend with. … The key to Gatik’s success involves optimizing fixed, predetermined routes, such as those used along the supply chain’s middle mile, countless times each day. The biggest threat to the autonomous revolution is the unknown, or ‘edge cases,’ which are substantially reduced on fixed journeys.”

In July, Walmart revealed that it had launched a pilot with Gatik to ferry customer orders between select store locations in Bentonville, Arkansas. Gatik’s vans transport items from a warehouse to neighborhood market stores along a two-mile route (or five-mile one-way route) in Bentonville, with each van making up to ten runs a day during daylight, with human operators behind the wheel as backups.

More recently, Gatik received a $100,000 grant from PlanetM, a Michigan Economic Development Corporation program to provide funding for solutions to challenges the pandemic presents in Michigan. In collaboration with an unnamed partner, referred to as “one of the state’s largest retailers,” Gatik says its autonomous trucks will operate on predetermined, fixed routes throughout Grand Rapids and Rochester.

BrandPost: Getting the Most Out of Your Computing Investments

AI Weekly: The Biden administration, algorithmic bias, and restoring the soul of America

How apps can help you build a healthier WFH office

How mixed reality (and Hololens) boosted productivity at Lockheed Martin

The work-from-home employee’s bill of rights