Entertainment, in all of its forms, has always been an important pastime for Americans. And now with millions sheltering at home, it’s taken an even more crucial role in helping people escape the boredom and anxiety that comes with a global pandemic. As a result, there have been huge increases in not only TV consumption but also gaming. And it’s not just about playing solo: Social video has given rise to replays, promotions, live-streamed speedruns, and more that connect everyday players to the gaming franchises and influencers they love most.

During the week of March 30, gaming content on YouTube had its best week ever — with 17 billion views, representing a 24% year-over-year growth. Facebook has also seen an increase in gaming videos, although not as much as YouTube.

When it comes to the performance of various types of gaming content, there’s growth across the board, with the highest jump (35%) belonging to online games. (In the chart below, performance is based on Tubular’s V7 rating, which is the average number of views per video within the first seven days of upload, comparing pre-and post-COVID-19.) 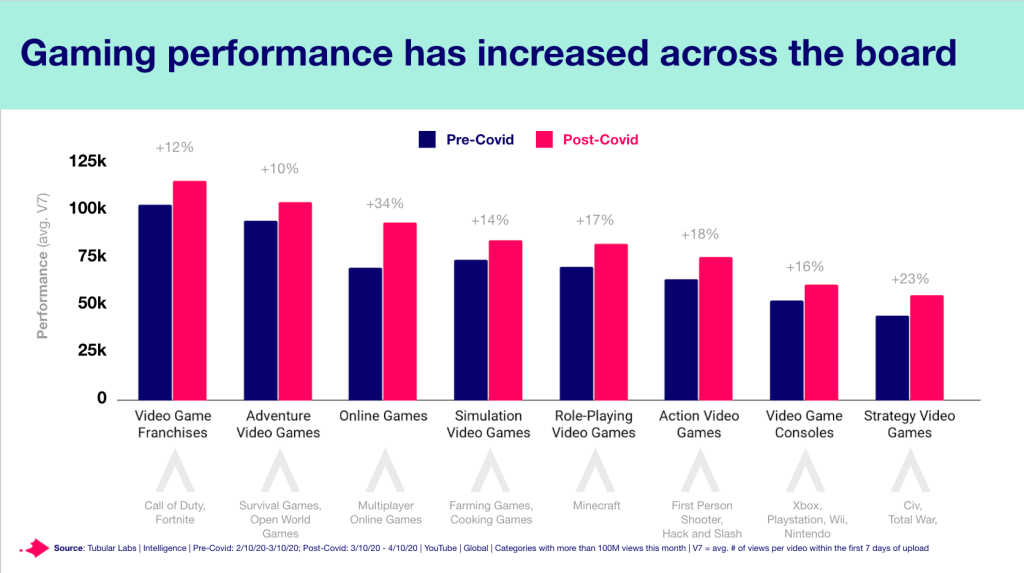 Tubular also examined trends around some of the most popular games: Call of Duty, Minecraft, and Fortnite.

There have been 60% more Call of Duty videos uploaded on YouTube since people began sheltering in place in March, particularly around its Warzone’s Season Three. The pandemic has also given new players a chance to rise in the ranks: Four of the top five creators of Call of Duty content from March 10 through April 10 were not in the top five in the previous 30-day period.

Of course, Call of Duty: Warzone launched March 10, so in addition to benefiting from folks staying home, the community is also excited for this new battle royale experience. 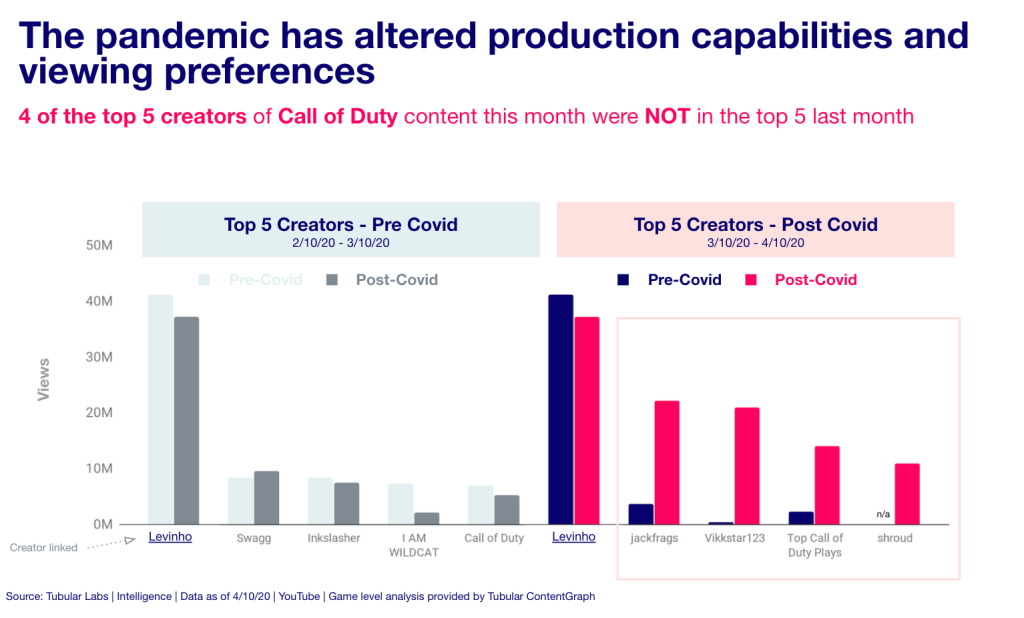 Minecraft has seen more modest growth (6% in videos uploaded), but one creator in particular, Skeppy, has seen viewership skyrocket by an impressive 285%. 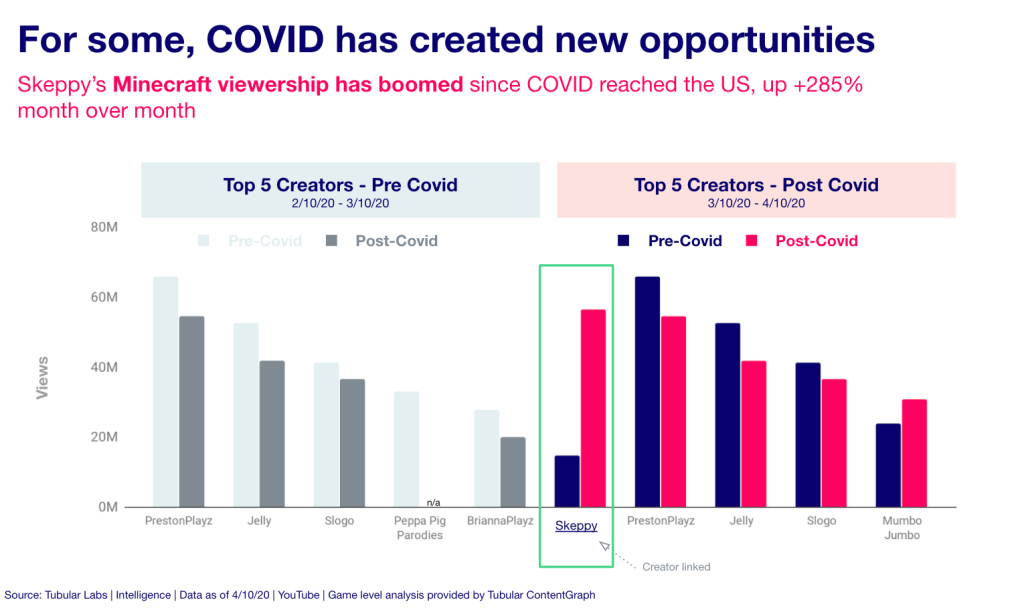 Independent creators aside, official brand channels are an important part of the puzzle. And from Tubular’s analysis, it’s clear that Fortnite is revving up: The official channel has uploaded twice as many videos during the pandemic than it did in the 30 days prior, putting it in the top five for overall Fortnite creators. (Note: This was compiled before the Travis Scott concert.)

As marketers across myriad industries scrambled to revamp advertising strategies amid COVID-19, gaming is one area in which they’re latching on. Overall, 249 brands have worked with 457 gaming partners since the pandemic began, and per video performance is up, with the top campaigns delivering more than 1 million average V7 views. Looking at YouTube specifically, the week of March 30 was the most-viewed week for sponsored gaming content this year, and the sixth most-viewed week in the last three years. 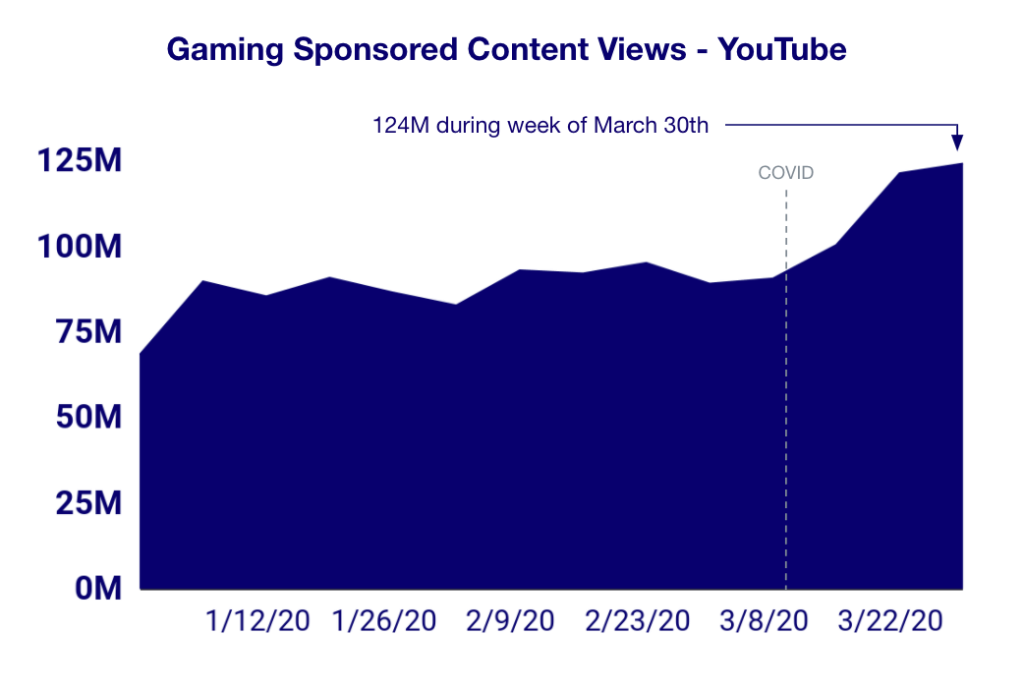 With traditional live sports all cancelled, the pandemic could be esports’ time to shine. The week of April 6 saw the most views on esports content since the week of the Fortnite World Cup Finals last year. Live esports content draws viewership from an engaged crowd, those live videos are making an impact on demand as well. Tubular found that live esports videos that are published later generate a 20% higher average V30 rating and are 40% more engaging. 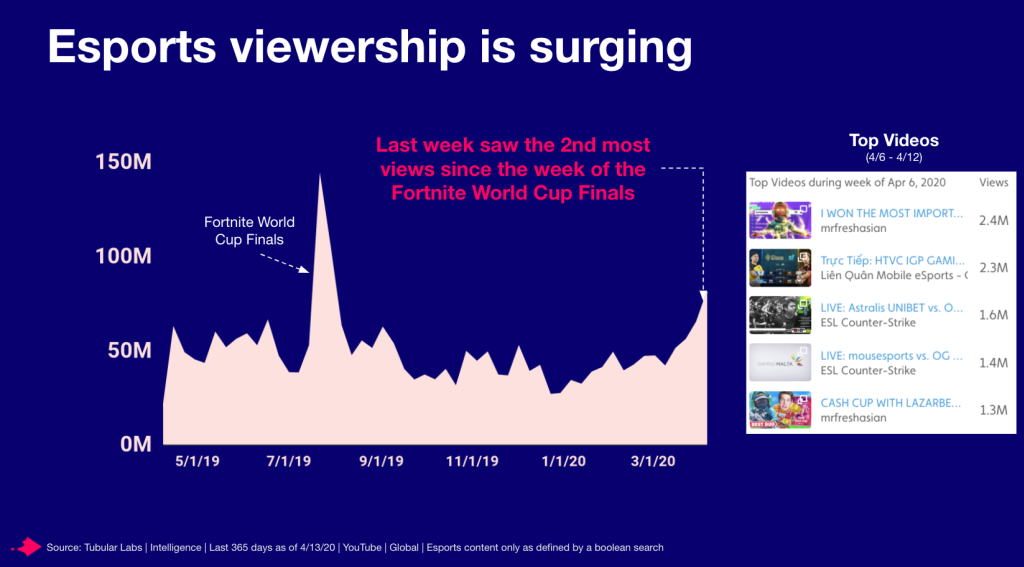 When it comes to watching live streams, Twitch is one of the most popular platforms, and it’s only gaining steam in the pandemic. In the weeks after the outbreak, live streaming of gaming creators reached up to 869 million minutes watched per day across all viewers, a 20% growth from two weeks prepandemic. Who and what are they watching? 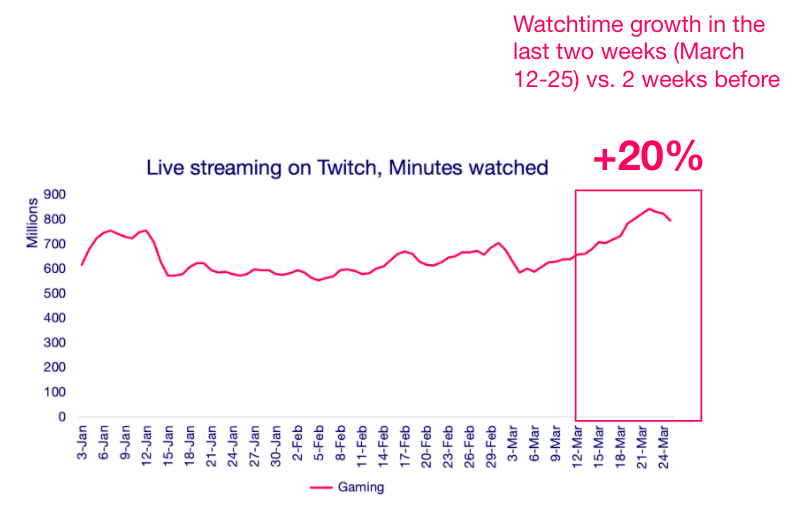 The Electronic Sports League leads for minutes watched, followed by creators summit1g and loltyler1; highest watch time by game goes to Call of Duty: Modern Warfare and League of Legends.

Twitter’s experiment to get you to read stories actually worked

Here’s how to get the anime filter on Snapchat