Spanish practice Smart & Green Design re-designed the Barbican’s touring Game On exhibition for a former underground cistern in Madrid, using more than 150 LED arches to evoke the neon colours of the 1980s.

The retrospective, which is reportedly the largest international exhibition to explore the history of video games, spans more than 400 collector’s objects and drawings covering the birth of the technology in the 1960s to the present day.

Alongside this, 150 original video games can be played as part of the show, including early games like Space Invaders and Tetris, classics like Rock Band, Pokemon and The Sims as well as more recent games like Fifa and Wii Sports.

After touring more than 30 countries including China, the US and Australia, the exhibition came to Madrid between November 2019 and May 2020 courtesy of arts and culture foundation Fundación Canal.

Set against an otherwise dimly lit interior, these nodded to the vector graphics of early video games such as Battle Zone, in which simple lines and curves on a black backdrop were used to create the illusion of three-dimensional spaces.

LEDs were arranged into colour-coded arches and tunnels to create the impression of architectural elements, demarcating 15 distinct sections and guiding visitors through the exhibition. 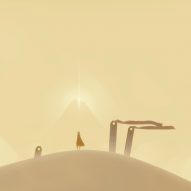 READ  MCO: The best video games to get lost in while self-isolating at home - The Star Online

“The design follows simple geometries and repetitions as some of the most famous video games did,” Smart & Green Design‘s founder Fernando Muñoz told Dezeen.

“These lines created perspectives and the illusion of a 3D space, despite all the elements being two dimensional.”

Each section was also signposted through a neon sign proclaiming its theme, which was suspended in the air in a nod to the floating score numbers often found in the top corner of a game’s screen.

The main challenge for the studio was to balance the buzz and excitement of an arcade with the kind of quiet, contemplative spaces needed to take in the archival objects, sketches and the stories behind them.

While stations for playing the games were placed inside of the cistern’s existing 7.5-metre tall brick arches, each illuminated by an LED frame, the remaining exhibits were housed in “lights tunnels”, running perpendicularly to the arches.

“The rhythm of these structures created the feeling of being inside a separate space and they also hold either walls or vitrines to show the contents.”

To create these walls, the studio opted for sound-absorbing panels, which had the dual benefit of muffling the noise coming from the gaming area outside as well as being easier to reuse for future exhibitions.

“We try not to use heavy resources like MDF or drywall, which cannot be reused without generating waste and need a lot of energy both in the assembly and disassembly,” said Muñoz.

“We try to create lightweight systems that are easily assembled and stored and with standardised dimensions so that they can be reused and adapted to any space or design.”

In order to offset the high embodied energy of the LEDs, Muñoz designed the lighting system to be modular, with tubes that are either half a metre, one metre or two metres long, so that they can be efficiently stored and repurposed again and again in different constellations.

This is part of the studio’s wider strategy to try and cut down the amount of waste produced through temporary installations.

“The exhibitions industry is responsible for a huge amount of waste due to the ephemeral condition of its products,” Muñoz explained.

“We believe that through design and longterm strategies of collaborating with exhibition organisers, waste can be reduced. We have designed our own carbon calculator and tailored protocols to interact with the administration and coordinators in the exhibitions world.”

Aside from Game On, other exhibition designs shortlisted for Dezeen Awards 2020 include a memorial filled with items that belonged to victims of gun violence and an installation at Fondazione Prada with 1,400 porcelain plates suspended from the walls of a golden room.

Although the recipients of the public vote have already been determined, the winners of the official Dezeen Awards, judged by a panel of experts including Norman Foster, Michelle Ogundehin and Konstantin Grcic, will not be announced until the end of November.

The Game On exhibition took place from 29 November 2019 to 31 May 2020 at Madrid’s Castellana 214. See Dezeen Events Guide for an up-to-date list of architecture and design events taking place around the world.

The Internet Archive is now preserving Flash games and animations

Roblox goes public so that it can build a bigger metaverse

Roblox files for IPO, a first for user-generated game platforms

Where to buy PS5: Walmart in stock now, UK stock nearly sold out

AIB in exclusive talks to buy back Goodbody Stockbrokers