Mozilla today launched Firefox 76 for Windows, Mac, and Linux. Firefox 76 includes new Firefox Lockwise password functionality, Zoom improvements, and a handful of developer features. You can download Firefox 76 for desktop now from Firefox.com, and all existing users should be able to upgrade to it automatically. According to Mozilla, Firefox has about 250 million active users, making it a major platform for web developers to consider.

The coronavirus is impacting not just everyone spending more time in their browsers as they learn and work from home, but also the software developers building the browsers. Google was forced to delay Chrome 81, skip Chrome 82 altogether, and move Chrome 83 up a few weeks. Microsoft followed suit with Edge’s release schedule, consistent with Google’s open source Chromium project, which both Chrome and Edge are based on. Last month, Mozilla made it clear that while “some of our competitors have had to slow down or stop work,” it is sticking with its 2020 Firefox release schedule.

Mozilla this year sped up Firefox releases to a four-week cadence (previously they arrived every six to eight weeks). Even before the impacts of the COVID-19 pandemic, Firefox staff and contributors worked remotely, tested on remote hardware, and collaborated across timezones. While the schedule remains unchanged, Mozilla did shift its roadmap to avoid shipping changes that might negatively impact the user experience on, or possibly break, government and health services websites. The company also committed to fixing video conferencing issues.

Lockwise, the password management service formerly known as Firefox Lockbox, is getting smarter. The Firefox feature already lets you generate, manage, and protect all those passwords for streaming services, grocery deliveries, and anything else that helps during the pandemic.

If you share your device with family or roommates, Lockwise in Firefox 76 can now protect your saved passwords. When you try to view or copy a password from your “Logins and Passwords” page, you will be prompted for your device’s account password. 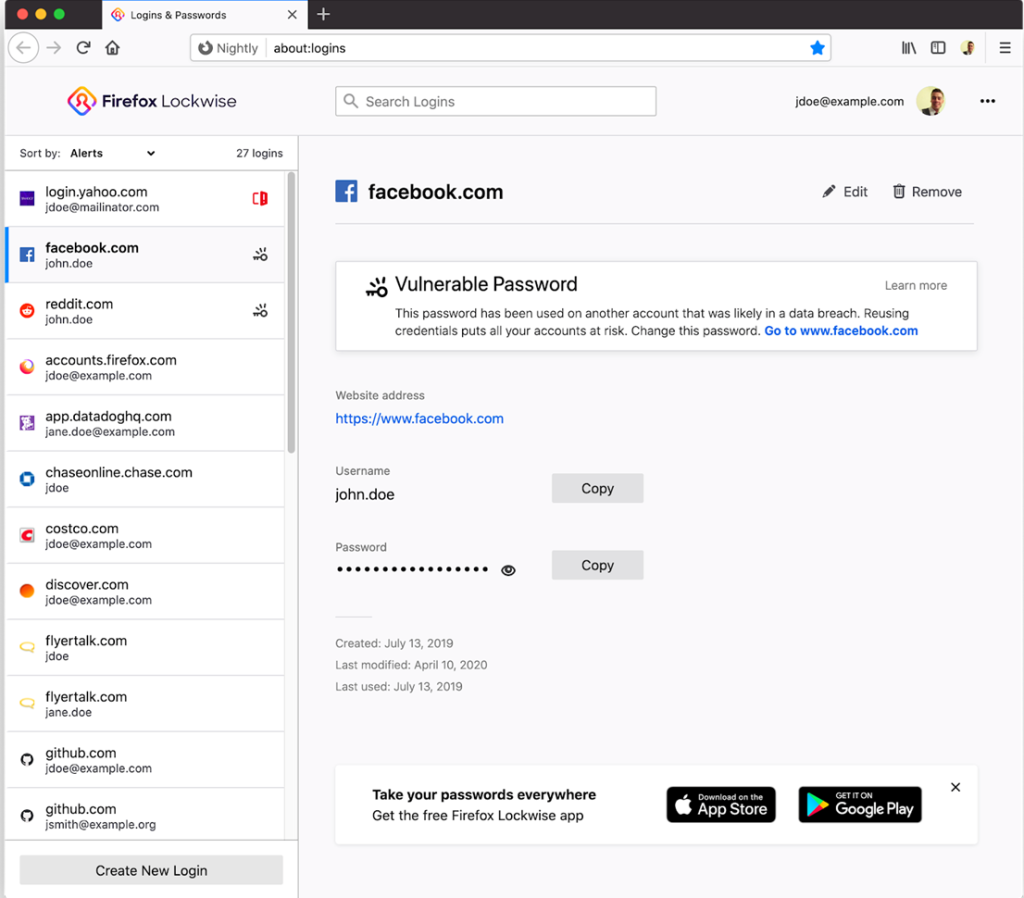 It’s also now easier to check the security of your passwords (click on the hamburger menu button => Logins and Passwords). If any of your online accounts were involved in a website breach or use a vulnerable password, an icon indicator next to the website address will let you know.

Lockwise can also now generate secure passwords (minimum of 12 random letters, numbers, and symbols) for more sites. That means when you’re creating a new account or want to change your password, Lockwise will now ask if you’d like to generate and save a new password.

Firefox 76 adds support for Audio Worklets, which run custom JavaScript audio processing code for applications like VR and gaming on the web. Unlike their predecessor, ScriptProcessorNode, worklets run off the main thread in a similar way to web workers. Mozilla also notes Audio Worklets are “being adopted by some of your favorite software programs.” The company specifically called out Zoom, which has become a phenomenon of its own during the pandemic. In short, you now join Zoom calls in Firefox without having to download or install the Zoom client.

Next up is WebRender, Mozilla’s next-generation GPU-based 2D rendering engine meant to make browsing feel faster and smoother by moving core graphics rendering processes to the GPU. It’s rolling out to more Firefox for Windows users, specifically on modern Intel laptops with a small screen (<= 1920×1200).

There are a few other additions in this release. Here’s the full Firefox 76 for desktop changelog:

Developers are also getting some goodies. Firefox 76 brings better JavaScript debugging (ignore entire folders, collapsed output for larger console snippets, copy full URLs in call stack, and always offer Expand All in JSON preview). There are more network inspection tricks (Action Cable support in WebSocket inspection, hide WebSocket Control Frames by default, double click to resize Network table columns to fit, and improved Network response details and copying). The input input element’s min and max attributes now work correctly when the former’s value is greater than the latter. The numberingSystem and calendar options of the Intl.NumberFormat, Intl.DateTimeFormat, and Intl.RelativeTimeFormat constructors are now enabled by default. The IntersectionObserver() constructor now accepts both Document and Element objects as its root. If you’re a web developer, check out the details here: Firefox 76 for developers.

Theatre on the brink: lending a helping hand to the arts

Need a custom Word template? Here's how to make one in...