A West Australian inmate has made multiple threatening phone calls from jail to the former partner he had attacked, despite a lifetime family violence restraining order (FVRO) being in place to protect her from any contact, a court has heard.

“I am just waiting for the right time.”

Magistrate Christian Miocevich said the victim “should have thought she was safe from [Darby]” while he was in jail.

Police prosecutor Sergeant Carey Owen outlined other breaches of the FVRO, including an incident in August last year when he drove to a remote northern WA Aboriginal community, where the woman had “sought refuge”, and chased her down and punched her in the face.

Sergeant Owen told the court Darby had used deception in making the phone calls from prison and “threatened, intimidated and harassed her”.

She said the lifetime FVRO was imposed after Darby was jailed for two and a half years at the age of 19 for causing the victim grievous bodily harm.

Darby is understood to have fraudulently obtained another prison inmate’s telephone credentials so that he could phone his former partner.

In a statement, a Department of Justice spokeswoman said prison authorities contacted police as soon as they became aware of the breach of the phone call system.

This is how the ‘monster myth’ allows domestic violence to unfold 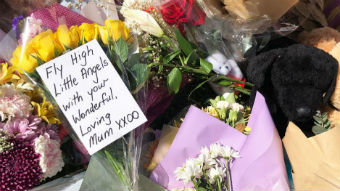 With attempts to rationalise the murder of Hannah Clarke and her children, we risk blaming the monster and not the man, Rowan Baxter, and the society that allowed these murders to unfold.

“Just like a bank account, prisoners are given an identification number and nominate a PIN which prison management strongly encourage prisoners to keep secure and secret,” the statement said.

“In addition, approved telephone numbers for each prisoner are assigned a speed dial number to further de-identify the contact details.

“There is no ability to dial any other number but those that have been loaded into the system and assigned a speed dial destination.

“The PIN for the account has been changed so no further unapproved use can take place.”

The department did not respond to questions of whether the system would be reviewed in light of the incident.

The magistrate sentenced Darby to one year and four months’ jail for the breaches of FVROs, aggravated assault, obstructing police and a previous charge of aggravated burglary.

He noted Darby had been in custody for nine months so was likely to be already eligible for parole.

His parole will be considered by the Prisoner Review Board.

OPPO Find X2: The Most Versatile Flagship Smartphone You Can Buy In India – Gizbot